There are some minor problems. They have pickle spears instead of hamburger dill chips.  The greens were fine, but could have used a touch more side meat. The yeast rolls were  so-so. They offer (shudder!) Pepsi rather than Coca Cola, and right next to the Golden Flake potato chips, at that! The pit man was wearing orange and blue on Iron Bowl day. The macaroni and cheese was simply shells in a cheese sauce.

But the shells were actually al dente and the cheese sauce was very good. The pork was outstanding — tender and smoky, with that extra layer of flavor from pork fat smoke drifting to the meat after hitting the coals, and that great bark that you only get from cooking in a pit over wood.   Barbecue just doesn’t get much better than that.

Miss Myra’s pork doesn’t really need any sauce, but both the red sauce and the white sauce are good and complement the meat rather than smothering it.  They have deviled eggs.  The coconut pie was good — a pretty good crust but lots of coconut in a very good custard.  They have Dr. Pepper.

And Miss Myra’s feels like a good barbecue place.  It’s been there for ages.  They cook over an open pit and, as you can see, the pit craftsman was cooking up a fresh batch of chicken at lunch.

The walls are covered with pictures of Bear Bryant and Shug Jordan — even an ode to the greatest coach of all time. 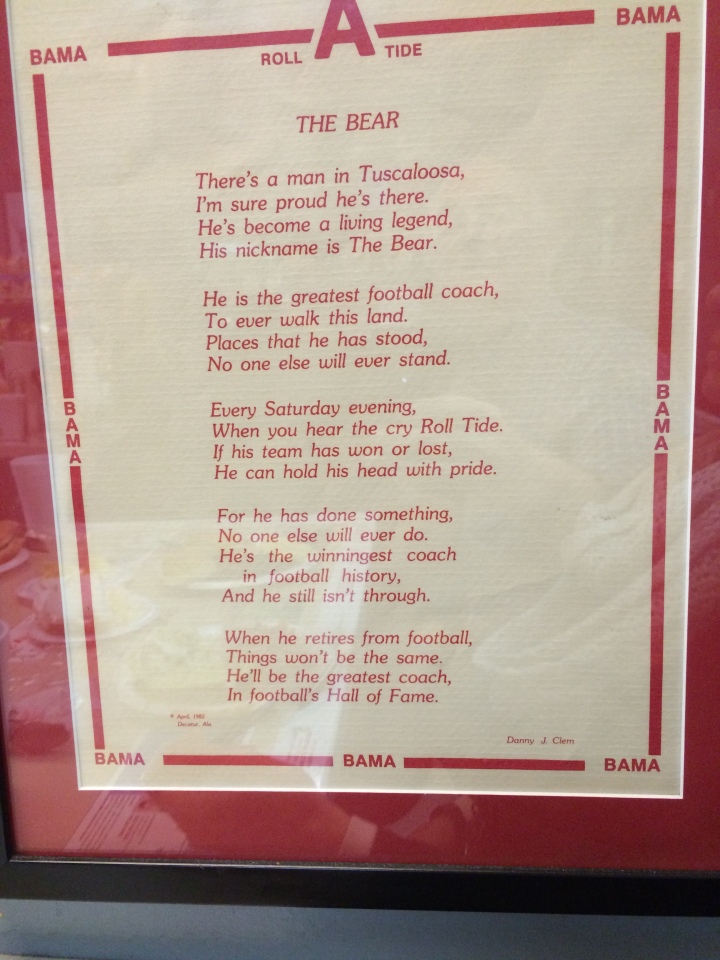 And even though the pit man was wearing orange and blue on Iron Bowl Day, he was wearing his colors.  Everyone — staff and customers alike — was friendly and chatty.  We found that there were two other groups from DC there when we were eating.  I think that’s because when you come from a place like DC where there’s no good barbecue, when you go to Miss Myra’s you are coming home.