DCity Smokehouse has the best barbecue in the District of Columbia.  I will go back, despite some drawbacks. 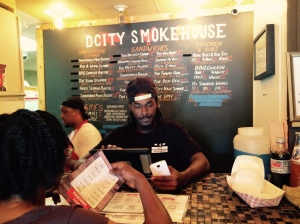 First, it suffers from its location – a storefront at the corner of Florida Avenue and North Capitol Street.  The left half is devoted to food preparation, and the right half is for the many people standing in line, waiting to place their orders, or standing in the narrow space waiting for their orders.  There are five stools at a narrow counter on which it is possible to eat, but certainly not comfortable – and if it were comfortable the stools would all be taken.  Catch 22.  Mostly the stools are used by people waiting for their orders.  And there is no park or other place to eat your take-out order nearby, and all food is served in to-go boxes.  There is no parking other than some on-street spaces in the surrounding neighborhood – not a problem at 2:00 in the afternoon when we went.

The larger location problem is that it is in DC, so it isn’t real barbecue.  Like all DC commercial efforts at barbecue, DCity smokes the meat in a box heated with gas or electricity.  It is not cooked over wood or coals – no commercial open pits in the District of Columbia.  Such is the law in the Capital of a supposedly free country.

So it doesn’t taste like real barbecue but it does taste pretty good.  Nancy had a pork sandwich with slaw and a side of their crisp brussels sprouts, and I had a platter with pork and brisket with a side of collards.  Note – I ignored a sign warning patrons to check their orders, so I did not notice that they omitted the side of slaw I had ordered.

Both the pork and brisket were moist and tasty.  The brisket had that pot roast-ish flavor you get when you cook in a box – a good flavor – and the pork was pretty good.  They tossed it with some of their sauce so that it was a bit sweet. (What is it that makes barbecue places DC add so much sugar to everything?)  Nancy, the slaw maven, pronounced the slaw on her sandwich good.

The crisp brussels sprouts, however, suffered from the location.  In fairness, it was over 90 when we went and in good weather you could stand by your car and eat.  Indeed, a number of people were lounging about consuming other products.  With no place to eat nearby, the food steams in its cardboard box until you get someplace to sit down.  By the time we got home the brussels sprouts were soggy.  That was a shame – they really looked as if they would have been great.

The collards were spicy but far too sweet, with no discernible evidence of pork.  Perhaps they are  actually vegetarian, unlike most vegetables served in barbecue places.  The biggest problem was that they were whole leaves, each leaf about the size of a sheet of paper, so that they were very difficult to eat.  How hard is it to chop collards before you cook them?  It’s nearly impossible to slice them with a plastic fork while they’re in their plastic container.  An utter and complete collard fail.

That’s a lot of criticism for a place that is very popular but most of the pitfalls can be avoided once you are aware of them. I will go back and try the chicken and probably the brisket again, perhaps on one of their sandwiches – some look interesting.  And I’ll try their green chili cheese grits, and – in nice weather – the crispy brussels sprouts.