If you are driving down 65 from Birmingham to Montgomery you probably will exit when you see the water tower, painted like a giant peach, the sign that heralds that Chilton County peaches for sale.  And if the wind is right, you’ll catch a whiff of hickory smoke and go on down the road a bit to B and K barbecue. 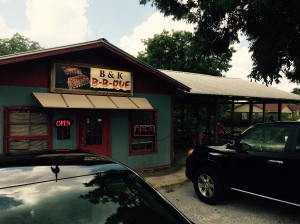 It looks promising, although the sign for “shaved” ice is, well, a bit off message – an omen? – but you don’t really think about it because there’s a hickory tree out front and B and K looks like a barbecue place should.  And there’s a roomy outside dining area on the side of the building that looks inviting.

The outside area is the more inviting because there are only a few crowd tables inside.  Even more promising once you step inside is the sight of a pit, the absolute best way to cook barbecue. 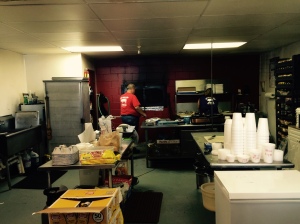 I was also pleased that there were a couple of local guys sitting at a table, the first trying to persuade the other that he should help the first “clear the field” so that he could run unopposed for some city or county office.  I confidently ordered a pork sandwich and one rib.  They gave me two ribs.  Small ribs, but they did give me two.  I was happy.

How disappointing!  Perhaps I should have heeded the warning the shaved ice sign, or the fact that they had Lay’s rather than Golden Flake potato chips – and I certainly should have noted the utter absence of a photo of ANY college football players or coaches, not even a picture of Bear Bryant.  Perhaps I was distracted by the political machinations or by the slice of pecan pie on the counter.  The ribs were fatty in that way that makes you think they boiled them before putting them on the pit.  They were falling off the bone with none of the give that marks good pit-cooked ribs.  And the pork on my sandwich was mushy.  It had an extremely fine chop – fine even by North Carolina standards – and it was smothered in a glop of heavy sauce that smothered the meat.  (The use in North Carolina of vinegar and pepper-based sauces  brings out the flavor and nicely balances the richness of the pork.  A thick sauce on finely chopped meat turns it into a sort of Sloppy Joe.  See this post.)  What a waste of a barbecue pit!  I didn’t finish the meal.  One my way back to the car I took a group picture for a family from Kentucky who had stopped at B and K on their way to the beach and were trying to take a selfie of five people.  It’s chilling to think that they might consider B and K representative of Alabama barbecue.

I drove on, taking what solace I could from anticipation of the bag of boil’ peanuts and the Chilton County peaches I had purchased at the peach stand.