I am a big fan of the Birmingham airport.  The  rental cars are on site, there’s plenty of close-in parking when you’re picking someone up, and they have a Jim and Nick’s Barbecue restaurant on site, a Chick-fil-A if you’re in a hurry, and opportunities to get a Good People IPA.   Jim and Nicks is one of the most dependable barbecue chains around – maybe the most dependable.  And they get  points for promoting the raising of heritage pigs and the formation of the Fatback Collective mentioned in the Alabama Public television series about which I posted a couple of days ago.  You can find details of the Collective at  http://www.jimnnicks.com/community/fatback-collective/.

On my last trip, I had an early flight and had the breakfast tacos.

That’s scrambled eggs on pulled pork.  It comes with their own salsa, here obscured by the paper, which had a smoky flavor but was a bit watery.

They give you a remarkable amount of pork.  One taco would be a good breakfast for one person.  Two tacos requires a real commitment.  That’s a lot of food for $7.50. 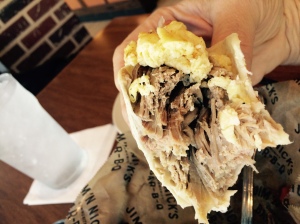 There were two problems.  The first is that it tasted as if it had been cooked yesterday and reheated carelessly – in an oven, I think, but possibly a microwave.  Apparently they don’t care enough to have someone cooking overnight to ensure a fresh product.  I suppose that’s understandable in the context of a steadily declining western civilization.  It didn’t taste bad, but it was not up to their usual high standards.

The second problem was that the pork was pulled rather than chopped.  People talk a lot about pulled pork, and that’s fine if you pull large chunks away from the bone and then chop it up.  Long strands of pork, however tender the meat, have a stringiness that chopping against the grain cures.  That’s why you slice a flank steak across the grain.  It also promotes a better distribution of the inside and outside meat.   Barbecue without some bark is just not as good.

I got fruit instead of potatoes as a side.  When you eat as much barbecue as I do, you have to make sacrifices.  Actually, the fruit was fresh and tasty.

Nest time I might get the brisket hash with a couple of eggs over easy.

The Birmingham airport has fallen down in one regard.  They used to sell Ollie’s Barbecue Sauce inside security, so you could bring a bottle or three home.  No more.  You can still get barbecue sauce in the airport, but not Ollie’s.

I didn’t see any Auburn-related sauces.

One thought on “Jim and Nick’s in the Birmingham Airport”