Alamo BBQ is in the Church Hill section of Richmond.  Church Hill is the original plat of Richmond, the site of many lovely historic homes and of St. John’s Church, where Patrick Henry gave his “Liberty or Death” speech.  Church Hill was more or less cut off from downtown Richmond after I 95 smashed its way through the city, but the area is now undergoing gentrification, as was apparent at the Alamo BBQ when we ate there.  The place was swarming with young parents and their pre-school children.  It was very pleasant.

The facility itself is unprepossessing.

More favorably, Alamo has offset-firebox grills outside that were still warm to the touch when we got there for a late lunch.  And they use real wood.  Add points for Alamo. 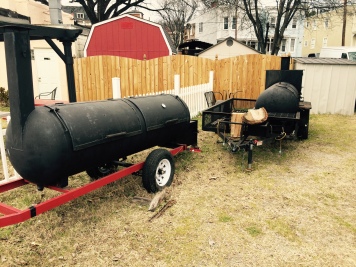 The menu looks fine — you expect things like the portabello and tilapia options in a gentrifying neighborhood, I suppose — and they have a small but good beer selection, a benefit of gentrification.

Nancy got the pork with cole slaw and I got the 2-meat plate with pork and beef with greens, cole slaw and jalapeño macaroni and cheese.

I should explain my frequent choice of two- or three-meat platters.  My college friend, Roy Crandall, expressed alarm over my diet as reflected in this blog.  He cannot believe that I do not suffer cruelly from permanent acid reflux and other maladies too unpleasant to mention.  Rest assured, I suffer no such problems.  I have spent decades terrifying my system into submission.  Personally, I would prefer to have  only one meat and save room for pie or ‘nana pudding.  I do it all for the blog. 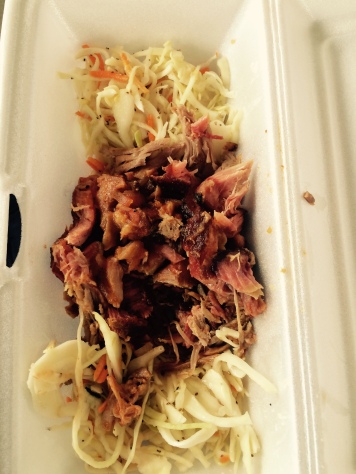 The greens and cole slaw were ok, but the meat –- well, Nancy captured it when she said that her pork wasn’t as good as she’d had the day before at the Dean Dome.  Given the use of the offset smokers and real wood, the brisket in particular should have been good.  The meat, however, came mixed with a sauce that had no independent taste itself but smothered the taste of the meat and the smoke — a sort of black hole for flavor.  I’ve had really bad barbecue sauces but never one that was simply a taste-killer.  I wonder if the sauce is somehow related to whatever it is that gets dogs to eat some of the things they eat.

The upshot is that I have absolutely no idea what the food could taste like without the black hole sauce. Next time I’m in Richmond I might go there and see if they’ll serve me some meat without any sauce.  Either way, I’ll get a double portion of the jalapeño macaroni and cheese.