You may not think of Palm Springs, California, as a place for barbecue. You think of movie stars, Elvis (did you know he spent his honeymoon there?), Sinatra, etc.  Half of the streets in Palm Springs seem to be named after movie stars.

Barbecue is hot there, and no place is hotter than the Smoke Tree.  The Desert Sun gave it a good review, and LA Eater picked Smoke Tree BBQ as a hot new restaurant. http://la.eater.com,/maps/Palm-Springs-new-hot-restaurants-heatmap-december-2014.  If that weren’t enough, the local Ladies Night Out awarded it a Best of the Desert Dining Award.

As it turns out, the glamour of Palm Springs is finite. Nancy and I went to Smoke Tree for carry-out for Mike (Liza opted to work on the leftover chicken from the steak, chicken and shrimp fajita feast she and Mike prepared the night before), my niece Anne Rain Tanner and her fiancé, Hunter Brown, and, of course, ourselves. 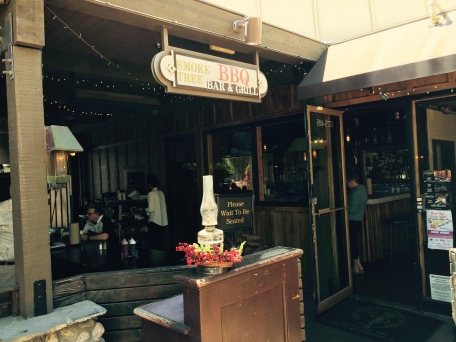 Smoke Tree is tucked into an unassuming shopping center. Most of the dining space is outdoors, as is the smoker –- a tall box smoker in a caged area.

They use real wood, which is a good sign. I’m pretty sure that’s mesquite, although I’m mainly certain that it isn’t hickory or oak. It could be cherry. I have not learned to identify logs from their bark or grain.  I’m somewhat better at leaves, but pretty slack there, too.  Tip:  If your child ever gets a school assignment to identify leaves of different types of trees, go to a nursery.

Back to Palm Springs glamour. The outdoor seating was dominated by a long table –- actually a series of tables end to end — with 20 guys, each of whom was significantly older and fatter than I, which is going some. They were finishing up and all 20 demanded separate checks.  My heart went out to the server.  I didn’t think to ask if they were associated with the Ladies Night Out group.

Everyone in our group wanted a Carolina pulled pork sandwich, which comes topped with cole slaw.  I wanted to get a quarter pound each of brisket and pork and maybe a sausage (they have a variety of sausages) or a rib or two.  They serve meat by the pound, but you have to buy it by the whole pound.  You can get a half slab of ribs to eat there but you have to get a whole slab to go. I wasn’t that hungry so I got a brisket sandwich if only so we all wouldn’t be eating the same thing.  I’m funny about that. 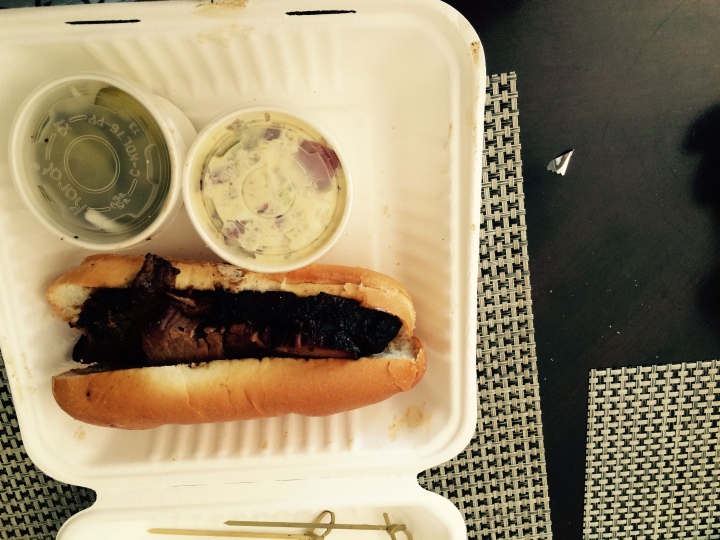 It wasn’t very good.  The brisket was dry, and was served on a commercial sub roll that was not as fresh as it might have been.  The pickles and onions helped, but not much.  I had made a point of asking for sauce on the side to avoid masking the flavor of the meat, but added it to counter the dryness.  It was sweet.  Strike three.

The pork sandwiches came loaded with cole slaw and a “Carolina Gold” sauce, which I suppose is a glamorous way of describing a mustard-based sauce.  I tasted it and decided it would smother rather than enhance the meat.  It was a far cry from the excellent mustard-based sauce at Shuler’s.  The pork itself had some char and a nice smoke ring, but despite all of that sauce and slaw, it was as dry as the brisket.  And it came on a sub roll of similar age and affliction.  Hunter and others added more sauce.

The slaw didn’t excite much comment.  They describe it as “Horsey Creamy Cole Slaw.”  I didn’t find that too appealing.  I did like the potato salad.  It had a good potato taste and was not overloaded with mayonnaise or horses.  (Only later did I realize that the “horsey” referred to horseradish.)

Hunter had asked about banana pudding but it wasn’t on the online menu.   As it turns out,  they did have it, so we got a couple, to Hunter’s delight (and mine).  It was good, with a lot of banana taste.   I thought it was overloaded a bit with extra whipped cream, including a layer of whipped cream across the middle of the pudding — a sort of banana pudding Napoleon.  I certainly have nothing against whipped cream, but I would rather go straight to the banana pudding.

I may be too hard on Smoke Tree’s barbecue.  The problem may not have been so much with the quality of the meat as with their set-up.  The staff had to go into the cage to get the meat and then take it to the kitchen for slicing or chopping.  That is certainly doable but it requires close attention and adequate staffing to get freshly cut meat from the pit to the counter quickly.  Otherwise  the meat dries out while you’re wrestling with 20 separate checks.  But then the rolls went stale before the 20 guys showed up. They clearly have a quality control problem.

At any rate, Smoke Tree was a dud.  The local enthusiasm for it does not speak well for the state of Southern California barbecue.