That was my reaction to my first bite of brisket at Pendergast in Amsterdam.  I was stunned by the taste, especially the taste of the crust.  I turned to Nancy and said, “This is amazing!”

Nancy and I went to Pendergast largely out of a sense of duty to the Blog.   How good could barbecue be in the Netherlands?  Even the Amsterdam Tourist web site concedes that the Netherlands “is not known for its cuisine.”  I really did not expect good barbecue anywhere in Europe.  Actually, I don’t expect to get brisket nearly that good in the United States.  Pendergast would be well above average if you plunked it down in central Texas.  This is “100 mile barbecue,” worth driving that far for a meal.

We stopped by between meals, just as they opened for dinner at 5:00 p.m., well before the dinner rush. 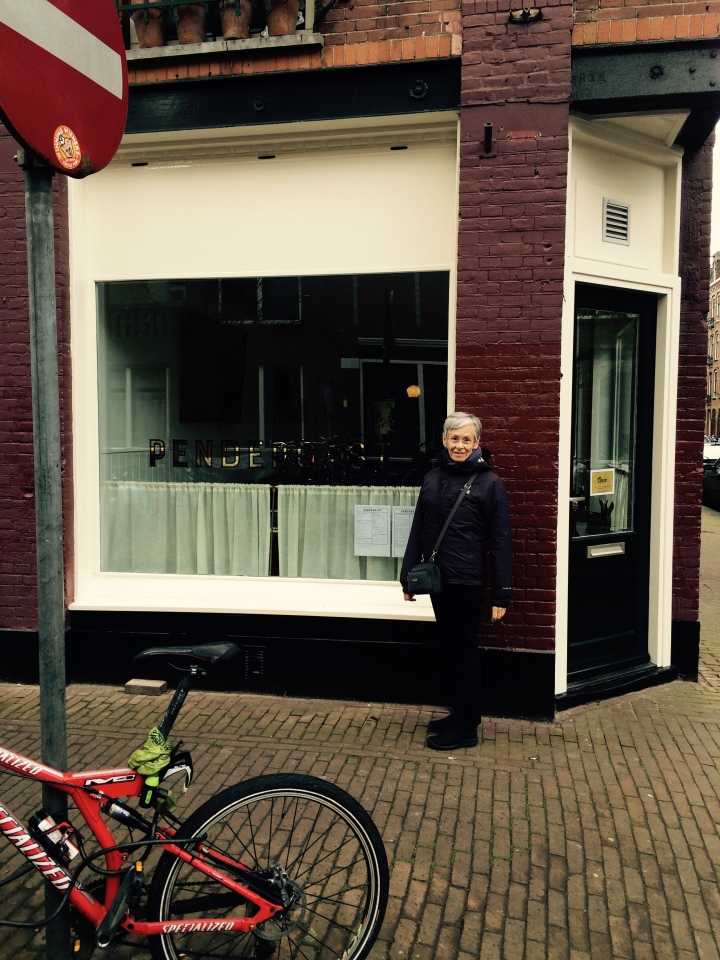 Although Pendergast was booked solid for the evening, Chef Brandon Woodruff graciously put together a sample tray for us, with brisket, pork, pork ribs, corn bread, and mashed potatoes.  I started eating before taking the picture. 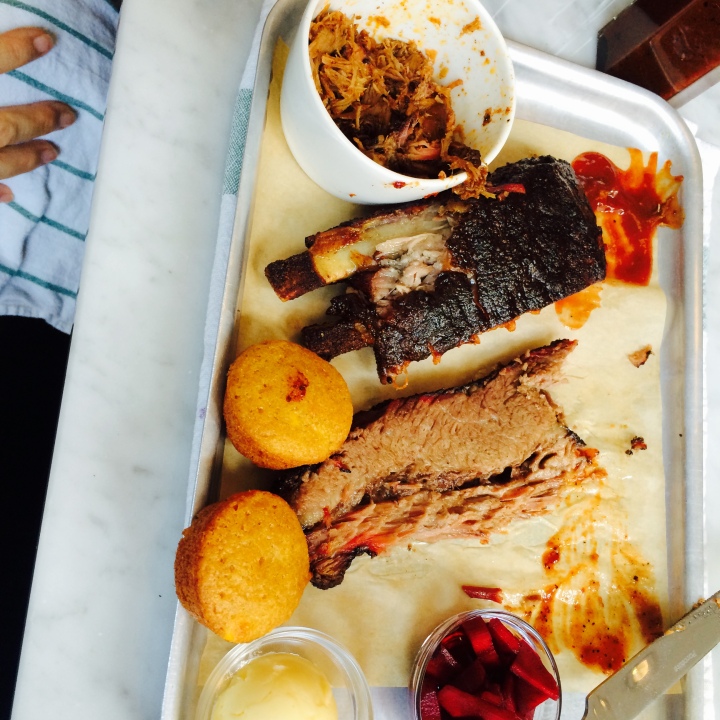 The brisket was sensational, moist, tender and smoky with a truly outstanding bark.  The pork ribs were just as good, again with that terrific bark.  Nancy thought the ribs were a touch fatty, but then Nancy is strongly anti-fat.  I thought that the fat was just right:  to me, the modest amount of fat was a feature, not a bug.  The pulled (and properly chopped) pork was about as good pork gets without hickory and a pit.  Nancy loved it.  I can’t remember her digging in as enthusiastically.  Nancy also loved the sauce, a well-spiced tomato-based sauce with a modest touch of sweetness so that it enhances the meat rather than smothering it.  It’s in the range of the sauce at the Golden Rule or Bob Sykes.  The cornbread was good and the mashed potatoes,  cooked with garlic and cream were very good.  (The purple things are pickled carrots, which are very good.  Carrots, by the way, come in many colors.  Orange carrots are a hybrid developed in the Netherlands during their glory days to honor, I suppose, the House of Orange).

Each of the sides was top-notch.  The black-eyed peas tasted like Alabama black-eyed peas.  The aptly named meaty beans were mixed with generous chunks of brisket and blessedly free of molasses and sugar, the main enemies of bean flavor.  The collard greens actually were kale (can you even get collards in the Netherlands?) cooked with garlic and a touch of chili rather than with pork fat, and with a flavor not unlike the green beans at Demetri’s in Birmingham.  Tasty.

We had a sliver of bourbon pecan pie.  Excellent.

While Pendergast never compromises the USA roots of their barbecue, they do adapt to European tastes.  Rather than fried dill pickles, Pendergast serves buttermilk-fried olives.  The appetizers include a smoked trout brandade (perhaps the only occurrence of the word “brandade” on a barbecue menu in the world).  They have hot-smoked salmon and, for vegetarians, smoked seitan — the only main course that is not gluten-free.

In addition to a range of beer styles, there is a much larger than usual wine list — how many barbecue places offer champagne? — and coffee prepared about as many ways as at Starbucks.

Brandon Woodruff grew up in Kansas City (as a Gate’s person) and chose Pendergast as the name for his place in homage to the famous Kansas City political boss, Tom Pendergast.  Boss Tom made certain that Prohibition was not enforced in Kansas City through an open-handed approach to bribery.  The lure of wide-open night clubs attracted a lot of jazz and barbecue talent to Kansas City.  Also the Mafia, but then you have to break eggs if you want to make an omelet.

Brandon left a successful corporate career (Starbucks) to pursue his barbecue passion.  He clearly has studied and mastered his craft.  Only salt, pepper, smoking apple logs (not chips or pellets), and time achieve the  world-class char on the brisket.  He uses an Ole Hickory smoker with a ridiculously extensive exhaust system (to satisfy European sensibilities). In most hands box smokers produce mediocre to pretty bad barbecue.  Brandon’s results bring to mind Peanuts — with Shroeder playing Beethoven on a piano with the black keys painted on.  It helps that he uses quality ingredients — Angus beef from the US, Duroc pigs — but as places like Back Alley Barbecue in DC show, top quality ingredients can result in lousy barbecue.  It’s Brandon’s skill with the smoke and heat that makes the difference.

Pendergast opened in January, and in April the place already was full.  I didn’t exactly beg him to open a place in DC, but I gave it a push.

Pendergast is just beyond the Jordaan area, where you’ll spend a lot of time while in Amsterdam, and Westerpark.  It’s a nice place, free of a lot of junk on the walls.  It has the feel of a bistro rather than a theme park.

If you’re in, well, Western Europe you definitely should go to Pendergast.

And while you’re at it, click “follow” on our front page to receive blog posts in your email box.  Or bookmark us and check in from time to time.  If you’re planning a trip, you can “Search” the name of the destination city, state, or country for good restaurants (in Europe, often close to sites, like the Louvre or the Van Gogh Museum (which is included in , that you’ll want to visit in any event).  Comments, questions, and suggestions of places to eat or stories to cover are very welcome.  And check out our Instagram page, johntannerbbq.