I went down to Birmingham Tuesday morning to see how Dear is doing.  Call it  Mother’s Day Observed.  Dear suggested barbecue for lunch, knowing, of course, that I would want barbecue.  We went to Carlile’s, on 6th Avenue South, next door to Sneaky Pete’s, one of the truly great purveyors of chili dogs. 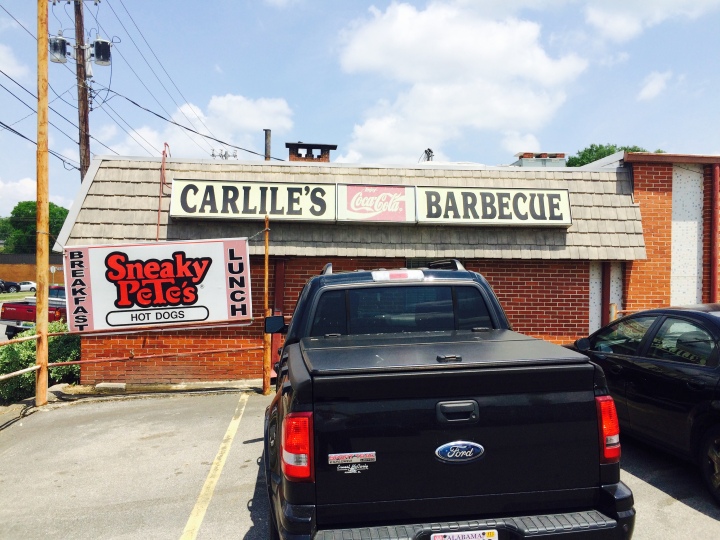 Those who were impressed by the elaborate smoke exhaust systems in Europe — at Pendergast and the Beast — will note the blackened chimney on the roof.  That’s the exhaust system at Carlile’s.  It is typical of Alabama barbecue exhaust systems.  In Europe and in deprived parts of the United States, see, e.g., here the heavenly but, for them, unfamiliar smoke from a barbecue pit is unwelcome.  In Birmingham, it raises property values.

Carlile’s is an institution in Birmingham.  It’s a good sized place with three separate rooms, all of which had started filling when we arrived just after 11:00 a.m., Dear’s usual lunch time at the Greenbriar. 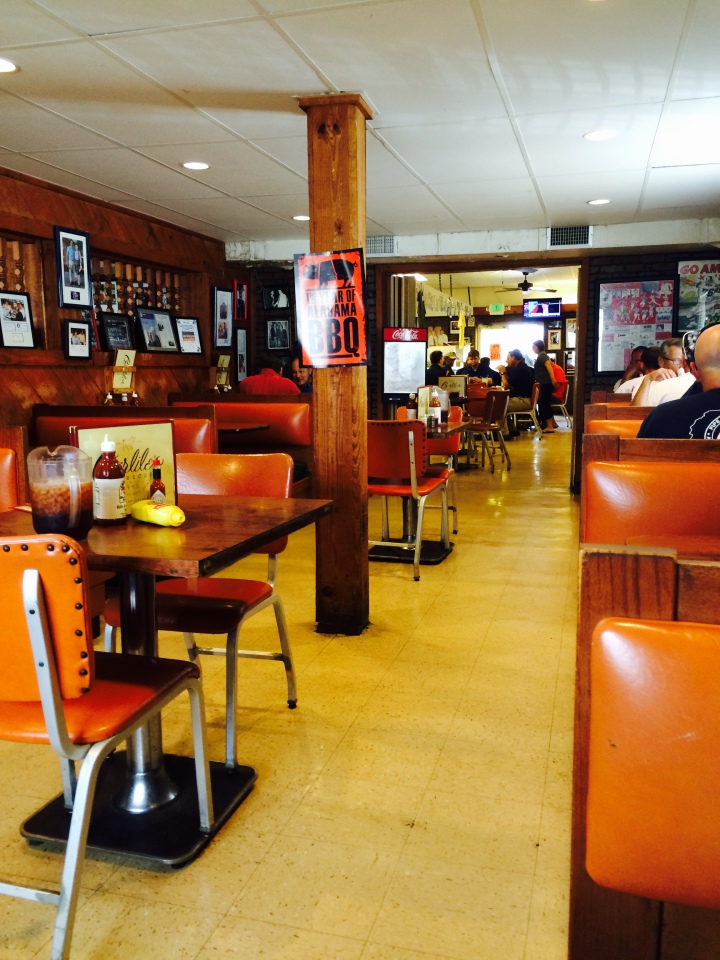 At one time a morning radio show was broadcast from Carlile’s.  The walls are lined with photographs of customers, tributes, and sports memorabilia.  Sir Charles (Barkley) was looking over our shoulders.

Carlile’s cooks pork butts,  pork ribs, brisket, sausage, and chicken over a pit.  They have a nice sauce — a combination of mustard, vinegar, Worcestershire sauce, and sundry spices.  This is a sauce that, used judiciously, enhances the meat rather than covers up inadequacies.   I imagine it also is really good on french fries.  There is a separate, thicker sauce that is sweeter.  That’s just the sort of sauce that people put on ribs so they can maximize the mess they make.

Dear had a pork sandwich and I had a two-meat plate — pork and two ribs — with green beans and potato salad. 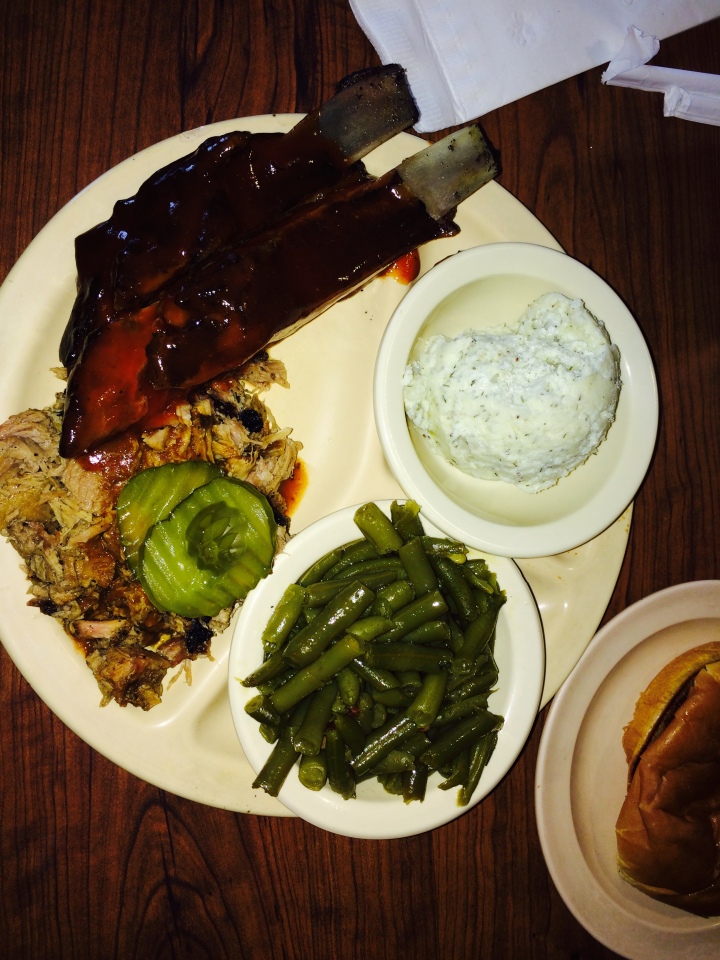 That’s a pretty bad photo, isn’t it?  My apologies to Carlile’s. But, Oh, how good it tasted.  How good it is to get back to the land of pit-cooked barbecue pork!  There’s nothing like the taste of pork cooked over direct heat in brick pit, with the pork fat dripping down on hickory coals and turning to pork smoke, adding a new layer of flavor. 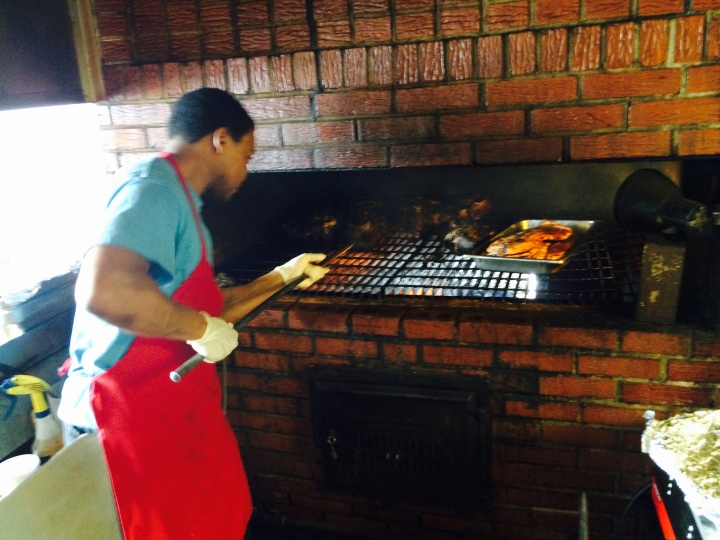 Cooking over direct heat requires tremendous skill, lest the fat flare and scorch the meat, or the fire get too hot and dry the meat.  Cooking whole hogs, the way they barbecue in eastern North Carolina, is even harder than cooking shoulders and butts, as they do in Birmingham and most of the Deep South: someone has to watch the meat and the fire all night long.  Pork butts usually take “only” about six to ten hours.  The box smokers that most places use are harder to mess  up — although people certainly do — and they are all but impossible to match the pit quality.   With a skillful pit master, the combination of pork fat smoke and hickory smoke has a magical effect on the taste and texture of the pork, and particularly the char.

And Carlile’s had a very skillful pt master. The pork at Carlile’s was delicious.  Dear was very enthusiastic.  She said it was now her favorite place. 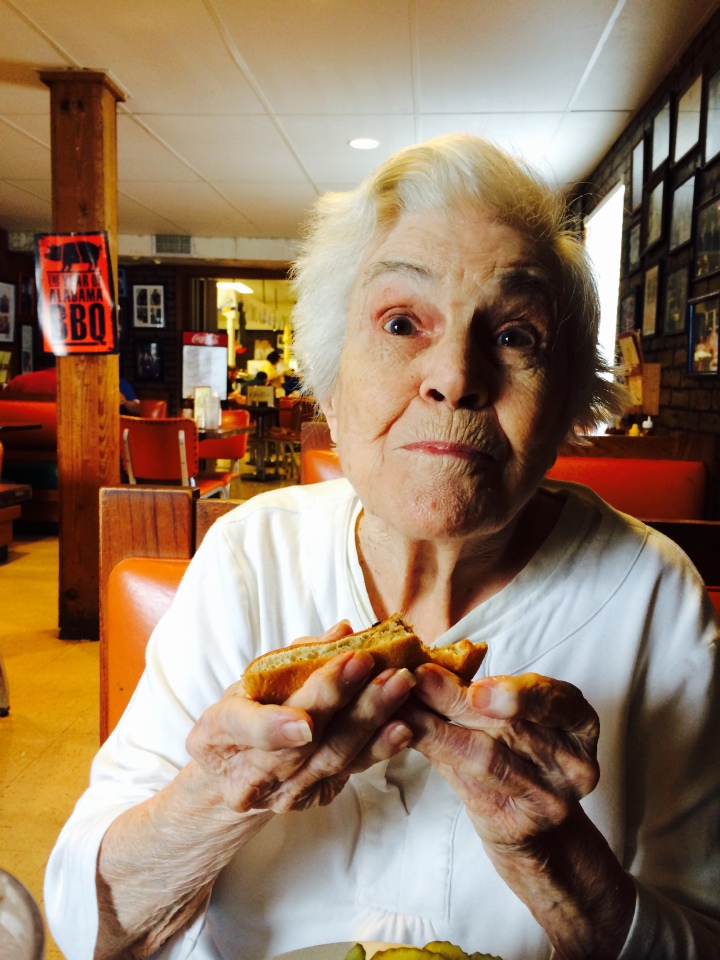 The ribs were good — nice and meaty. 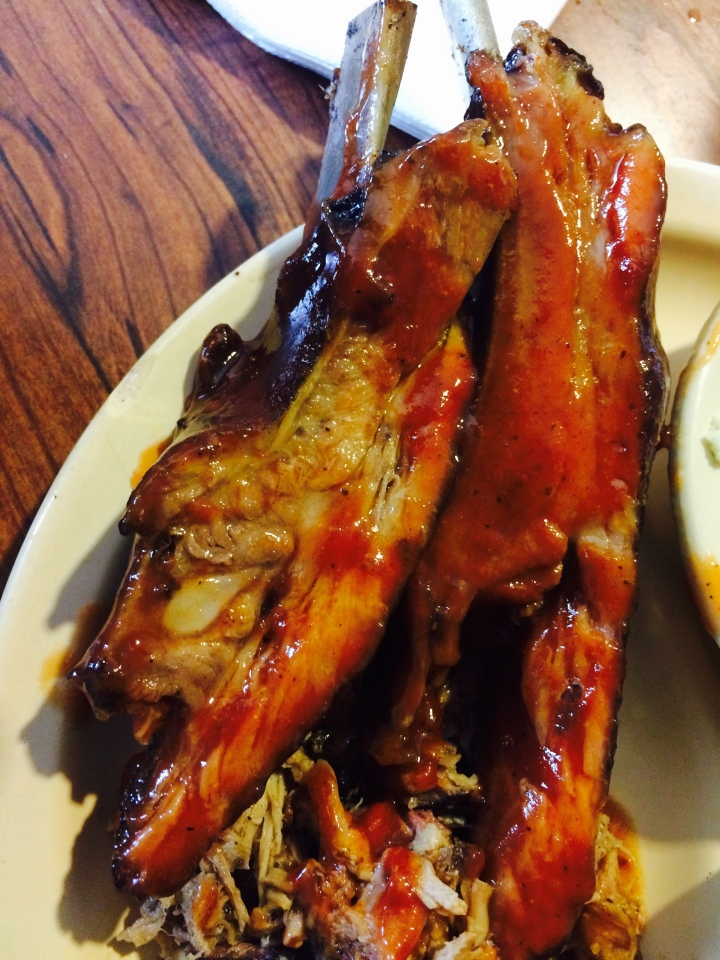 Some people might think they were just a  touch on the chewy side, but then ribs should be al dente, not mushy as they so often are.   The green beans were good, traditional green beans flavored with pork, salt, and pepper.  I gave them a splash of pepper vinegar.  The potato salad tasted good.  As you can see it was blended thoroughly and scooped.  I prefer chunks of potato and a touch of mustard in potato salad, but I ate it all and enjoyed it.

All in all, it made for a great Mother’s Day Observed. 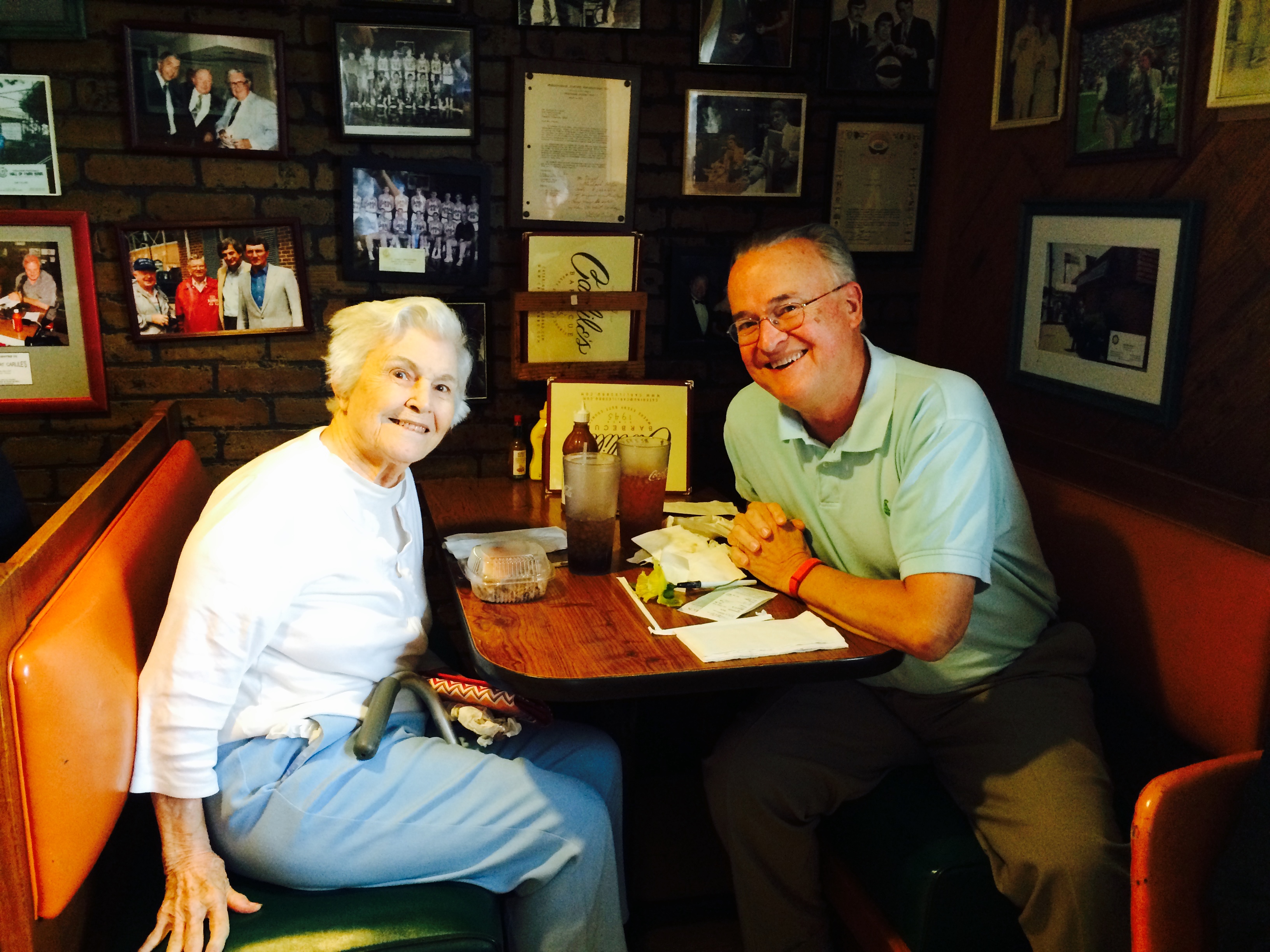 I’d been to Carlile’s perhaps 30 years ago, but not since. I need to thank Nancy for giving me this blog for Father’s Day and spurring me to try new places and visit old friends.

Give Carlile’s a try.  You’ll thank me.