As you will recall, I spoke to the Barbecue Club at St. Anselm’s Abbey School here in DC a while back.  https://johntannersbbqblog.wordpress.com/2016/02/25/st-anselms-abbey-school-washington-dc/.  St. Anselm’s Abbey is a school for smart people who — and this is unusual — not only (a) get smarter while there, but also (b) learn valuable life skills, such as how to make barbecue.  The Barbecue Club there doesn’t just go around trying new barbecue places (that would be a Barbecue Blogging Club).  They actually learn how to make barbecue, one of the most valuable life skills.  Discere vivendo.

And learn they did.  Here’s my first cousin once removed, Barbecue Club Founder and President, Murray Johnston IV (the Student Formerly Known as Cuatro in the earlier post), sans Batman outfit, slicing one of three briskets they cooked. 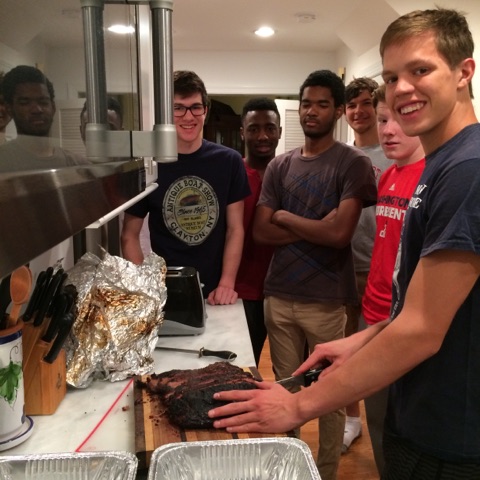 That, by the way, is exactly how thick a slice of brisket should be.  And here’s a whole lot of brisket. 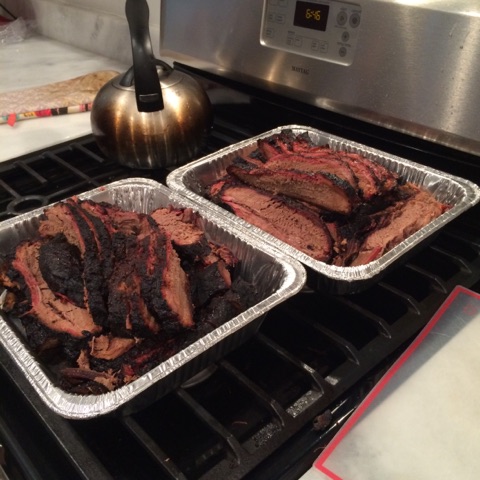 They Barbecue Club members also learned how to make greens: with pork.

Murray is about to graduate from St. Anselm’s.  In June he’s off to West Point, another school that will make him smarter and teach him additional valuable life skills — more than any other college in the country, I think.  We all are very proud of Murray and wish him Godspeed.