Black-Eyed Sally’s is a Blues and Barbecue place in downtown Hartford.  Nancy and I stumbled upon it at the end of our 10k volksmarch* in Hartford, the day after her high school reunion in Glastonbury.  I entered with some trepidation (Barbecue in Hartford?  Good food in a music venue?), but was very pleasantly surprised.

Black-Eyed Sally’s has something of a dark, juke joint atmosphere, as one would expect in a Blues venue.  Attractive art on the walls and the friendly service brighten it considerably.  It was very pleasant.

Nancy ordered a salad with grilled shrimp that she enjoyed.  The shrimp were good and the greens were fresh.  She was pleased. 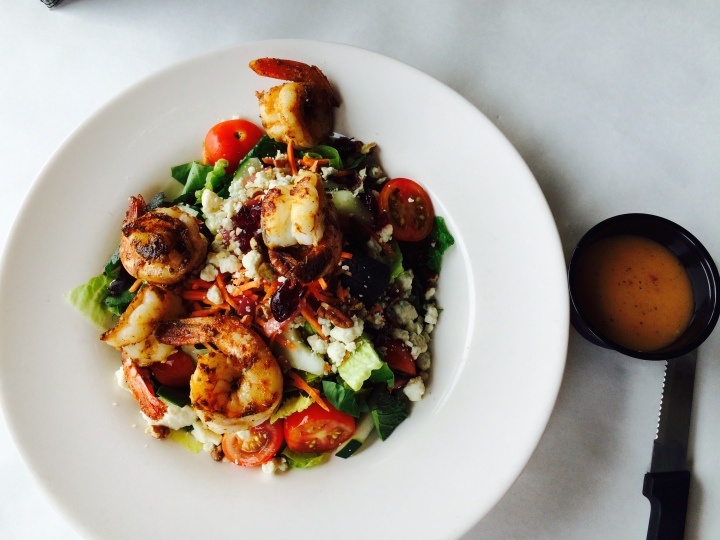 Black-Eyed Sally’s menu highlights their pork sandwich as the house specialty, but in the interest of a broader sampling, I got the piglet platter –- pork, ribs, and sausage, with cheese grits and red beans and rice on the side. 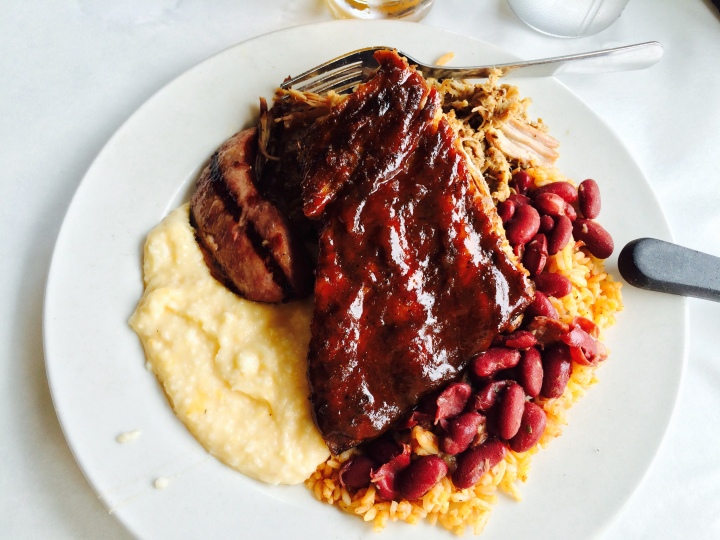 There was a lot of pork underneath the ribs, and it was really good.  Sally’s uses a Cook Shack smoker, and they know how to use it.  They succeeded in imparting an honest smoke flavor to the meat.  And they had tossed the pork in a light vinegar-based sauce.  I can see why Sally’s is proud of the pork sandwich.  Black Eyed Sally’s is the best pork I have had in a restaurant north of the North Carolina line.  Well done, Sally.

The ribs were spare rather than baby back, and tasted good.  The sausage was fine. They could get something spicier.   I really enjoyed the cheese grits -– I hadn’t had any in a while -– and I enjoyed the red beans and rice.  I could taste the meat with which the beans had been cooked, and a few dashes of Crystal hot sauce kicked them up a notch.  I also had a Sea Hag IPA by New England Brewing, and if I see it for sale again, I’ll have another.

All in all, it was a fine meal.  Black-Eyed Sally’s offers a lot of good food at a reasonable price.  Along with Salvage in Portland, it is evidence of a welcome influx of good barbecue into New England, similar to the emerging availability of good barbecue in Europe, vide Pendergast Smokehouse and The Beast. Things are getting better, it seems, everywhere except the DC area.  (Sigh.)

Glastonbury, by the way, is a lovely. lovely town. Main Street has house after house built in the 17th and 18th centuries.   It seems that Glastonbury was blessed with a house-moving company in the 1950s, the years of the historic building holocaust, so people moved houses rather than tearing them down.  It also seems to be a Hartford area dining destination, with 109 restaurants.   We had a good lunch at Bin228.

*Volksmarches, for those new to the Blog, are guided walks that take you past interesting and attractive areas — the areas local folks want to show off.  you can find them in cities and parks all across the US.  See http://www2.ava.org.  They usually are 10k, but many place have 5k alternative routes.  Nancy and I are on a quest to do volksmarches in all 50 state capitals.  Hartford was #16.