Joe’s Kansas City neé Oklahoma Joe’s gets a lot of attention, the sort of attention that Arthur Bryant’s used to get when Calvin Trillin was the only national writer who wrote about barbecue.  Doug Jacobson, the Kansas City Barbecue Maven, tells me that Joe’s is overrated, that it gets a lot of attention because the original location is in a gas station, and the reverse chic of a barbecue place in a gas station attracted the attention of visiting sports announcers, and then the likes of Anthony Burdain and Adam Richman.  But then being overrated among Kansas City barbecue places can mean that it’s still pretty good.  My friend, Darryl Morin enjoyed it when it was still Oklahoma Joe’s.  Darryl came up in Texas, and he knows barbecue.

We have a more recent report from our Senior Legal Correspondent, Prof. Paul Horwitz of the University of Alabama Law School in Tuscaloosa, the home of Archibald’s and Dreamland, among many other barbecue places: Paul has an educated palate.  Paul stopped in at Kansas City Joe’s on a road trip to Salt Lake.  (For an operation  The 15-20 pills a day he mentions were not recreational.)  Here’s his report:

“Good, even very good, but two days in a car, BBQ dinners two nights in a row, and some 15-20 pills a day are not ideal conditions. I feel as bloated as a dead animal in the hot sun. Worth it, of course. Have you been? The reviewers’ advice to get the burnt ends was quite right; they are worth the trip. Also got the ribs, which were very good but not Archibald’s good; tough to judge since I ate them warm in the car, not hot in the restaurant, but I didn’t think they were as good as Archibald’s or even Dreamland on a good rather than average day. And it’s in a gas station, sort of (the inside is large and nice, if crowded), which adds some extra atmosphere. Good spice mix on the fries; haven’t tried the beans yet. A couple more bites of everything tonight, then off to the vomitorium, and so to bed.”

As you can see, Paul puts the pep in dyspeptic.   Paul took a shot of the menu. 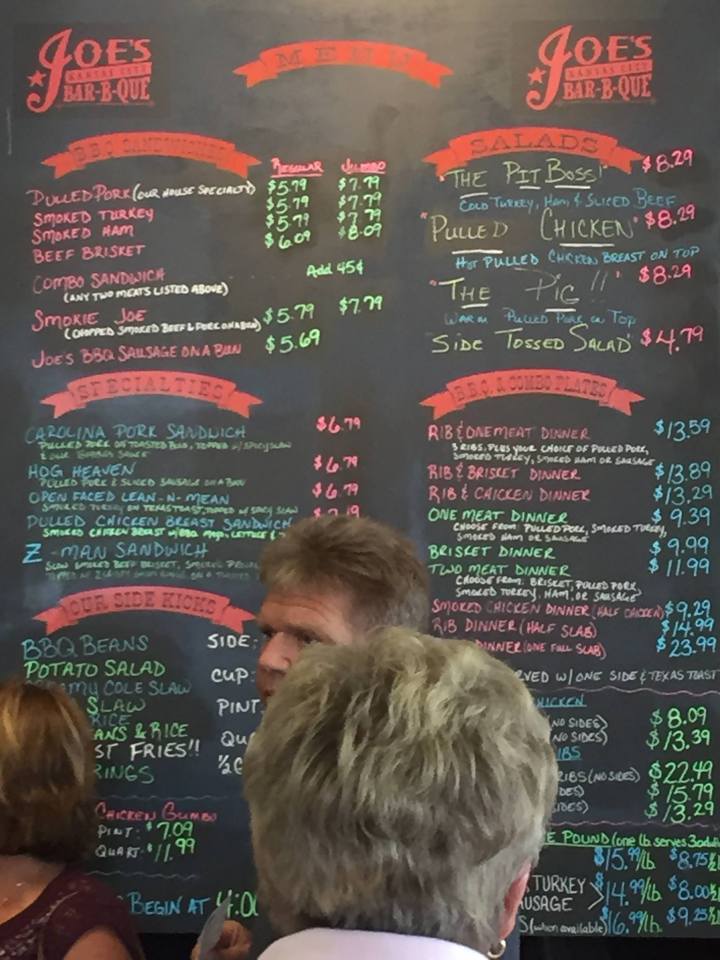 The prices look reasonable, especially in comparison to DC prices.