On our way back from Florida, Nancy and I stopped at Home Team Barbecue, one of the places on the invaluable South Carolina 100 Mile Barbecue list.  There are three locations in the Charleston area.  We went to the West Ashley one.  It’s a pretty new place made to look old — tin siding and lots of unstained wood.

We found a place to park around back and enter through the rear door.

That’s the best way to enter, because you’re greeted by the smell of smoke and meat.

The rustic theme continues inside — more tin — but it’s really a prosperous young adults’ sports bar atmosphere, especially on a Sunday afternoon during football season.  It reminded me of SAW’s Juke Joint in Mountain Brook.  They have bands in the evenings and a selection of craft beers (but I had more driving to do).  And they have specialty cocktails.  It may not surprise readers to find that I don’t approve of specialty cocktails in general and in barbecue places in particular,* but this is America and, if you want to, you are free to ruin some perfectly good whiskey by adding smoked maple syrup to it.

And Home Team has some nice non-traditional offerings — tacos, burritos and the like — and a daily special, which that day was chopped brisket covered with melted pimiento cheese on a brioche bun. 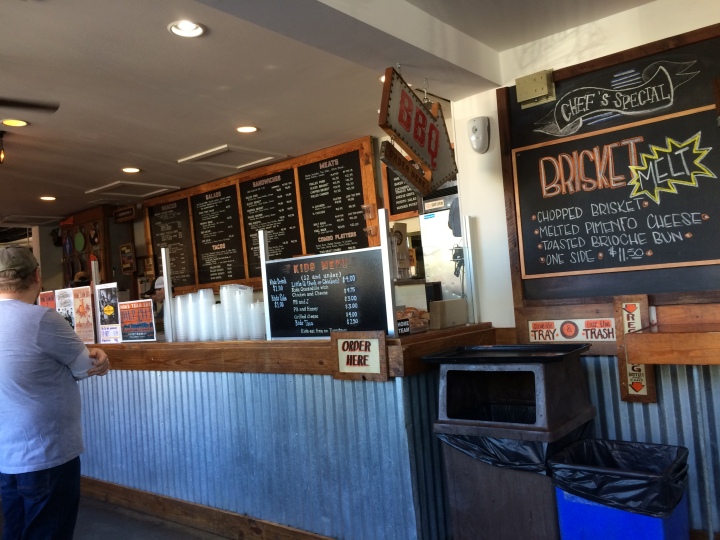 I got pork with collards and hash and rice.  The pork was not just good.  It was very good.  It was pulled and chopped into longish strands, as you can see.  What you can’t see is the smoke flavor and the quality of the bits of bark.  The meat was tender and moist.  Very good.  And the onions were a nice touch — sweet and mild.  The house pickles were, like most house pickles, lacking in the vinegar you want with barbecue.

They have several sauces, but the meat really didn’t need any sauce.  It was good as is. They have a vinegar sauce that lacks authority; a mustard sauce with a yellow, ballpark taste; a sweet red sauce I didn’t try; a hot red sauce that was too sweet; and HT Hot sauce which was just hot rather than flavorful.  For my money, none of them enhanced the meat, but your views may differ.  There’s one for every taste but mine.  But the pork was certainly to my taste, and I was happy without any sauce.

The collard greens were a disappointment.  They had not been chopped sufficiently, and so were inconvenient to eat.  And they were flavored by pulled pork rather than side meat, and had been made with the dread sugar.  People: greens don’t want sugar.  They want side meat and time.

I believe in eating local specialties, and I ordered the hash and rice in hopes of finding some hash and rice that I really like.  I may give up.  I should have ordered cole slaw or macaroni and cheese or potato salad or fries.  There are a lot of options at Home Team.  Actually, I should have just added some hot sauce to the hash rather than whining.  Maybe I should keep trying.

Nancy did not.  She got the smoked chicken chili and a salad. 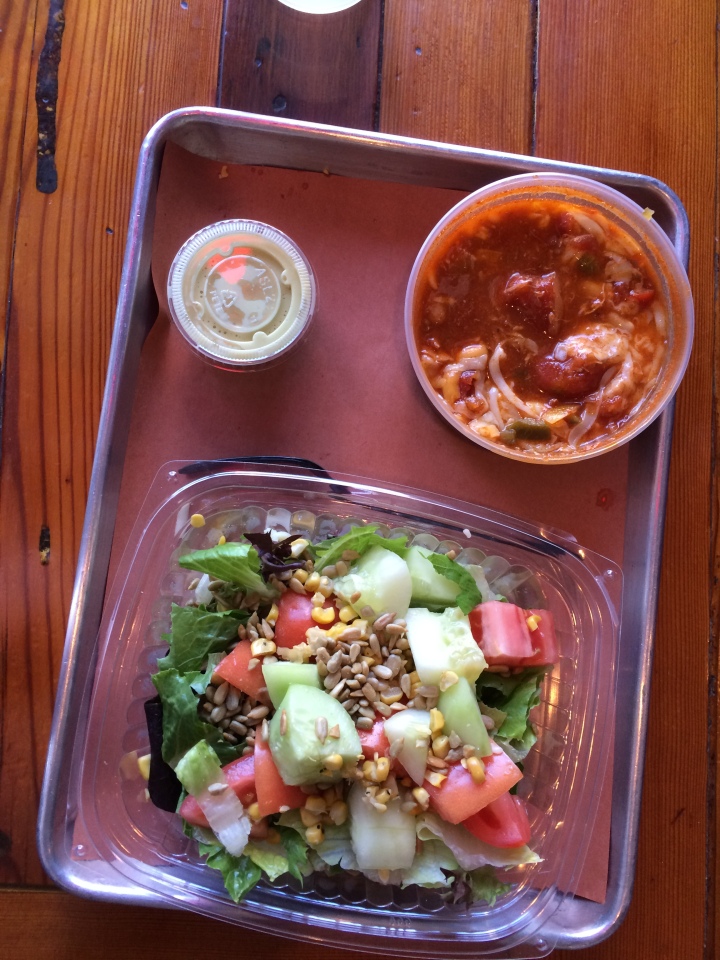 The chili was good, flavorful chili.  It was well spiced, but you could still taste the smoked chicken, not just the chili spices.  And Nancy pronounced the salad the best she had ever eaten in a barbecue place.  That may sound like damning with faint praise, but Nancy eats a lot of salads in barbecue places.  And this one was good on its own terms, with fresh ingredients.  Notice the roasted corn and sunflower seeds.  The dressing was a poblano vinaigrette, which was very tasty but not hot.

Like most places,Home Team has a minus or two, but it has a lot of pluses, chief of which is good, wood-cooked pork, and that’s all you need.   There are a lot of great places to eat in Charleston these days.  Home Team is good and will be much easier on the wallet than most of the others.  Give it a try.

*I do approve of Bloody Marys on occasion and I approve of rum drinks, but only when consumed in the Caribbean.  I also approve of adding ice to bourbon.