Don’t you just love it when something really good gets even better?  It doesn’t happen that often here in Washington, but when it does …. it’s a pearl of great price.

That’s what happened in our little corner of DC.  I wrote about the cookout my next door neighbors at Stately Hammons Hall, Scott and Julie Hammons and AJ Guy, had last year.  It featured pork butts and firehouse chicken — the chicken volunteer fire departments cook over makeshift grills to raise money — and it really added a lot to the neighborhood.  People started paying top dollar for houses on our block.

This year was even better.  AJ added ribs to his repertoire, Scott has been working on his white sauce recipe for the chicken, and Julie kicked the sides up a definite notch.

First, of course, the pork butts —

A thing of beauty is joy forever. 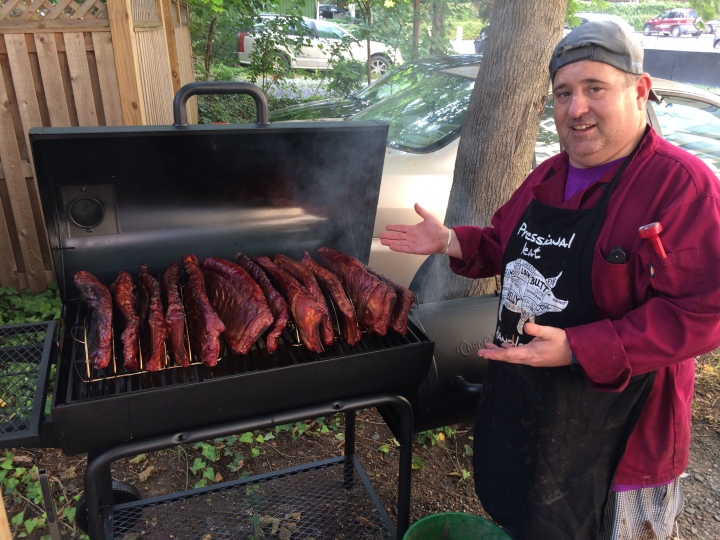 Now, regular readers will note that I am not a fan of box smokers.  They never seem to give the meat enough smoke flavor (but see Pendergast‘s Brandon Woodruff), in large part because most people treat them like crock pots: put the meat in, throw in some wood chips or (shudder) pellets, and then go off and do something else.  That actually works with smoking turkeys.  (I used to have a barrel smoker and smoked a few turkeys.  The problem was that I ended up with a lot more smoked turkey than I wanted.)   But it does not work with pork” no smoke flavor and mushy bark.

But AJ isn’t most people.  He set a demanding schedule for himself (and for Scott, who had to take a shift):

That’s a lot of hours, and they kept feeding wood chips into the smoker the whole time.  The result was some great smoke flavor.

Scott’s firehouse chicken, which was very good last year, was a triumph this year.  This is grilled chicken marinated in a  white sauce, much like the white sauce used in Alabama.  Scott has worked on his sauce recipe, and has come up with a great white sauce.  With the skilled grilling, the chicken was truly exceptional.  I can’t remember a time when I ate more chicken than barbecue.  I may never again.  I think Scott may have perfected the white sauce marinade.

You have to serve extraordinary chicken if you’re going to wear a shirt like that.  The chicken was so good that Scott could have worn, well, anything.

I didn’t get pictures of the sides.  I started off, as is my won’t, with a rib, then some pork, and then some chicken.  By the time I turned to the sides my hands were beyond the power of mere napkins to clean, so no pictures and I didn’t take notes.   Julie’s orzo salad stands out in my memory, in part because you don’t get a lot of orzo salads at barbecue places, and in much greater part because it was so good.  Really good.  There also were smoked baked beans, which were a big hit with the crowd (I’m not such a fan of baked beans that I devote stomach space to them in this sort of situation), and some quite good slaw   I remember Nancy being riveted to the sides to the extent that I’m not sure she had any meat at all.

All in all, a great event, and better than last year.  I foresee another spike in real estate prices.  Nancy and I will never sell, so for me, that just means a higher tax assessment, but it’s a small price to pay for good food and good neighbors.