I have written about Miss Myra’s twice before, here and here.  The first visit was a wonderful experience on many levels.  On the second I caught them on a very bad day — basically with no pit guy on a Game Day, of all the good days of the year.  But when you fall off a horse, you have to get right back on it, and I jumped at the chance to go to Miss Myra’s with Frank Lankford.

Frank and I were high school classmates at Indian Springs School.  At the time, it was a boarding and day school for about 160 boys, grades 9-12.  The school was and is about 20 miles outside Birmingham, in what was then the middle of nowhere.   The nearest commerce was a gas station and a funeral home about a mile away.  The campus included a spring-fed lake and 740 acres adjacent to the 9,000-odd acres of Oak Mountain State Park.  Most important, it included Dr. Louis Armstrong as headmaster.

Doc created a magical environment — the most intellectual environment in which I have ever been, and one in which the boys had a very real consultative role in school policy.   Boys were required to wear pants and shirts, but that’s it; although we usually wore shoes.  Doc’s goal was to make us think critically about philosophical and ethical issues, so that we could “move from the shallows to the depths” in personal and intellectual terms, and make a positive impact upon society.  I was not immediately responsive to Doc’s efforts, to put it as gently as possible, but I think of Doc often, and I have kept trying to move to the depths.  Being a lawyer and living in Washington don’t help, but i do feel that by now I’ve made it in up to my knees.  Others may disagree.

Frank and I reconnected at our 50th reunion.  In high school, Frank was universally liked — a really good guy.  After graduation he became a successful lawyer.  Despite that, he’s still among the most friendly and relaxed people I know.  Frank has a good nature.

And Frank really likes ribs.  He likes to eat ribs, talk about ribs, and cooks ribs.  I’ve never had Frank’s ribs but I’m eager for a chance to try them.  I just need to be (1) in Birmingham (2) on a weekend (3) free from football and (4) family commitments (5) when he is free to cook up a batch: the stars need to be aligned.  Failing all that, I leapt at Frank’s suggestion that we go to Miss Myra’s.

Frank had a classic order:  a half rack of ribs and a bag of Golden Flake potato chips. That’s focus. 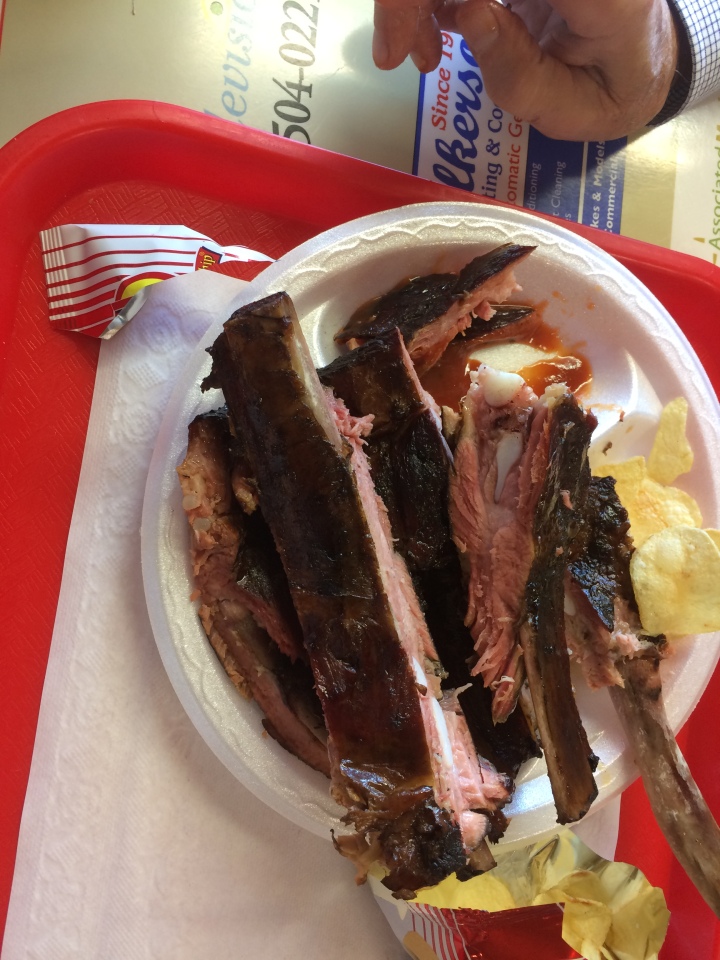 I had a chicken and ribs plate with greens and green beans. 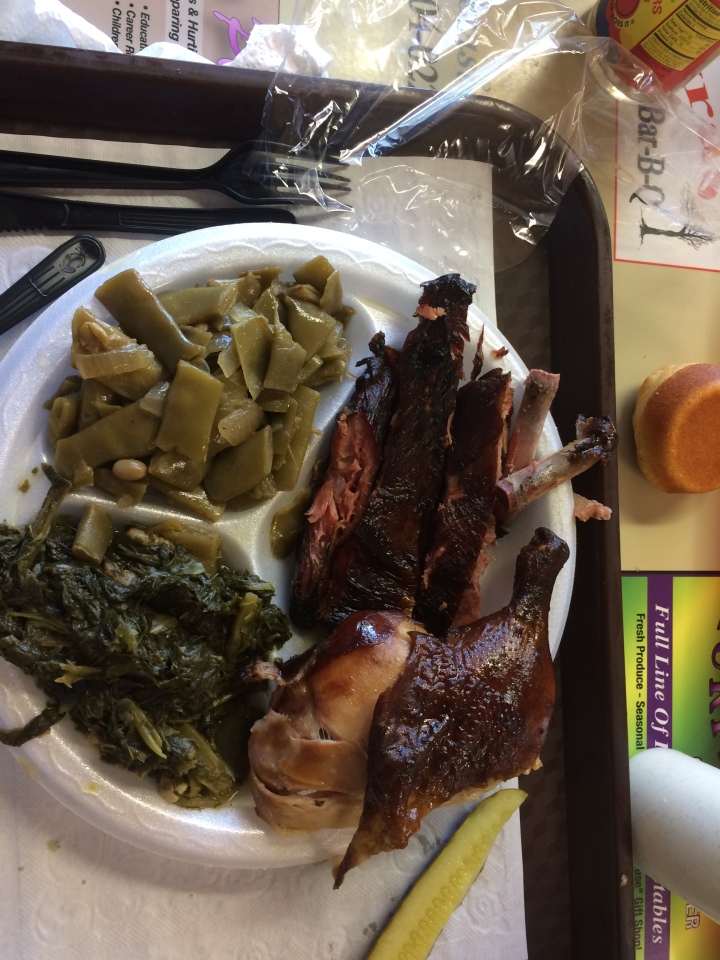 I specified dark meat, of course.  White meat costs more, lacks flavor, and too often is dried out.

The ribs were delicious, actually within shouting distance of Archibald’s in quality:  tender, smoky, and with an excellent bark.  They were so good that I neglected my duty to sample the sauce.

The chicken was excellent.  Smoky and moist — I’m sure even the white meat would not have been dried out.  I remembered and had some of their very good white sauce, but this chicken doesn’t need sauce.

Oh, the beans and greens were very good.   Have I written about how much I like green beans cooked properly (with pork for longer than you think.) The corn muffin — ah, who cares about the corn muffin?  It was not cooked on cast iron greased with bacon fat, but it was  okay, an entirely adequate vehicle for the pot likker.

Frank really enjoyed his ribs, which he ate with that rare grace you need to keep from ruining your shirt.  He didn’t even roll up his sleeves.  Respect. 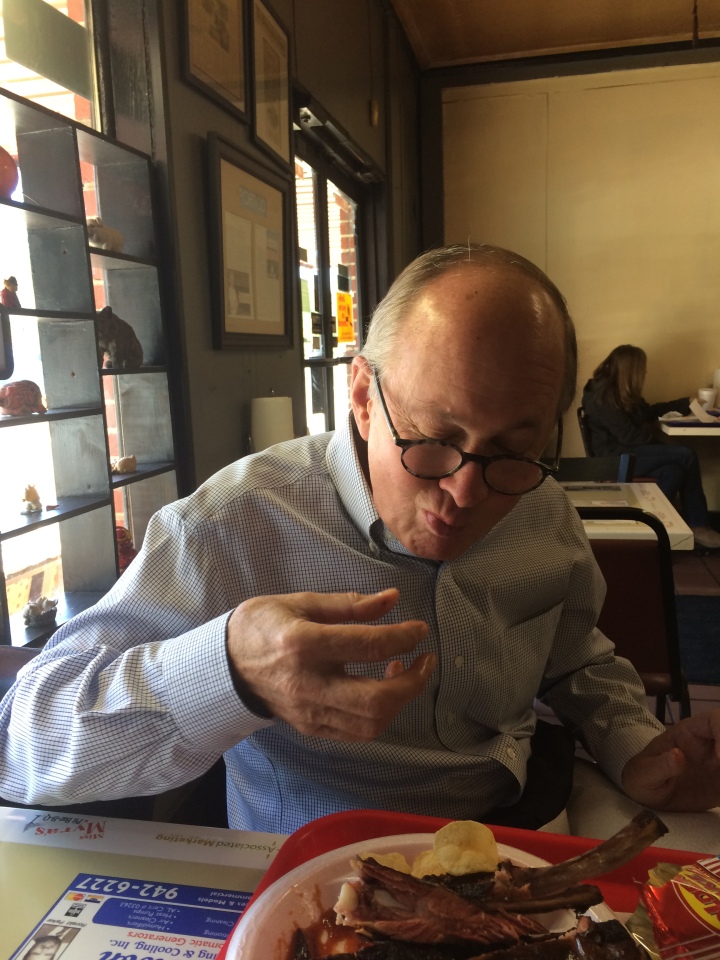 And that was a lot of ribs — a generous half rack of very meaty ribs.  Since Frank lives in Barbecue Country and can have ribs every day if he likes, and, I suppose, because he is able to exercise moderation, he didn’t finish his, but took some home for later.  I, on the other hand, savored every bit of my meal.

You really should go to Miss Myra’s if you are anywhere near Birmingham.  I can’t wait to go back.