Paul Horwitz, the First Amendment/Ribs Maven, is a big fan of Archibald and Woodrow’s.  I think he once may have suggested it in preference to Archibald’s.   Really.  On our last trip to Tuscaloosa, Nancy and I went to the Greensboro Road Archibald and Woodrow’s for dinner with our good friends, Bob and Babs McCurley.   None of us had been there before, but it looked good on the outside,

and there were the usual reassuring pictures of Bear Bryant inside.

The menu is much more extensive than the original Archibald’s, where you can get ribs, pork, white bread, and recently, chicken, and a few sides —  cole slaw, baked beans, and banana pudding (which in Tuscaloosa is a side rather than a dessert). 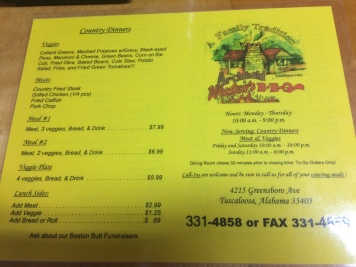 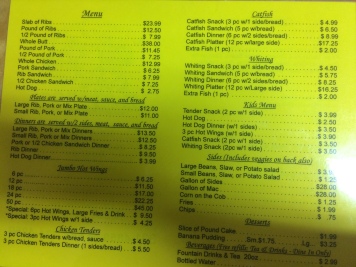 Archibald and Woodrow’s  has catfish and whiting and pork chops and country fried steak.  According to a poster on the wall, they have entertainment on Thursdays at the McFarland location.  (The poster shows a more vigorous public display of affection than is entirely appropriate for a family blog, so I will not show it.  I will mention that the poster details some really appealing prices ($3 for a pork sandwich!)  Personally, I try hard to avoid karaoke, and I believe that over-enthusiastic public displays of affection, like roving musicians, can distract from the food.  Focus is important.  I also tend to be wary of barbecue places with extensive menus.

But what’s really important is the food.  Nancy, Babs, and I each had the small-rib and pork dinner, while Bob had the chicken dinner with fried okra and pork and beans.  Babs had the greens and black-eyed peas, Nancy had cole slaw and mashed potatoes with gravy, and I had green beans and black-eyed peas.  And, of course, you get white bread.

First the pork.  It was delicious, very tasty with a tangy sauce — not hot, tangy.  The sauce

Bob was pleased with his chicken, which had a good smoky flavor, but our consensus was that the ribs were on the tough side, and, charitably, just okay by Tuscaloosa standards.   Here are Nancy and Babs.

“Just okay by Tuscaloosa standards” means the ribs would have been pretty good in most of the US, but they certainly are not in the same league as the original Archibald’s, or even Dreamland.  It demonstrates again that the hereditary principle is a snare, that the children and grandchildren of geniuses and heroes can be just average.  Or worse.  Actually, the only example of the hereditary principle holding true that comes to mind is that of the Stuart kings of England, all of whom were just awful.  (I know, I know: the prose of the King James Bible is unmatched in majesty, but it’s not like he did anything other than set up a committee to calm down some restless Puritans; and as far as that goes, it merely left the problem for his son.)

Getting back to the food, for the most part, the sides were excellent.  You might well go there for a vegetable plate at lunch.  Bob praised the fried okra and the pork and beans, which he said were clearly home-made.  Babs liked the greens and peas, and I really enjoyed the beans and peas.  Nancy reported that the slaw was a bit heavy on the mayonnaise, and that she didn’t like the gravy on the mashed potatoes.  (Nancy, having been raised in Connecticut, lacks the appreciation for vegetables cooked, uh, thoroughly with side meat, an appreciation with which Southerners are blessed.  So her success with side dishes is mixed.)

With the pork and the sides, Archibald and Woodrow’s definitely is worth a trip.    Paul Horwitz must have meant the one on McFarland when he touted the ribs, and I plan to eat there as soon as I can.  But not on a Thursday night.

One thought on “Archibald and Woodrow’s, Tuscaloosa, Alabama”