Martin’s isn’t a barbecue place.  It’s a meat and three and a really good one.  It’s hard to find a meat and three here in DC.  I went all the way across town to get my COVID vaccine, and despite sedulous internet research, I couldn’t find a single meat and three across the Anacostia River!   I was crushed.  And hungry.

For the culinarily untutored, a meat and three is a place where you can order a plate lunch with a meat and three vegetables, although the third item is often  — usually these days — cornbread or a roll, but always at a very reasonable price.  I usually get a vegetable plate.  I always choose the cornbread, which goes beautifully with the pot likker, and I sprinkle the vegetables with pepper vinegar to brighten the flavor a bit. 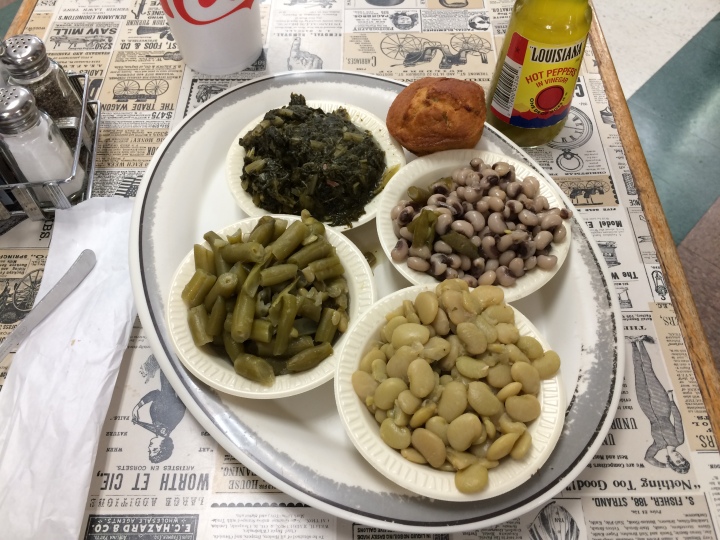 Delicious.  That, my friends, is one of the world’s great meals.

To really understand the meat and three, the first thing you should know is that the vegetables are not vegetarian: they include pork.  I worked on a case in Alabama with my friend Jeremy Schwartz, and he had a devil of a time avoiding pork and shellfish.  I remember him mentioning wistfully his hope that there were no shrimp in his hot and sour soup; and I didn’t have the heart to tell him that the John’s Restaurant cornbread, of which Jeremy ate seven pieces before our entrees arrived, tasted so good because of the bacon grease in the cast iron pan.

The pork in Southern vegetables can be bacon, side meat, ham, or, in the case of turnip greens or kale, a ham hock.  In truth, not all Southern vegetables are cooked with pork.  They also can be fried, preferably in corn meal, and they can be in casseroles without pork but with cream, butter, and cheese.  Well, maybe some bacon.  Nancy grew up in Connecticut and doesn’t see the attraction of vegetables cooked for a long time, except for sweet potato casseroles.  I think she ate too many school cafeteria vegetables that were cooked a long time without pork, and not unreasonably developed a prejudice.  Before we moved to Tuscaloosa for a year and a half frolic, Nancy and I went on a several-day apartment-hunting trip and Nancy was actually surprised that bacon was an element in every single meal we had.  (To be honest, it wasn’t every meal.  There was no bacon in the Dreamland ribs.)

Those of us who grew up in the South dearly love to eat vegetables, for the reasons too aptly demonstrated in the video here.   Part of the reason, of course, is our expansive definition of vegetables.  Mashed potatoes and gravy is a vegetable.   Macaroni and cheese and hushpuppies are vegetables.  I remember that the Fifteenth Street Diner in Tuscaloosa, since destroyed by the tornado, I think, listed banana pudding as a vegetable.

When I was working for the Justice Department, I kept a list of good restaurants, mainly in rural areas of the Deep South.  It was divided into two sections, Barbecue and Other.  The Other restaurants were mainly meat and three places.  If it’s called the City Cafe and is on or near the town square, or if it’s called The Farmer’s Market, it will be good.  Actually, they’re usually good, if you know how to order.  The greens and beans are almost always good.  The mashed potatoes often are not.  Casseroles are a sure bet, especially sweet potato and squash casseroles.  Chicken, fried or baked, and Salisbury steak are safe.  If you order thoughtlessly, don’t blame me.  I was shocked when a then-supervisor, Paul Hancock, ordered sliced (predictably canned, since it wasn’t listed as country) ham, mashed potatoes without gravy, and a salad (iceberg, duh) at a place in Selma.   I tried to tell him that he was making a huge mistake, but he wouldn’t listen.  I just shook my head as I plowed though my delicious fried green tomatoes, green beans, mustard greens, and black-eyed peas.  That was 40 years ago, and I still shake my head as I write.   Such a wasted opportunity.

Bear Bryant had a lovely story about eating at a meat and three in his first year at Alabama.

If you’re in Montgomery, be sure to go to Martin’s.  The food there is great, and the people are as sweet as can be.  And there’s a nice wine store connected to Martin’s.  It’s in a pricey part of town, but everyone eats there.  Like old school barbecue places, meat and threes bring people of all income, interests, and races together.  They unite us.  There aren’t enough places like that these days.