I wrote about Bum’s a while back, based on comments by my nephew, Jimbo Tanner, who was there with son, Jack “The New Much-Improved John Tanner” Tanner.  You can read that post for some background on the place.  They both liked it a lot, and both subsequently have volunteered that it’s now their favorite barbecue place.  Given the wealth of great barbecue places in Eastern North Carolina and their extensive exploration while on hunting trips, that’s saying something.  I needed to check it out, so I took an extra day on our trip to the beach to try it, and to revisit a couple of other places.

Jimbo and Jack were right, as usual.  Bum’s has the best barbecue in Eastern North Carolina — the best barbecue of that particular style in the world.*  Now, I want you to know that before making this pronouncement, I revisited a couple of other contenders for comparison purposes.  You can read about those visits in my next couple of posts.  The bottom line is, Bum’s is best.

Here’s the great man with a fan — 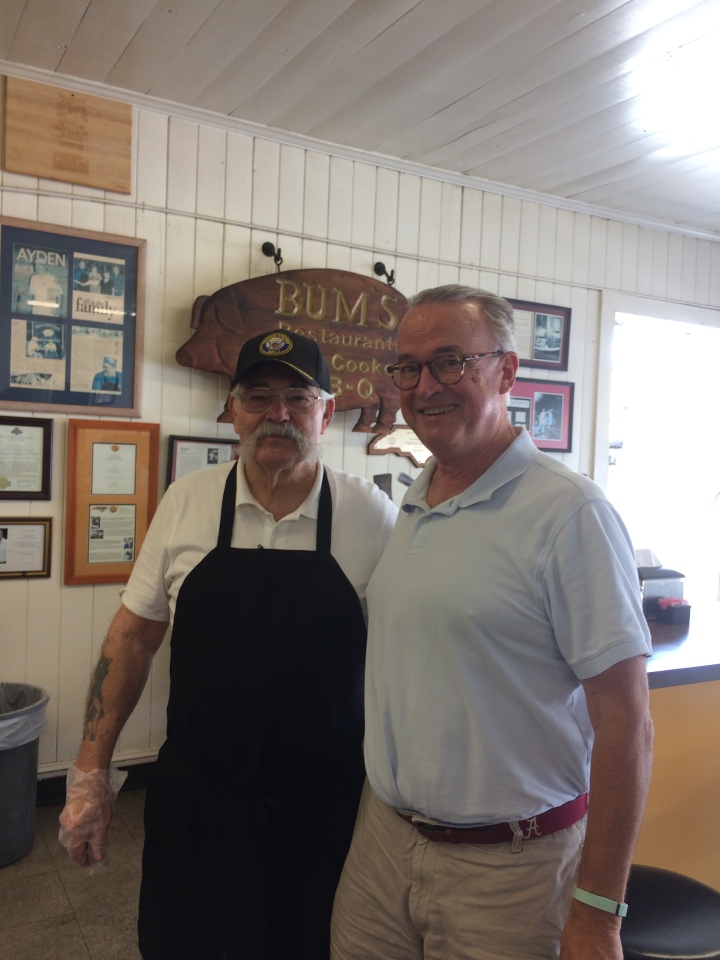 Bum’s is set in the heart of Ayden, a town of fewer than 5,000 people a short drive south of Greenville.

As is common in Eastern North Carolina, they cook whole hogs in a separate building out back.  As you can see, they cook with wood. 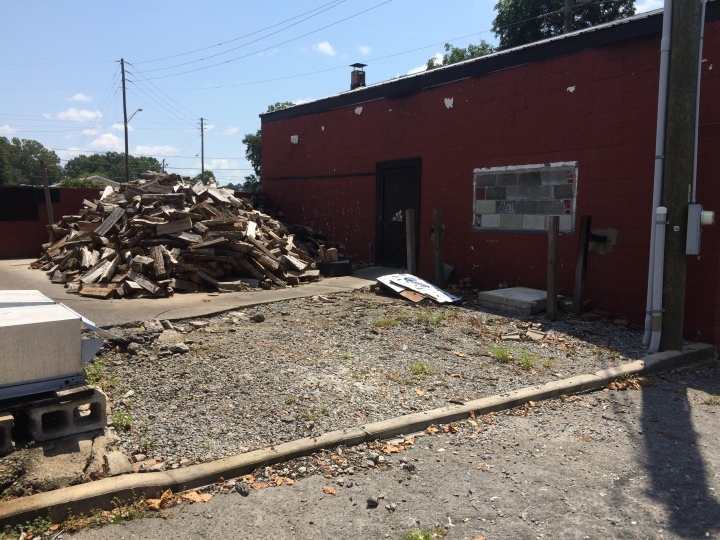 Inside, the dining area is good-sized and brightly lit by bare flourescent bulbs.  It’s a pleasant place, with nice photos and no pretensions.

You go to the counter and order, choosing among the foods on display, meat and three style.  Bum dishes up the food from trays on the counter.  Most of the food is in shallow pans, but the pork is in a deeper pan, and Bum keeps a dinner plate over the meat so that it doesn’t cool off or dry out between servings.

There’s a good choice of vegetables and a couple of other meats, such as salisbury steak.  I ordered a pork plate with greens and green beans. 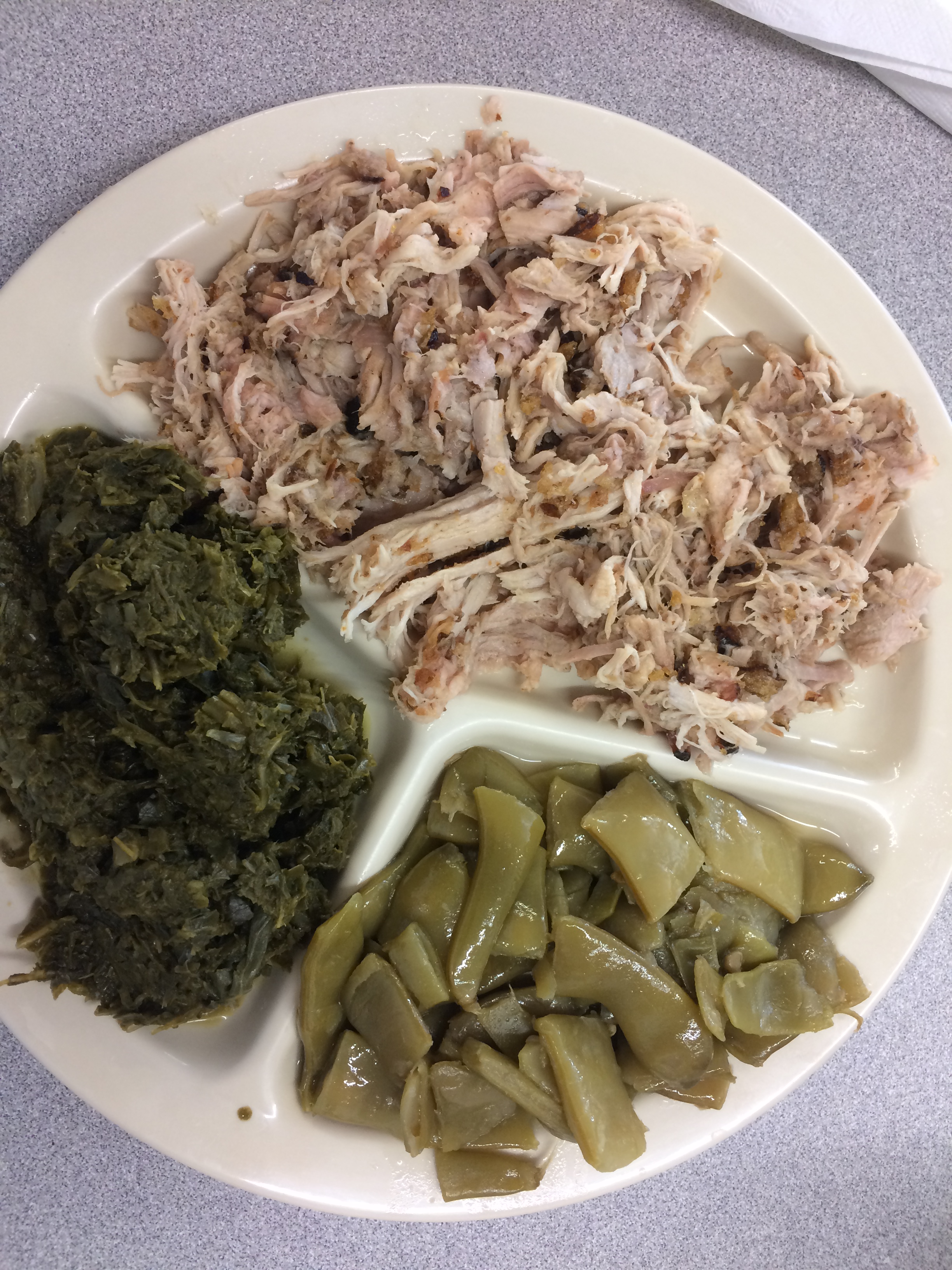 You can have corn sticks or cornbread — that dense cornbread you find in Pitt County.  I chose corn sticks and urged Nancy to get the corn bread.  She wasn’t going to eat it, but I wanted to try it for research purposes.

A couple of corn sticks are missing from that photo.  Nancy ordered the pork with cole slaw and potato salad. 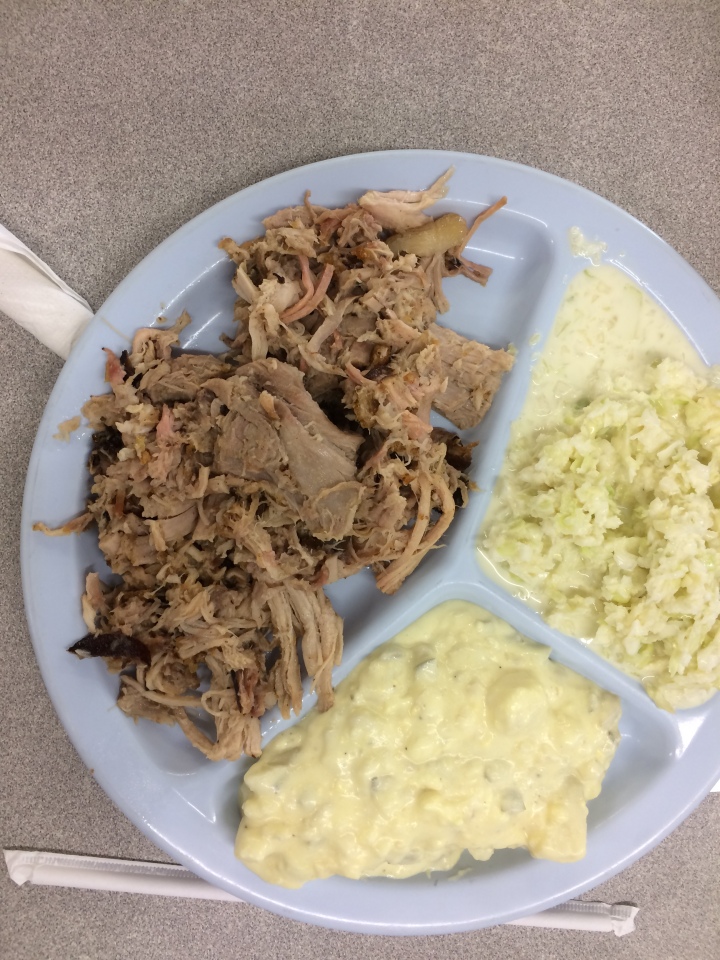 Bum’s pork is absolutely delicious.  It has excellent flavor, the best of pork and wood smoke, and it arrives warm, moist, and tender.  The meat is chopped roughly, by Eastern North Carolina standards, and is flecked with small bits of the skin, which add flavor and texture.  It was a joy to eat.

Bum’s has an excellent vinegar and pepper sauce, one right up there with Wilber’s and Parker’s.  But the pork was delicious without it.  I hardly used it at all, and might have forgotten about it had not Nancy mentioned how good it was.  I tried just enough to see what it was like.

The slaw was good, but the potato salad was overdressed, as you can see from the picture.  The green beans were great, however, especially with a couple of shakes of pepper vinegar (Texas Pete’s).

Let’s start a new paragraph for the greens.  Bum’s serves the essence of collard greens.   Bum’s uses yellow cabbage collards, an heirloom variety grown around Ayden, which styles itself the collard capital of the world.  They are chopped unusually fine, and most of the pot likker seems to have been squeezed out after cooking.  And there’s a special cooking process.  The greens are boiled in one pot until tender.  Bum’s puts fresh ham, tenderized ham, country ham, and various “sauces” into a pot and cooks it until  “everything gets just like butter.”  They then combine the two pots and grace North Carolina with collards of rare flavor and intensity.  I loved them, especially with some pepper vinegar.

The only problem is that they don’t leave you with any pot likker to speak of.  That gets us to the corn sticks (outstanding, one of the world’s great foods) and cornbread.  As I mentioned, the cornbread it very dense.  I did have some liquid from the green beans, but the dense cornbread doesn’t lend itself to dunking the cornbread in the liquid, what is known as the Huey Long method, the one I prefer.  You can, however, crumble Bum’s cornbread into the liquid — the FDR method — with very good results.

Let’s not forget the banana pudding.  It was really good.  It was served warm and had just a touch of cinnamon.  I only had one bite.  Nancy usually insists that I eat at least my full share of any dessert she orders.  Not this time.

It was a wonderful meal: the best of Eastern North Carolina pork, sensational vegetables, and wonderful corn sticks and corn bread.  And great banana pudding.  All for $9, with an apology that they have to charge that much and can’t take credit cards.

The only disconcerting thing was that, as I was taking notes on my iPhone, this kept popping up.

I didn’t take it personally, the statute of limitations having run on so many things, but I did feel better when I looked and saw that the police station was across the street.   I asked him, but Bum didn’t know the password.

I don’t care where you live.   Hop in a car, bus, train, or airplane and head to Bum’s Restaurant.   This is a great style of pork barbecue at its best.  And you don’t want to miss the greens.  Or the green beans.  Or the slaw.  Or the con sticks.  Or the corn bread.  And certainly not the banana pudding!

*Don’t start saying that Texas-style brisket or Memphis-style pork or whatever is better than Eastern North Carolina style barbecue.  That’s a pointless sort of argument that can never be resolved, the sort of thing Congress likes to spend its time on.  Do you really need to be told not to act like Congress?  Archibald’s has the best ribs in the world.  Conecuh Sausage is the best smoked sausage in the world.  We’ll get to other styles in due course.   I need another trip just to decide between Red Bridges and Lexington #1 for best in Western North Carolina, but there are also many places, and I have so little time.