Shortly after Nancy and I returned to DC from our trip to see Dear and eat barbecue, Doug Jacobson, the Kansas City Barbecue Maven, reminded me of our planned trip to Texas Jack’s, the Washington Post’s highly unreliable selection as the #1 barbecue place in the region.   Texas Jack’s is named after John B. Omohundro, a Virginia native who had a colorful career out West with the likes of Buffalo Bill and Wild Bill Hickok.  He adopted the name “Texas Jack” after the 500th person asked him how to spell Omohundro.

The restaurant has a welcoming exterior 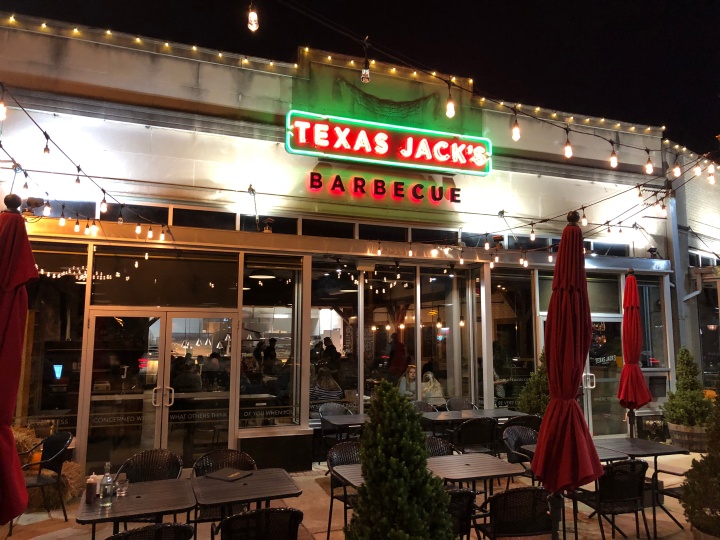 and a pleasant, wood plank interior.  There’s an open kitchen, in which you can see two very large Southern Pride smokers.  Not what I prefer to see (I love a brick pit for pork), but they swear that they cook only with red and white oak. 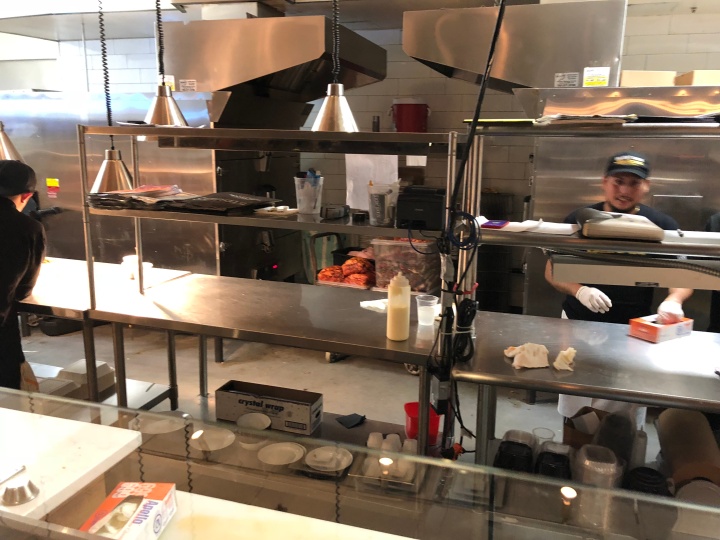 You can see some pork butts about to be loaded in, and a plastic container of brisket(?).

Texas Jack’s does a good business, and has recently expanded to the connecting space next door, and there’s now a large bar with a larger variety of bourbons and ryes.  Doug was tempted by a Smoked Rye Old Fashioned, which turned out to be rye with a twist — something seems to have been left out.  My favorite cocktail, Maker’s Mark on the rocks — actually one large rock here — was mixed to perfection and poured with a  generous hand.

We ordered a half pound of brisket, a half rack of ribs, and one sausage.  The meat came with home-made sweet pickles and pickled onions rather than the traditional hamburger dill chips, thinly sliced raw onions, pickled jalapeños.  Bad start.  We also ordered baked beans, cole slaw, and collards. 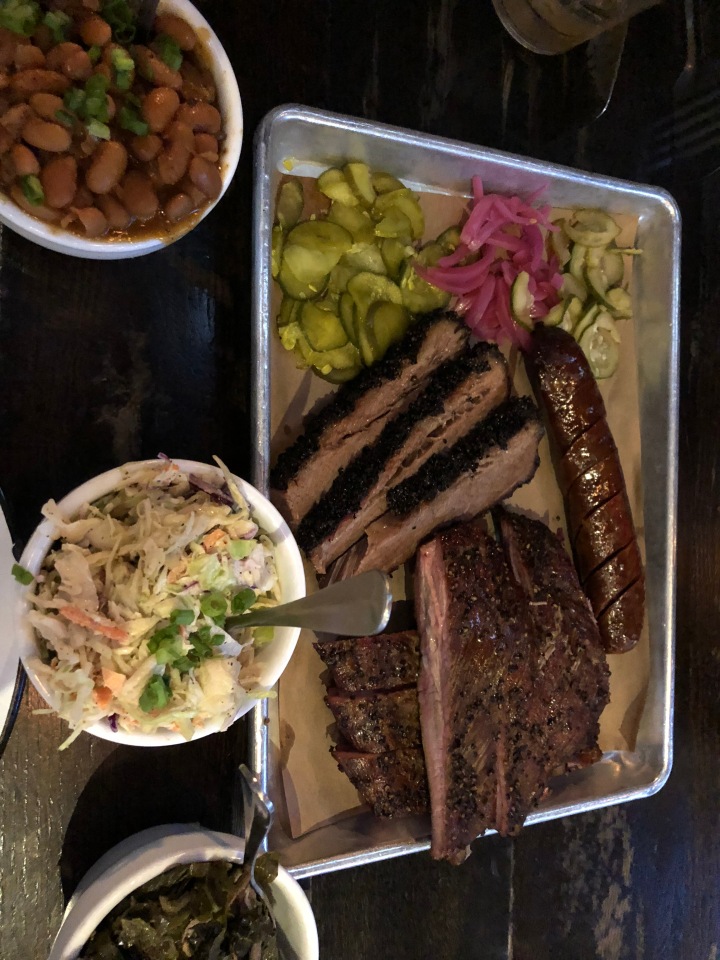 We were assured that the brisket included both lean and moist (fattier) meat.  Now, a brisket has a thick end and a thinner flat end.  If you order “moist” brisket in Texas, you will get meat from the thick end. 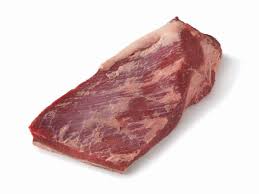 Other people, including the folks at Texas Jack’s, include only the flat end.  That is, all of the brisket is from the lean end. 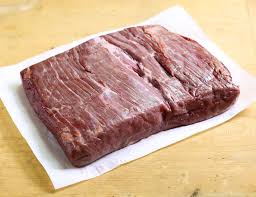 That means, apparently, that the “moist” meat at Texas Jack’s is the ribbon of meat next to a layer of fat on the top of the brisket.  It’s not shown in the photo immediately above, but you can see it clearly in the middle slice of brisket on the meat tray.  The use of a flat, i.e., lean brisket is a problem.  It is very, very hard to keep lean brisket from drying out during cooking.  The only ones in the DC area that I’ve ever seen do it is my cousin, Murray Johnston, and he only cooks for friends and family.  There are a fair number of people in Texas and Kansas City who can cook lean brisket that is moist.  Blaine Cooper at South Fork in Harrisonburg, Virginia, just a little over two hours from DC, produces moist lean brisket, as does Brandon Woodruff at Pendergast in Amsterdam.  But most people who cook brisket desiccate the lean end.

The brisket at Texas Jack’s is dry, alas.  It does have a real barbecue flavor (as opposed to the second-rate pot roast flavor at most DC area places), but it just isn’t moist. They have two barbecue sauces, original and spicy, that would help if they had less sugar and more pep.  That said, the brisket at Texas Jack’s, by actually achieving barbecue flavor, is well above average for the DC area.

The sausage, on the other hand was very good.  It was well spiced and not over-fatty.  (There is a happy medium.)  And the ribs were good.  They could have been just a touch more tender, but they had a good flavor.  Like the brisket, they had lots of barely ground black pepper on the crust.  In all, the ribs were as good as any in the DC area.

The sides at Texas Jack’s came in generous portions, but they were disappointing.  The  baked beans fell between the two stools of Boston baked beans and ranchero beans.  The slaw was actually under-dressed and was limp, as if it had been sitting around for several days and the dressing had sunk to the bottom along with the advertised green chilis and cilantro — listed on the menu but absent from the plate.  The greens actually had too much pork.  I know that’s an odd concept, but they were cooked with a whole lot of pork, I’m guessing leftovers from their smokers.  The pork was flavorless, as you would expect pork cooked in a Southern Pride smoker without hickory to be after it subsequently had been boiled.  I had to work around it to get to the greens themselves.  We should have gone with other sides.  You can get queso on your fries at Texas Jack’s..

We had some leftovers, and, the next day, Doug reported that he had added some Arthur Bryant’s sauce to them.  The meat and the beans were much better.  No surprise there.

Texas Jack’s is, as I said, well above average for the DC area.  If you go, bring your own barbecue sauce, or follow one of these incredibly simple, never fail recipes.