Nancy and I finished up a stay on Marco Island, dropped our guests at the airport in Fort Meyers, and headed east to stay a few days with Liza, Mike, and the lovely and talented Ella at the Marriott Oceana Palms on Singer Island.  That’s the barrier island just north of Palm Beach, which I like to call the poor section of Palm Beach.  We could have added some miles and saved some time by taking interstates, but I’m very much a surface highways kind of guy.  You see some of real-life America, and you get to stop at local, non-chain restaurants.

After about an hour, we hit LaBelle, and there on the side of the road was a log building with smoke coming out of the chimney and a line of cars at the drive-through — a city on the hill.

We pulled in and entered Log Cabin Bar B Que.  It’s a nice place.  It has a log interior decorated with striking accent notes.

I love that picture.

Log Cabin has a broad menu, centered on barbecue and seafood, but also with daily specials, such as meatloaf, prime rib, country pork chops, and the like — and the Mac Bowl, which appears to be a wide bowl of macaroni and cheese topped with more bacon than the law allows.  I’m glad it wasn’t a special when we stopped by.

Log Cabin is a busy place, with the wait staff rushing between tables in two rooms.  Despite the pace, our waitress could not have been friendlier — a face wreathes with smiles and exuding good cheer.  We sat down, ordered, and were offered a complimentary cup of turkey vegetable soup.  It was really good, with large chunks of turkey, corn, carrots, onions, and green beans, all of which seemed fresh.  Your grandmother made soup like that, if you were lucky.

I ordered a pork plate with black-eye was and macaroni and cheese.

The pork wasn’t particularly smoky — they use an offset cooker rather than a pit — but it was good with the well-seasoned smoky sauce.  I enjoyed it.  (They also have a sweet sauce, which I did not try.)  The macaroni and cheese was fine, and the black eye peas were sensational — absolutely delicious.  That’s was some good quality ham seasoning the peas.  They were the best black eye peas I’d had in a while.  Really good.

Nancy had the smoked chicken with cole slaw and a baked sweet potato.

She liked the slaw and potato, and I can verify that the chicken was well cooked, far above average.

There were two guys from Missouri at the table next to us.  Each had driven down Florida in his RV, and each brought a motorcycle.   They had driven for well over an hour from Fort Meyers Beach because they’d heard that Log Cabin was good.   My type of people.  They were sophisticated  diners– they noticed the lack of smoke flavor — and seemed pleased with their meals.  And they were really nice.  Everyone in the Log Cabin was nice.  It’s that sort of place.

Log Cabin closed the meal much as the way it started, with a complimentary dish of ice cream 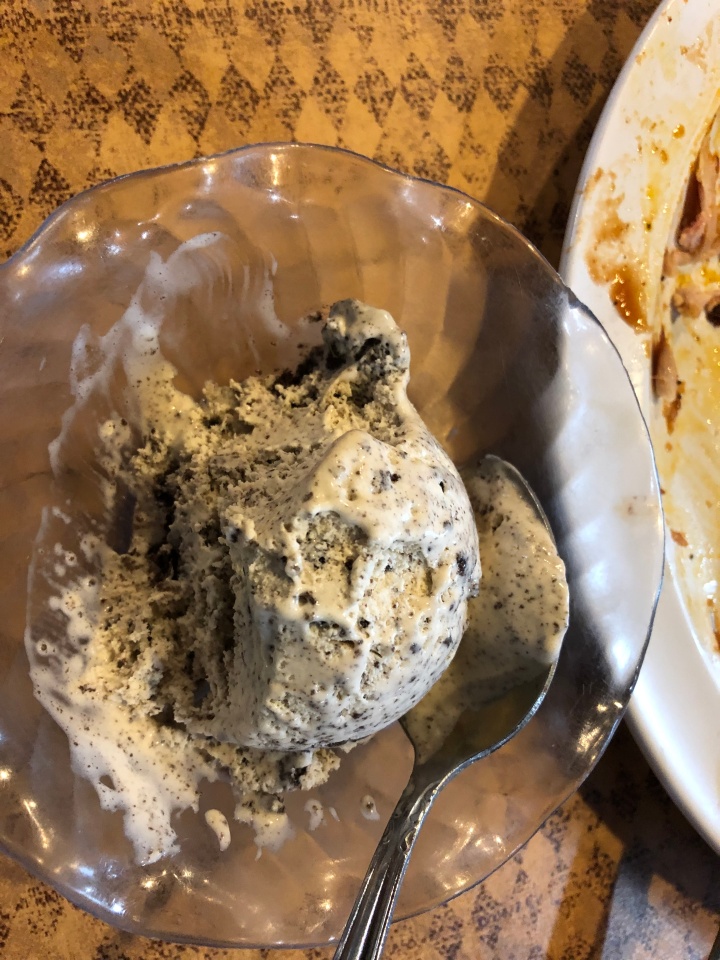 The Log Cabin is a delight.  It may not be the best barbecue in the world, but it’s sure better than anything in Washington.  And it’s just a nice place.  The service could hardly have been better, and it was a lovely atmosphere.  I felt really good when I left.  You should go there if you’re within a hundred miles, if only for the black eye peas — and the warm feeling the Log Cabin gives you

One thought on “Log Cabin Bar B Que, LaBelle, Florida”