Scott’s Bar-B-Que is the stuff of legend.  I first heard about it, oh, over 40 years ago, but never went because it really takes a special trip to get there.  The 426 residents of Hemingway live well off the road to anywhere else, and there was never much reason for anyone to go there except to go back home after they’d left.  That changed in 1972 when Ella and Roosevelt Scott opened Scott’s Bar-B-Que and started cooking whole hogs.  You can read more background here and here.  Word of Scott’s filtered up to the New York Times by 2009, and thence to the likes of Anthony Bourdain and Andrew Zimmern, and ultimately even the James Beard Foundation.  It’s a plain building, but the food has made it a Certified South Carolina Heritage Site.  Southern Living picked it as the single best barbecue place in the South in 2018.  Ella and Roosevelt’s son, Rodney, ran the place for years, and all the attention has prompted him to open a place in Charleston — stay tuned for a review — and to make plans for one in Birmingham.

I took a trip to South Carolina to eat barbecue for a few days after Thanksgiving, and Scott’s was my first stop.  I had a pork plate with cole slaw and potato  salad.

The pork was delicious.  First rate.  You could taste the smoke (Scott’s cooks exclusively with wood), and it was dressed with a good pepper and vinegar sauce that had a nice bite.  I devoured it, even though I’d had a big breakfast (four strips of bacon, two fried eggs, home fries, toast, and an alarmingly large side of cheese grits) just 2 1/2 hours before going to Scott’s, and I really wasn’t hungry.  But once I had a taste of that pork I didn’t even slow down.  I ate every bite and wiped the tray with the white bread.  The sides were overdressed to my taste, and couldn’t match the pork, but that would be a tall order.  I’d love to see them offer greens and green beans, but then I’m not the one who would have to make them.

Scott’s is a very nice place.  I don’t mean nice in the white tablecloth sense, I mean nice in a comfortable, warm sense.  It’s a good place to be.  There are only a few tables, and much of the room is taken up with some groceries.  They sell things like Vienna sausage, pork and beans, Prairie Best smoked sausage, sardines, white bread, and lots of snacks.  They have local produce out front.

The walls are adorned with more awards than you can count, including a Campaign for Real Barbecue certificate.  And there is a small seating area in which folks can relax and chat with people coming in for carry out. 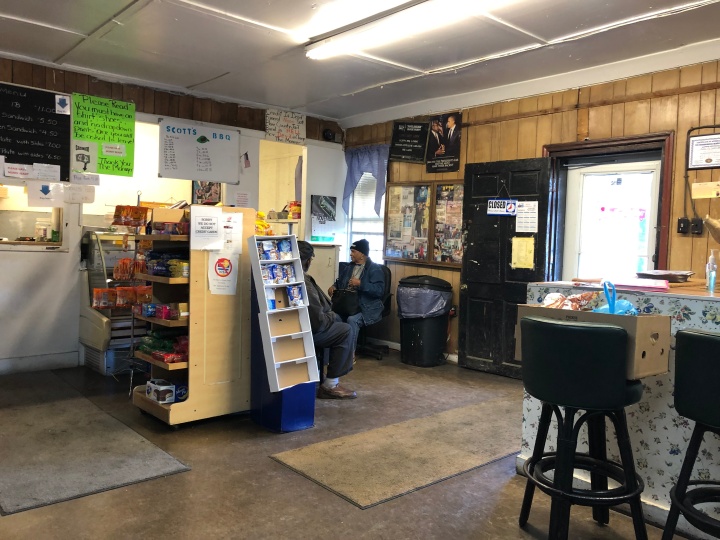 Scott’s is set off by itself, but it seems like the heart of a community.

You don’t have to get a plate.  Scott’s sells barbecue sandwiches and pork by the pound, and they’ll sell you a whole hog or a half hog, not to mention chicken, ribs, pig feet, and pork skins.

I overheard a staff member trying patiently to explain to a caller that there’s a set price for a half hog: they don’t price them by the pound.  Honestly, if you aren’t positive a half hog will be enough, buy a whole one.  It will be cheaper than a half hog at their regular per pound price (a mere $11), and I promise you, your guests will eat a lot more than you expect.  A lot more than they expect.

When you go to Scott’s — and you really should — you need to remember that you need to pay in cash.  They don’t take plastic or checks, and they don’t give credit. 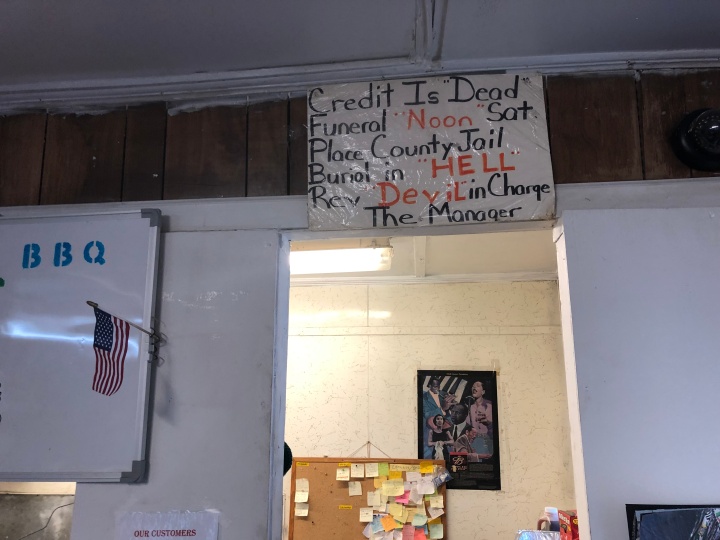 And for goodness sake, put on your darn shoes and a shirt, and pull up your pants.

If you can find Hemingway, you can find Scott’s.  It’s set right on the road, with not a whole lot around, and it has a big sign.

Again, go to Scott’s.  There used to be a lot of places like Scott’s around — not places that served barbecue that good, but good country barbecue places.  I cherish them.  Wherever you are, you owe it to yourself to go to Scott’s.  So go.