After eating at Pop Pop’s, I headed to Charleston to see the new place that Rodney Scott has opened.  And there he is, Rodney Scott, the James Beard Foundation honoree. 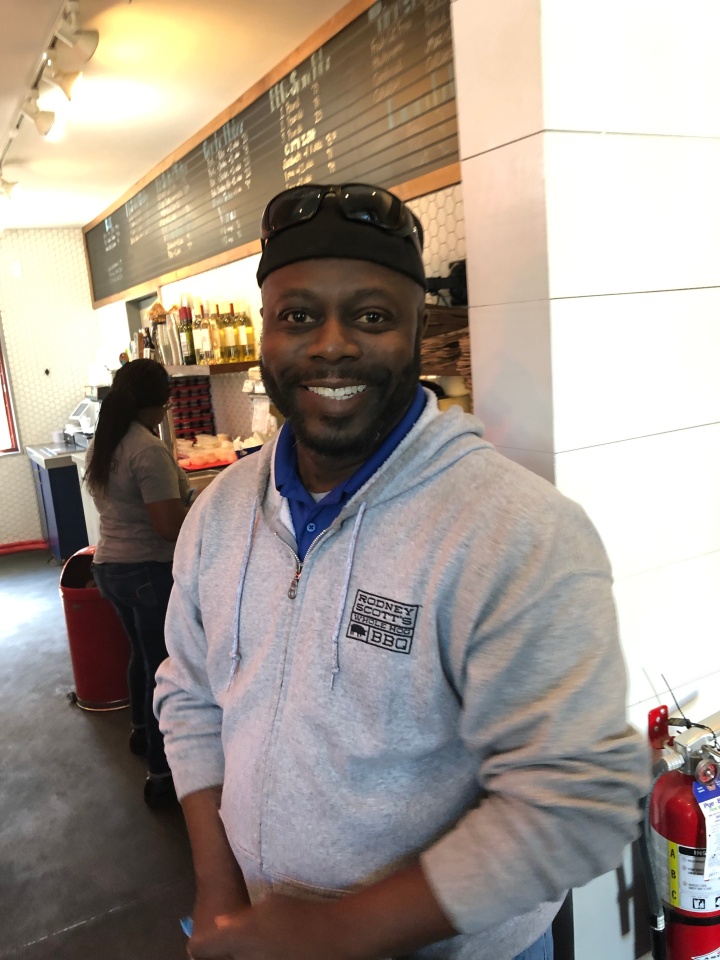 He’s a nice guy, very friendly, and also incredibly hard workings as per this Southern Foodways Alliance short film.  In 2018, Scott and Tootsie Tomanetz of Snow’s Barbecue in Lexington, Texas, became the first two barbecue people ever honored by the Beard Foundation.  (It was about darn time, but now that the Foundation has removed their blinders, they’re only a few score deserving pit masters behind.)  Rodney Scott has taken the family brand beyond the legendary Scott’s Bar-B-Que in Hemingway, South Carolina (population, 426), to a gentrifying area of Charleston.  It certainly will speed up gentrification.  Good barbecue places do that.

Rodney Scott’s is a nice, modern-looking place, with clean lines and a very minimalist interior for a barbecue place.  It has lots of light, with large windows on three sides.  That’s the smokehouse in back.  You order at the counter, next to a galvanized tub full of ice and cold beer, both national brands and local craft beers.

There’s a chalkboard menu, just as at Scott’s in Hemingway, and they cook whole hogs in a side building over wood and wood only, again as in Hemingway.  Like Scott’s, Rodney Scott’s is certified by the Campaign for Real Barbecue.  It’s a sizeable open space with numerous tables and stools with no backs for seating.  There is more seating outside, so Rodney Scott’s can accommodate a lot of people.

Otherwise the two places are worlds apart.  There are no groceries at Rodney Scott’s and no dedicated place with comfy chairs for neighbors to sit and socialize.   But like the Hemingway Scott’s, it has some really good barbecue.  I got a pork plate with potato salad and collards.

The pork has a light kiss of oak and a rich pork flavor.  The meat is pulled and chopped roughly, as you can see, and then lightly tossed with a vinegar and pepper sauce.   This is excellent barbecue.  If you want more sauce, you can choose between the Rodney Sauce, a vinegar-pepper sauce with some sweetness (a pinch of sugar and, I think, some lemon, which adds sweetness, too), and the Other Sauce, which is a sweet sauce with some vinegar and pepper. 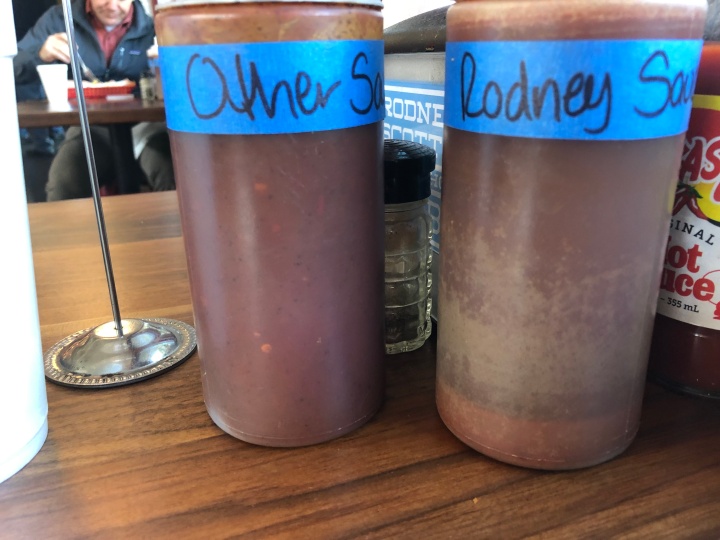 Both are thin sauces, and both are well seasoned.

The potato salad was very good.  It was made with some spring onions and, unlike the potato salad at Scott’s, was not at all overdressed.  The collards also were good, but just short of greatness.  I’m guessing that they used pork that already had been cooked to season the greens, and that accounts for the collards being a tad under-seasoned.  And another quibble — Rodney Scott’s doesn’t add bits of skin to the chopped meat as they do at Bum’s and the Skylight Inn.  I think that’s a mistake, but then I haven’t won a James Beard Award.  At Rodney Scott, the skin is fried and sold as pork rinds.  They looked pretty good, although not as good as the ethereal pork skins at Pop Pop’s.

Speaking of sides, Rodney Scott’s doesn’t follow some key South Carolina barbecue traditions.  You’ve already noticed the absence of mustard in their sauces, I’m sure.  They also don’t have hash over rice.  They do have hushpuppies, which, like cornbread and french fries, have to be a separate order.  And they have cole slaw and macaroni and cheese.  They also have banana pudding  but don’t list it as a side as is normal in the South.  Being in a gentrified area, they have some salads and chicken and turkey, and you can get a fried catfish fillet, coated in corn meal as the Good Lord intended.  And they sell spare ribs, which I presume are cooked separately from the whole hogs.  Basically, you can get anything you want at Rodney’s restaurant.   Pretty much.

Rodney Scott’s is doing a land office business, and with the high quality of food, it will continue to thrive.  They make really good whole hog barbecue, almost as good as the great Eastern North Carolina whole hog places.  You definitely should go there when you go to Charleston.  I will.  It’s a Top Place.