I have been to Big Water Seafood exactly once in my life, and that was enough to make me a big fan.  Great place, great food, wonderful people.  Here’s the story.

Nancy and I stayed on Siesta Key for a couple of days with our good friends Tom and Kit Moore before we headed to Marco Island, there to be joined by Liza and Ella.  To begin with, you should know that Siesta Key is mobbed during Spring Break.  Siesta Key has idyllic broad white beaches of powdery white sand, lovely sunsets, warm sun and gentle breezes, and a charming central retail Village. It also has about a gazillion condos filled with people from the frozen tundra of the Midwest, and huddle masses in adjacent Sarasota yearning to splash free.  All of those lovely features draw a lot more people than the island can easily handle, despite the heroic efforts of Siesta Key (including a free shuttle bus service to minimize parking problems).  We decided to go out on Night Two, after a lovely grouper dinner chez Moore on Night One, and, no machetes being available, we decided that rather than brave the throngs at one of the Village restaurants, we would try Big Water Seafood.

Big Water Seafood is a recent creation of Scott Dolan and Sebastien Martin, according to a clipping on the restaurant wall.  And it is not just a restaurant, but that wonderful combination of a retail seafood market and a restaurant.  You can be confident that the seafood is fresh. 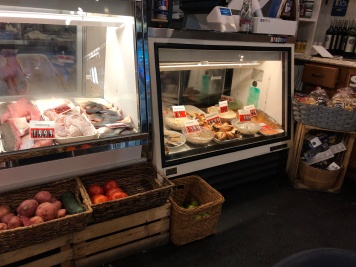 Scott and Sebastien also own the highly regarded Spearfish Grill, which we considered but skipped because of the lines.  It takes a lot for me to put up with long lines.  I was in the Army.

Now, Big Water Grill is small — only five tables and two picnic tables pushed together.  There’s also a space next door that they use for special small events.  When we got there, we were told that there would be an hour wait for a table, but that we could get a drink.  I figured that over an hour, I could get a couple of drinks, some solace for a long wait.

Then out spake brave Scott Dolan, Captain of the gate … .

Well, I’m trying here for something heroic and memorable, pace Thomas Babington.  More prosaically, Mr. Dolan announced that hors d’oeuvres were available in the party room next door for those of us who were waiting, gratis.  (That’s Latin for free.  I’m a recovering lawyer.)  How many times has that happened to you?  In all of human history?   We entered and beheld soup, a tossed salad, shrimp salad, Italian cold cuts, salmon and cucumber rolls, and French bread with cheeses. 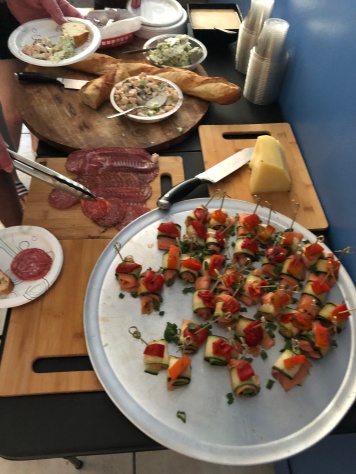 (The pictures are fuzzy because I was misty-eyed.)  Stunned, I staggered next door to get drinks for us.  As he handed me the drinks, Saint Dolan ignored my proffered credit card and told me just to tell the waitress how many drinks we’d had when we placed our dinner orders.  At the risk of repeating myself, how many times has that happened to you?  As a first-time customer?  Never?   Just as I thought.

After the promised hour wait, we were seated, confessed our earlier drinks, and ordered dinner.  Kit started with a fish stew that was overflowing with shrimp, mussels, and a  clam.  Here’s an aerial view.

The broth itself was thick with seafood and vegetables.  Kit kept mumbling, “Very good.  Very tasty.  Nicely spicy.” as she ate it.

Kit followed with a grouper sandwich without the bread.

She raved about it.

What you see, my friends, is local fish and some chips.   Look carefully, my friends.  You may never see that again.

Nancy and I both ordered the blackened grouper, no surprise there.  What was a surprise was that the grouper was actually blackened, a la Paul Prudhomme, seared in a very hot skillet rather than just dusted with spices.  Behold:

The grouper had an honest to goodness crust of caramelization mixed with those blackening spices.  I felt that I had been transported.   Even the steamed vegetables were good — not overcooked and well seasoned.  They were helped by the house-made pepper vinegar 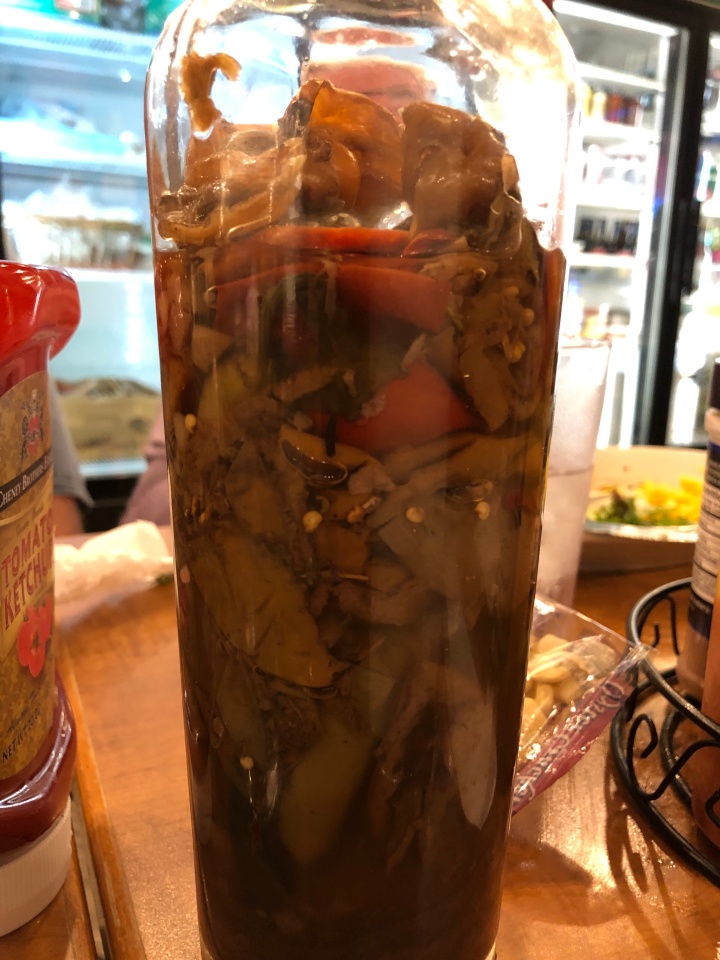 and by the house cocktail sauce, which actually included a proper amount of horseradish.  Is there anything they can’t do?

Oh, and I was so proud of my self-restraint among the hors d’louvres that I ordered some hush puppies.

They were (a) big and (b) tasty, with a nice remoulade-like sauce.  They weren’t quite up to the hush puppies at Red Bridges, say, but they were good, and just what the doctor ordered to complement a meal of fish and steamed vegetables.

Hurry on down to Big Water.  Be prepared to wait, and I don’t think you should expect free hors d’oeuvres, but that’s okay.  Sit back and relax.  The value in life is not in objects, but in family, friends, and experiences.  At Big Water, you have a great dinner with good people ahead of you.