I’ve mentioned my cousins, the Johnstons, before.  My first cousin, Ann Thomas, is one of the Wilson, North Carolina, Griffins, famous for their preference for Bill’s over Parker’s.  (Now that Bill’s has closed, they seem to be fans of Marty’s.)  Murray is from San Antonio  and went to school in Austin, and, a true Texan, he makes the best brisket in the Washington, DC, area.  Their son, Murray IV, also known as Cuatro, is the founder and first president of the Saint Anselm’s Abbey School Barbecue Club and, in his free time, is right up there with his father in making brisket.  Of course, as a Cadet at West Point, his free time is basically non-existent.  Griffin now joins the barbecue lists with a review of Texarbama.

Griffin graduates from Trinity School at Meadow View this year, and is off to Hillsdale College in the fall.   Griffin is a sweetheart.  She’s smart, pretty, charming, athletic, and a lot of fun — she introduced me to the Babylon Bee.  Griffin also is preternaturally thoughtful and wise beyond her years, which I guess she gets from the Griffin side of the family.  And now she’s displaying her barbecue chops.  Note that she graciously acknowledges the assistance of her parents.  As you will see, no one could keep track of all of that food without help. 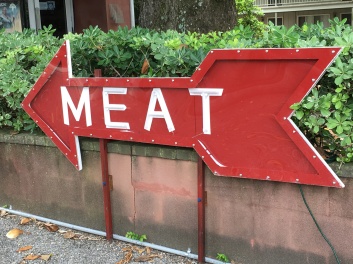 We arrived at Texarbama BBQ in Fairhope, AL, to a roped-off parking lot with picnic tables 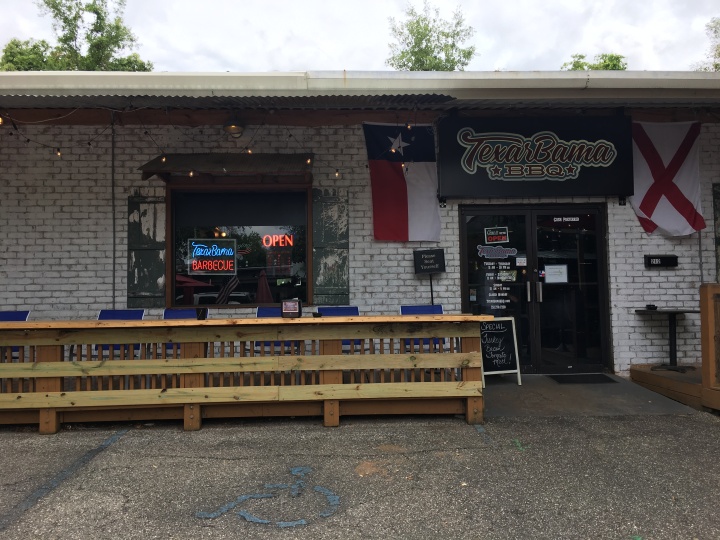 and a trailer that contained a smoker and had the Texas flag painted on it.

It was obvious they take great pride in the food that they provide. There was Jerry Jeff playing in the background.  We sat on the porch and were immediately offered a beer. We declined because even though it might be five o’clock somewhere, it was only 2:45 in Fairhope, AL.  Speaking of beer they had an option on the menu to buy a round of beer for those cooking in the kitchen.  We thought it was a great idea and bought a round for the kitchen.

Now on to the food.  We ordered three times to ensure that we tasted most items on the menu.  We still did not try the Turkey, which was our server’s favorite meat on the menu. For their meats we had their Brisket, Texarbama sausage, Pork Ribs, Pulled Pork, Jalapeño Cheddar sausage, and Chopped Beef.

The brisket was fatty with the perfect amount of burn on the outside.  The Texarbama sausage was a good Texas sausage. The Pork Ribs were tender, juicy, and easily came off the bone.  The Pulled Pork was sweet and tender.  The Jalapeño Cheddar sausage was juicer than the Texarbama and was greatly enjoyed by Murray.  Lastly, the chopped beef, which came sauced, was described by Murray as a better version of a sloppy joe.

Their sides were also phenomenal.  Our favorite side was their Texican Corn.  It was like a Mexican street corn, but off the cob.  It was sweet with plenty of butter and Cotija cheese.  The collards were good traditional collards.  Their Honey Jalapeño Lime Slaw felt incomplete.  It was light, but was missing something as it neither had a vinegar or mayo base.  Lastly, their beans were just as Texan beans are supposed to be: they were savory, firm, and properly seasoned.

By the time we had finished the meats and sides and Griffin had tried some of their Texan sodas, 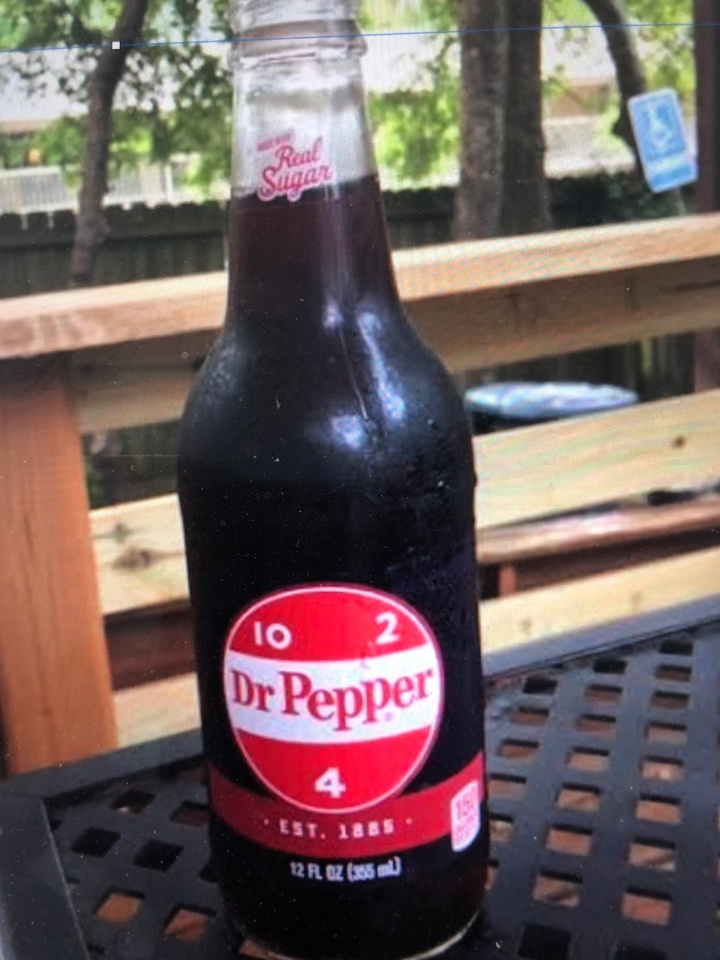 we could not eat another bite, but promised we would come back for dessert.

We returned three hours later for their Chocolate Pecan Pie and Banana Pudding.  Both of the desserts were very good.  Their Chocolate Pecan Pie was not what Nana (Selma Griffin) would call a Pecan Pie, but rather a Chocolate Chess Pie with some Pecans thrown in.  It was a great pie as long as we don’t get hung up on semantics.  Finally, the Banana Pudding, Griffin’s all time favorite dessert.  It was, as the our server made a point of telling us, not banana flavored pudding, but vanilla pudding with bananas in it.  Fabulous.

We recommend Texarbama and Fairhope in general.  Y’all should visit sometime!

A couple of notes.  Fairhope is one of the nicest towns in the USA.  It was founded by some Henry George enthusiasts, and, blessed with a situation on the eastern shore of Mobile Bay, has long attracted writers and artists.  It’s a great place for walking, shopping, and eating, not necessarily in that order.  Stay at the Grand Hotel, and enjoy the live oak-shaded walk along the bay beside lovely old homes.  It really is worth a trip.

And note the genius of Ann Thomas and Murray in taking their daughter to Fairhope for her senior year Spring Break.  When Liza was a senior, she lobbied to go to Cancun or Acapulco with her friends.  Never let a high school senior go to a beach with friends.  We ended up outbidding her friends by taking Liza to Italy.