Regular readers of the Blog are familiar with my mother, Dear. 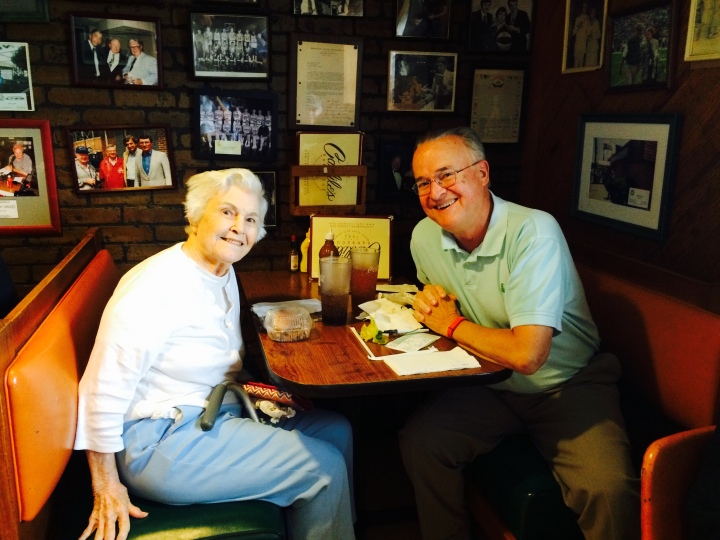 She has appeared in numerous restaurant reviews, such as Carlile’s and Demetri’s, and in numerous discussions of fried chicken and other foods.  Her recipe for dressing for turkey is unparalleled, and one day I’ll post her recipe for pound cake.  On December 7, 2018, Dear died after 94 remarkable years on earth.

Dear was born July 15, 1924, in Macon, GA, to Walter Ewing and Selma Shadburn Griffin, and christened Betty Sinclair Griffin. The family soon moved to Manchester, GA, where her father was employed by the YMCA.

The time in Manchester made a deep impression on Dear.  Extended family members, out of work during the Depression, lived with her family off and on.  She often saw Governor and later President Roosevelt stop by the local drug store for ice cream. Her father headed the Franklin D. Roosevelt Boy Scout troop, which marched in Roosevelt’s first inaugural parade.  Her father often would take game he had shot to the little White House.

The Depression years and a strong religious upbringing instilled in Dear a lifelong concern for the poor and for victims of racial and religious discrimination.  Dear spent her high school years in Vienna, GA, where she was valedictorian of her class, as well as “Miss Vienna”. 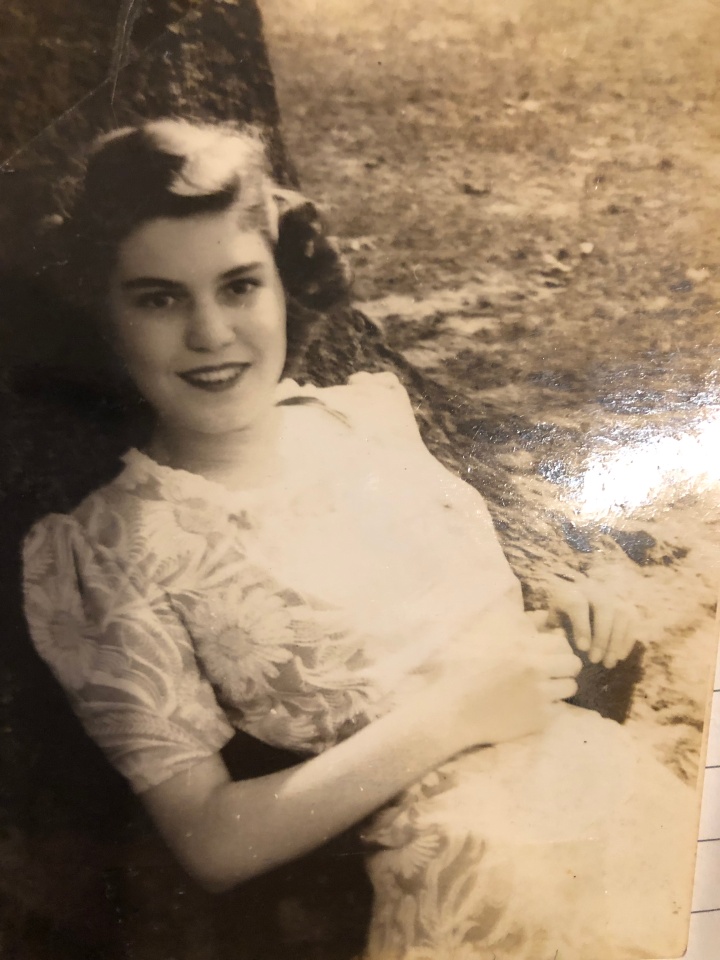 She and her father went to Atlanta to see FDR pull the switch for rural electrification in Georgia.  Dear attended LaGrange College and then the University of North Carolina at Chapel Hill.  Later, Eleanor Roosevelt (“in person, she was a lot more attractive than her photographs”) was commencement speaker at Dear’s graduation from Chapel Hill.

While in Chapel Hill, Dear met her future husband, James M. Tanner, and they were married in Vienna shortly before his US Marine Corps deployment during World War II.  Their first son, James, Jr., was born soon thereafter. After the end of the War, they returned to Chapel Hill to complete college.  They had two more sons, David and me, and after time in Takoma Park, Maryland: Columbia, South Carolina: and Granville, OH, they moved to Birmingham, AL, in 1959.

Dear’s life in Birmingham was dominated by the considerable challenge of raising three boys, in whom she was able to promote a strong sense of independence, healthy curiosity, and a love of reading.  We each independently developed a distinctively individual ability to be preternaturally difficult.  Dear was a steadfast civil rights advocate  and supported both the SCLC and SNCC, which also involved considerable challenges in Birmingham in the 1960s.

Dear joined and worked for a time at Canterbury Methodist Church, and later attended Cathedral Church of the Advent.  She also was an active member of the Jewish Community Center.  Throughout her life, Dear was a voracious reader and a weekly conqueror of the Sunday New York Times crossword puzzle.  She was also an extraordinary cook, with an uncanny ability to prepare foods of the South and of Europe with only the most casual reference to recipes.

After the nest emptied, Dear travelled extensively, with over fifty trips to Europe.  She loved the French language and culture, and in her forties, Dear took French classes at Middlebury College and even spent a summer working at a French vineyard.  Even into her nineties, she was involved with Alliance Francaise, and regularly met with friends at the JCC to learn more about the French culture and language.  She loved meeting people, and during her travels she built many chance encounters into real friendships.

And Dear was a handful.  At dinner with Nancy’s parents a couple of nights before our wedding, someone came around selling roses.  After dinner, Dear nonchalantly stepped out into the streets of Georgetown with a rose between her teeth.  Nancy and her parents may have been surprised.  I was not.

Dear was active politically — overactive at times, as when she voted in three different states in the 1960 general election, an increase over two states in 1956.  Go big or go home, that was Dear.

Dear was open to all sorts of people and made friends wherever she went.  People all over Italy invited her into their homes.  Wherever she was, Dear often broke the ice by asking people at other tables in restaurants what they had ordered.  She apologized in embarrassment once when she realized that she had asked this of the actor, Peter Sellers.  A few minutes later, he sent her a note that read, “This will ensure you safe passage throughout France.”  It was signed, “ Inspector Clouseau.”  Now, I live in DC, where most people just will not speak to a stranger, where saying “Hello” on an elevator alarms people.  Dear reached out to strangers.  Being with Dear was a way to meet people.  We were in a restaurant once and a woman at the next table was so taken by Dear that she asked to be invited to Dear’s next birthday party.

Debby and David gave a big party for Dear’s 90th birthday.  Debby sent out about 100 invitations;  about 10 people sent regrets and about 120 showed up.  And what a diverse crowd, ranging across every imaginable racial, religious, and income group.  Her mafia friends couldn’t make it, and we did decide not to invite Vladimir Putin, with whom she had walked up the Acropolis back in his KGB days, but it was quite a crowd.  It was at that party that I learned that Dear had been kicked out of the water aerobics class at the JCC once because she and others were sharing a bottle of champagne in the pool.

As with most of us, the advancing years resulted in … some erosion in her edit mechanism.  Eating lunch with   granddaughters-in-law Michelle and Sally when a pair of police officers walked in, Dear playfully shouted, “They’ve come to arrest me!”   It did call to mind a statement her brother, Tom, made upon the death of their mother:  “Well, she’ll never embarrass us again”,  but it was all in fun, and taken in good part by all.

But I was never embarrassed by Dear.  Well, I’m sure I was when I was 12 or 13, when the mere existence of parents can be an acute embarrassment, but that’s on me.  I confess that when it comes to being an embarrassment, I’m not one to throw stones.    But Dear could carry it off.  Dear treated every stranger as a potential friend.  Her experience in the Depression in rural Georgia, her contact with and deep admiration for Franklin and Eleanor Roosevelt, her deeply Christian roots, and her experience as an army wife, meeting people from all over the country and from all manner of ethnicities, helped her see people “as if they really were fellow passengers to the grave, and not another race of creatures bound on other journeys,” as Dickens wrote.

I owe a lot to Dear.  I owe the example of regular and wide-ranging reading as a life habit, one of the best if not the best of gifts a parent can give a child.   I owe such compassion as I have.  And I owe a lifetime of great meals and, most of all, love.

6 thoughts on “Dear: A Remembrance”