After our epic lunch at Le Laurencin, Nancy and I ventured south toward the confluence of the Rhône and Saône to see an exhibition of photographs by Steve McCurry at La Sucrière, a former Chamber of Commerce building in an industrial area, with a couple of watering hoes nearby.  You’ll remember McCurry’s haunting photograph of a young green-eyed girl in Afghanistan that graced the cover of National Geographic.  It was a stunning exhibition, and the walk back pounded off maybe ten percent of our lunch.

We headed to our cruise ship, unpacked, settled in a bit, and toured the ship before dinner.  (Note:  I plan to write up the food on board our Viking river cruise in a later post.)  The next morning started with a big breakfast, followed by a tour of Lyon.  The tour included a bus ride to the crown of Fourvière Hill (you can also take a funicular), the area of the original Roman settlement.  A large Roman amphitheater and other ruins remain on the hill.  At the very top is the Basilica of Notre Dame de Fourvière, which was built, unfortunately, in the late 19th century, as a celebration of the Prussians’ failure to burn Lyon.  Architecturally, the Basilica is a hodge-podge, with bits of every architectural style known up to that date.  It also boasts some lovely mosaics, most notably a large mosaic of the story of Joan of Arc.  The Basilica also offers a spectacular view of Lyon.

We also stopped to see some of the tromp l’oeil paintings celebrating the history and life of Lyon.

After an interesting perspective on the Old City, we were set free but solemnly ordered and required (they were serious) to go back to the ship for lunch and a mandatory fire drill.  Nancy and I considered the various definitions of “mandatory” and chose “precatory,” i.e., secondary to the need to delve more deeply into the bouchon tradition.  We can go to fire drills at home.  This time we went to the Rue Marroniers, a pleasant pedestrian street devoted exclusively to restaurants.  What a great city!

There are two certified bouchons on the Rue Marroniers.  Regular readers will not be surprised we chose Aux Trois Cochons.

Nancy ordered the sausage with pistachios.

It was a very good sausage, delightfully seasoned and with a good solid texture.  France is a good country for sausage, and this definitely was up to French standards.  It came with boiled potatoes and a cervelle de Canut, literally silk workers’ brains, a light white cheese common in Lyon.  Here it was a cheese spread with herbs and garlic.  As always in a bouchon, it was a lot of food, more than Nancy could eat.  I helped.

I ordered from the three-course Menu Lyonnaise (17.50€) with a pot of a red Côte de Rhône (this time maybe 2 1/4 glasses).  To start I had the Saladier Lyonnais (lentilles aux échalotes, museau de bœuf, pied de veau rémoulade).  I could translate very little of that and, other than lentils, understood none of it.

I loved it.  I oohed and aahed over it.  The description, as it turned out, announced a cold combination of green lentils and shallots in a nice vinaigrette; beef mouth with some sliced cornichons and capers; and veal foot with a remoulade (the part that I assumed at first was potato salad).   It was delicious.  It really was, unaccustomed as I was to that particular combination.  I’d never had beef mouth or that particular part of a calf before, and would never have thought of eating either of them.  The dish involved some surprising textures, as with the veal foot, but the flavor was great.  It would have been very refreshing if I hadn’t eaten the whole thing — it was a lot of food, almost a full meal, even for me, especially with some of their good bread — but who could stop eating with more staring me in the face, taunting me, teasing me?

For my main, I ordered the tablier de sapeur, literally fireman’s cape, one of the classic bouchon dishes.  Always try the local dishes.

It was a big square of a cow’s stomach — tripe — breaded and pan-fried, and served with a sauce gribiche, a very good mayonnaise with capers and some herbs.  I have had little experience with tripe outside of pho, where it has little taste and adds just a nice contrasting texture and maybe some collagen — I don’t know.  But when in Lyon, eat as the Lyonnaise.  The offal taste was stronger than I like, and it frankly didn’t have much else to offer.  The sauce gribiche certainly helped, but I ended up only eating about half of the cape, which I guess would be a normal sized serving outside of a bouchon.

Nancy ordered a dessert — a custard of some sort.  It doesn’t appear in my notes and Nancy, who has other things about which to worry, doesn’t recall it, so I’ll just call it a crème pâtissière. 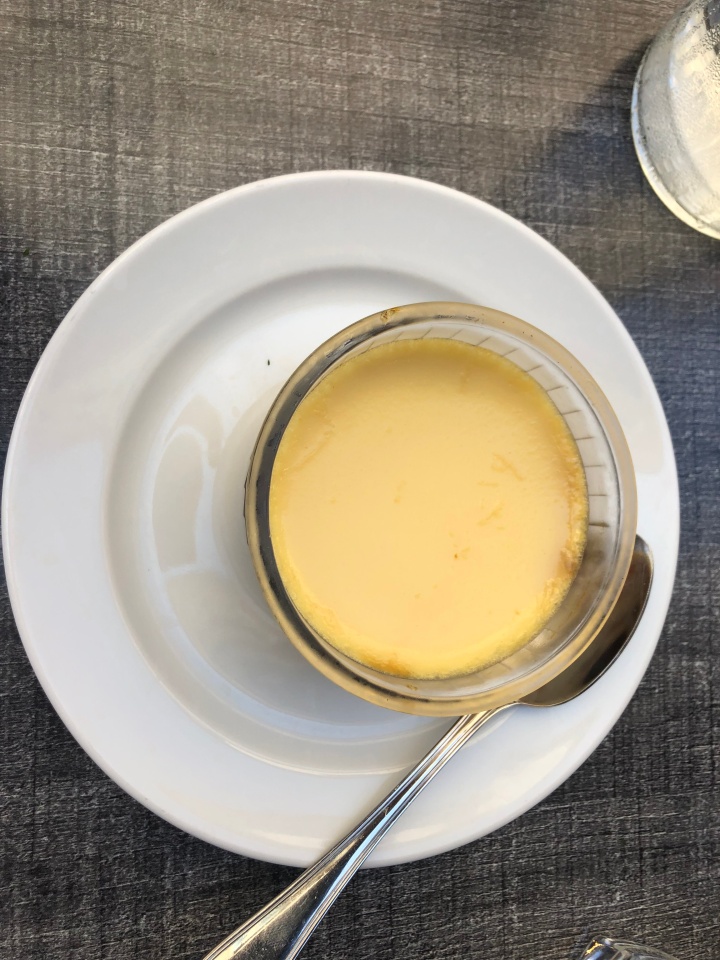 I finished with another Lyon classic, cervelle de Canut.

I had it natur rather than with a raspberry coulis.  It was a tart cheese, not bad but not a lot of flavor beyond the tartness.

All in all it was a good experience.  The salad course was a home run, Nancy’s sausage was very good,  and we sat outside on a beautiful day on an active pedestrian street, perfect for people watching.  Inside, Aux Trois Cochons carries the pig theme throughout the restaurant.  In retrospect, I wish I had ordered the tête et langue de veau, sauce ravigote, pommes vapeur, but then I was focused on getting the classic bouchon experience.  I’m very glad that I tried the salad, which I loved.  As to the tripe, well, sometimes you get the bear, sometimes the bear gets you.

Aux Trots Cochons is worth a visit.  If the weather isn’t perfect, you sit inside, where the Cochon theme is pervasive. 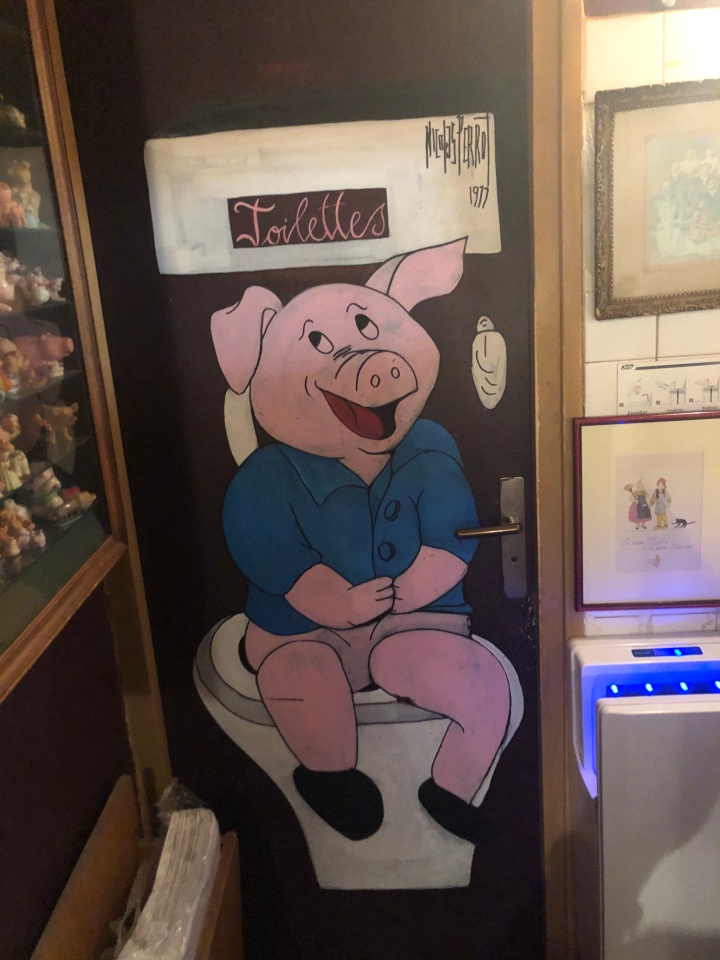 And inside, the owner holds forth, and you can have a very good meal at a very good price, especially if you order wisely.