This is the 13th and final post of our 2019 trip to France.  The number 13 could not be more appropriate.

What do you do when you have to wake up at 2:15 to put out your suitcases to be taken to the bus that will whisk you to the Marseilles airport in the dead of night, and, after a quick flight, find yourself in the Frankfurt Airport with a soul-killing five hour layover.  Why, you walk around the airport like a zombie, of course.

The Frankfurt airport is large and busy, and divided into different “areas.”  Each area is denominated by a letter of the alphabet, and a malign fate led us to area Z.  There aren’t 26 areas: Z was the last place you want to be, the concourse with the sorriest amenities.  You can walk to other, more congenial areas, but then you’ll have to stand in a long line to get your passport checked yet again.

Airports numb our spirits.  After, say, 10 minutes in an airport, I start growing grim around the mouth, with a damp, drizzly November in my soul, and it takes a strong moral principal to prevent me from methodically knocking peoples’ hats off.  Oh, that was Ishmael.  He could take to sea, while I have to wait for my flight.  There is a limit to how much walking and staring at the duty free shops one can do.  It can affect even the brightest, most buoyant personality. 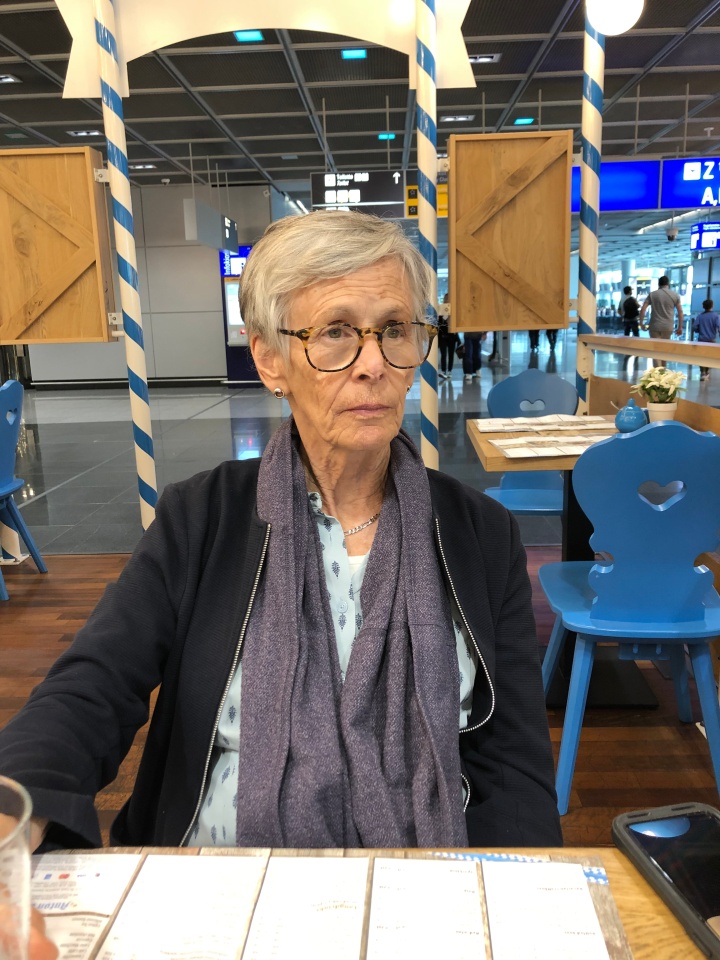 Soon you decide to kill some time by eating.  Eating anything, no matter what you eat, so long as it occupies time.  Nancy and I chose Anton and Anni’s because alone of the facilities on area Z, they had the Lucullan luxury of table service.

The effect is gruesome.  But you’re in an airport.  What can you do?

Anton and Anni’s has, of course, a German menu that they sort of translate into English.

The translations are intriguing.  While the idea of “intensely cheese” sounds good, and a fried egg is welcome anywhere, the lye bun is off-putting.  And slaw with a fried egg?  We were in Germany so we both opted for a German dish.  Nancy had enjoyed the grilled weisswurst when she was in Germany, so we chose the weisswurst with pretzel and sweet mustard.  And I had a beer.  It was almost 10:00 am, and we were in Germany.

To our surprise, the weisswurst had not been grilled.  Unless it is part of a sauce or a complex dish, grilling is easily the best way to prepare sausage for serving, and we both naively assumed that Anton and Anni would grill our weisswurst.  Instead, it was boiled, the method preferred by hot dog carts in the United States.  To their credit, Anton and Anni boiled the weisswurst in a vegetable broth.  To their discredit, the sausage was waterlogged, almost mushy.  It tasted a bit like vegetable broth.  The pretzel was on its way to stale, but the broth perked it up a bit.

We could drag lunch out only so long, and I resumed walking laps in area Z to the tune of the Song of the Volga Boatmen.  Nancy, as always, was wiser. 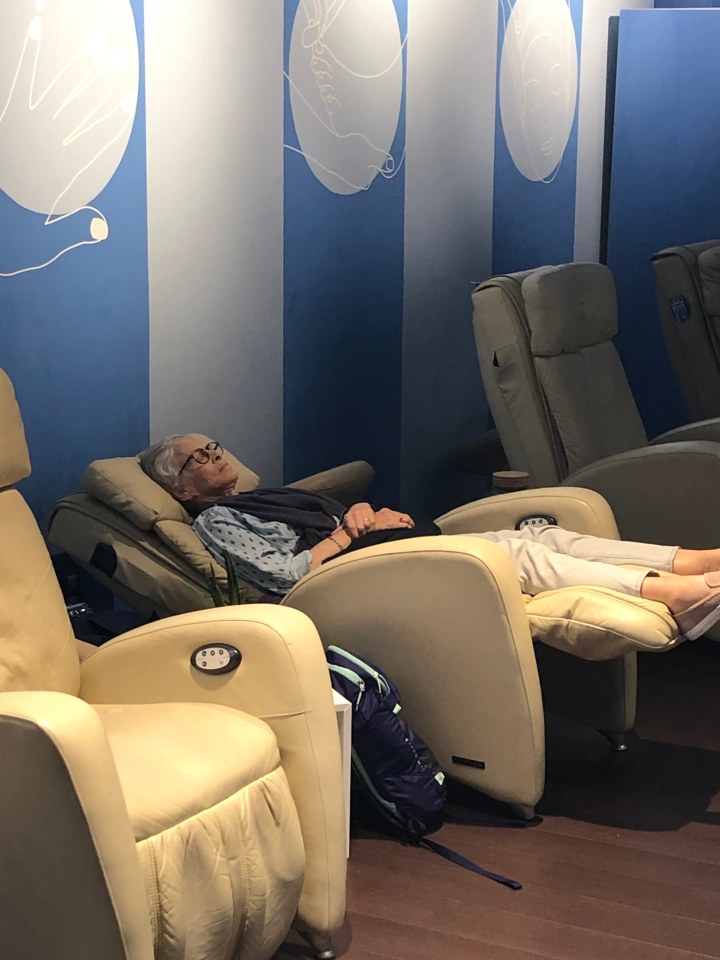 Okay, okay.  I’m whining.  And I’m being unjust to Anton and Anni’s.  The pork knuckle looked pretty good, but I didn’t want that much food, and I wasn’t in the mood to enjoy a pork knuckle or anything else.  I welcome reports on Anton and Anni’s that prove what I believe, that the problem was my mood after getting up so #?*! early and having to be in the airport for so long.

My apologies, Anton and Anni.

One thought on “Anton and Anni’s, Frankfurt Airport, Germany”