I’ve never reviewed a gas station.  I visit gas stations fairly often, but I do so to get gas, use the restroom and, if I do the latter without the former, buy two packs of two-for-a-dollar peanuts or some local specialty.  Many gas stations also sell food, usually hot dogs and the like.  Some also sell fried chicken.  I try to stay away from those foods, although, admittedly, I was at a conference in Washington years ago when the people at the Southland Corporation booth next door shut down and gave me a box of their coupons for free hot dogs at 7-11.  After more than 20 years, the then-neighborhood kids, now grown, still refer to that as The Summer of the Hot Dog.  But I wasn’t the one eating those hot dogs.  Well, maybe a few.

But Lindsey’s is not just any gas station.  It’s right across from the Graduate Hotel in Oxford, and its food has made it into a landmark.

Lindsay’s broke into my consciousness on the Saturday morning of David and Taylor’s wedding.  I ran into my cousin Sinclair Griffin Lee (of the Bill’s Griffins of Wilson, NC), said she was going over to the Chevron station get Eric a tenderloin biscuit.  (Alas, they don’t sell the tenderloin biscuits on Saturdays, and Eric had to settle for a smoked sausage biscuit.)  A bit later, my cousin Scott Griffin mentioned how much he loved his hot chicken biscuit from the Chevron station.

That was enough for me.  I took a frolic and detour from some errand and got a country ham biscuit at Lindsey’s.*

It was delicious.  Country ham biscuits are one of the great foods: they contain country ham, after all.  And Oxford is just on the edge of the Country Ham Belt (Tennessee, Kentucky, North Carolina, and Virginia).   And this was a good biscuit.  It had been wrapped, of course, and that can keep the moisture in and steam the biscuit a bit,  but it was a real, by gosh home-made biscuit.  Scott had asked Ms. Lindsey how she made them, and she replied, “With love.”  A biscuit made with love can stand up to a little steam, especially when it’s reinforced by country ham.

Lindsey’s has a table with lots of breakfast alternatives. 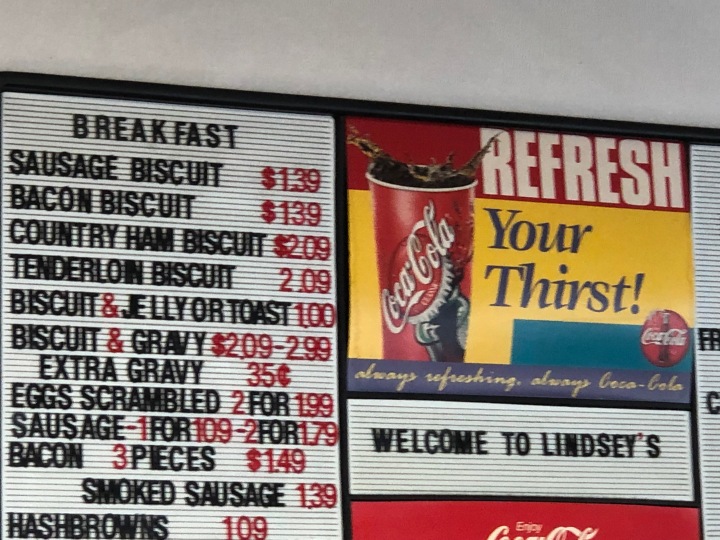 and a small dining area. 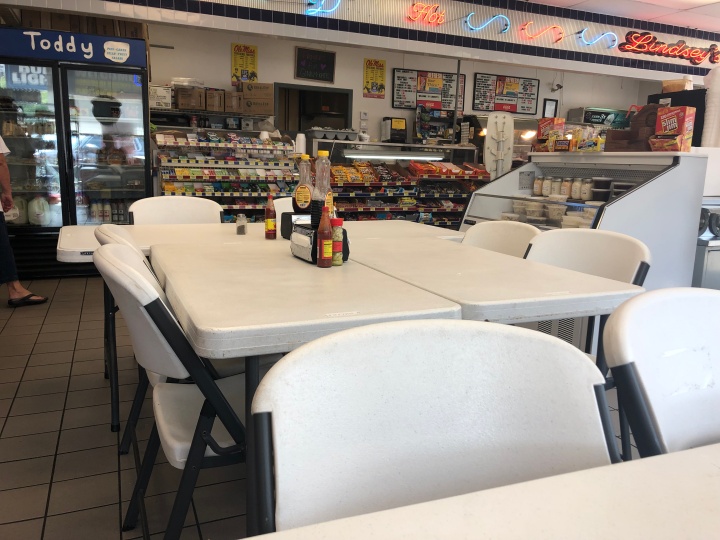 Lindsey’s also has a meat and three bar for later in the day,

Note that they sell chicken tenders to those with debased sensibilities, but they also have honest pieces of chicken, including the noble gizzards and livers.   And there’s a cooler stocked with plastic tubs of both pimiento cheese and chicken salad.  I passed over those, but next trip I’ll snag a tub of chicken salad.  It’s famous, at least in the Oxford area.

Lindsey’s makes their own food, and it is very good food — made with love.

Lindsey’s is not the most famous culinary gas station in Oxford.  That would be McPhail’s Four Corners Chevron.  The foundation of McPhail’s greatness — legend, one might say — is their Chicken-on-a-Stick,  a favorite, especially, as a Bon Appettit writer noted, “after multiple Sazeracs.” I suspect that Bud Lite and Jim Beam also are major sources of the Chicken-on-a-Stick’s popularity.  As the name implies, we’re talking chicken tenders (perhaps the least flavorful part of the chicken) battered, impaled, and deep fried.  The Chicken-on-a-Stick is mainly popular on Game Days and after the bars on the Square close.  The rest of their menu seems appropriate to an alcohol-induced loss of culinary inhibition.

I am not being judgmental here.  I confess that I am not a complete stranger to late night cuisine.  I once went to a King Kastle (imagine a low rent Krystal) in Newark, Ohio, with six fellow Denison University students after the 2:30 a.m. bar closings.  We stumbled in and the waitress said, “What can I get you?”  Someone said, “Hamburgers.”  She said, “How many?”  Someone said, “A hundred.”  Someone else said, “And an order of fries.”  Had we been in Oxford, we may well have ordered 100 Chicken-on-a-Sticks, with results I  would rather not contemplate.  As it was, we polished off the hamburgers — sliders, actually — and the fries.  Years later, we all became respectable members of society.  Today, none of us is likely to patronize McPhail’s other than to get gas.  Gasoline, that is.

Lindsey’s has food that you can eat and enjoy cold sober.  Food you can tell your parents that you ate.   Food that tastes good, that’s made with love.  Next time you’re in Oxford, stop by Lindsey’s.  Let me know how the chicken salad is.

*Well might one ask why I didn’t go to eat at John Currence’s Big Bad Breakfast.  Regular readers will recall that I was coming off the Great Memphis Region Barbecue Sandwich Tour, during which I had eaten at nine barbecue places in four states in three days.  Those who stay tuned will see that I took another frolic and detour for a mid-afternoon snack at a barbecue place, to be sandwiched, so to speak, between lunch and the wedding reception.   “Meden Agan”, as the Oracle at Delphi advised, “Moderation in all things.”  Note:  that includes moderation in exercising moderation.