I was very impressed by the whole hog barbecue places in Tennessee during my Great Memphis Region Barbecue Sandwich Tour.  You will, no doubt, recall my reviews of B.E. Scott’s in Lexington and Ramey’s, in Parsons, the friendliest town in the world.  After eating at B.E. Scott’s and Ramey’s, I was tempted to travel on to Nashville to try Martin’s, but Nashville is not in the Memphis region even by my over-broad definition.  Mainly, though, I really needed to get back to Memphis to try Payne’s.

But all good things come to those who wait.  I recently was able to try the Martin’s down in Birmingham, and can tell you that Martin’s is a star.

The Martin’s in Birmingham (actually the suburb of Vestavia (actually the Cahaba Heights area, best known for Miss Myra’s)) is a branch of the growing Nashville chain of whole hog barbecue places.  There are a half dozen in the Nashville area, two in Louisville, and one each in Charleston and Birmingham/Vestavia/Cahaba Heights.

It’s a new building, but with a nice, smoke-stained corrugated tin addition for the cooking.  You can see smoke coming out of the stack.  Lovely  The place is very roomy, with two sections — a bar-type area and a dining area, separated by a dog trot, and plenty of outside seating.  It’s a nice place. 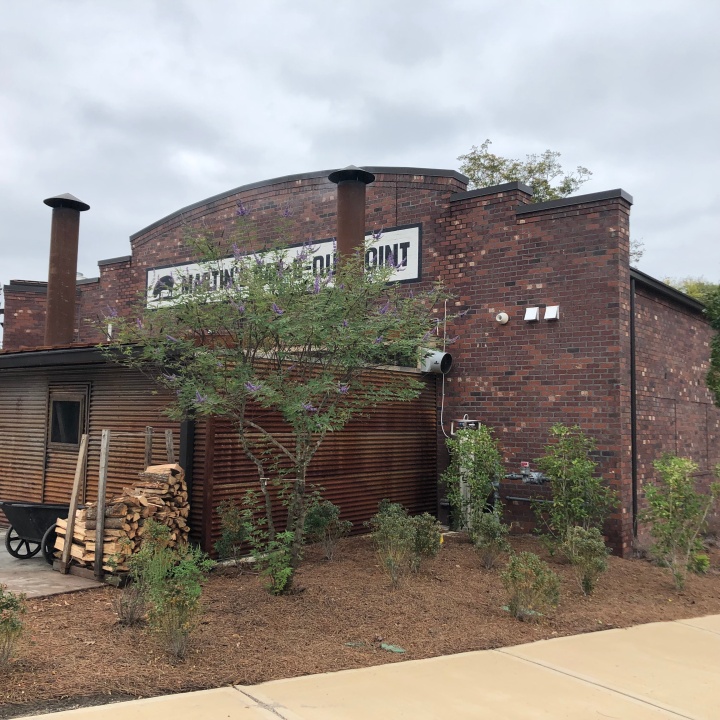 Inside, Martin’s is covered with memorabilia.  You’ll notice the diplomatic inclusion of  both Alabama and Auburn pennants (and a Mississippi State pennant, of all things), as well as photos of JR Ewing, Willie, and Jerry Clower.  Something for everyone. 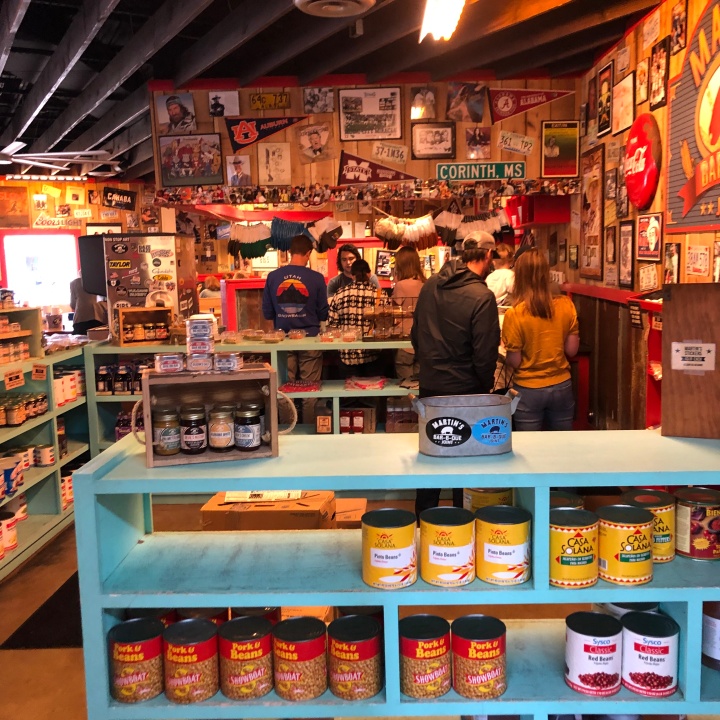 You order at that counter, which also boasts slices of pecan pie and delicious blackberry fried pies.

I ordered pork with green beans and pinto beans. 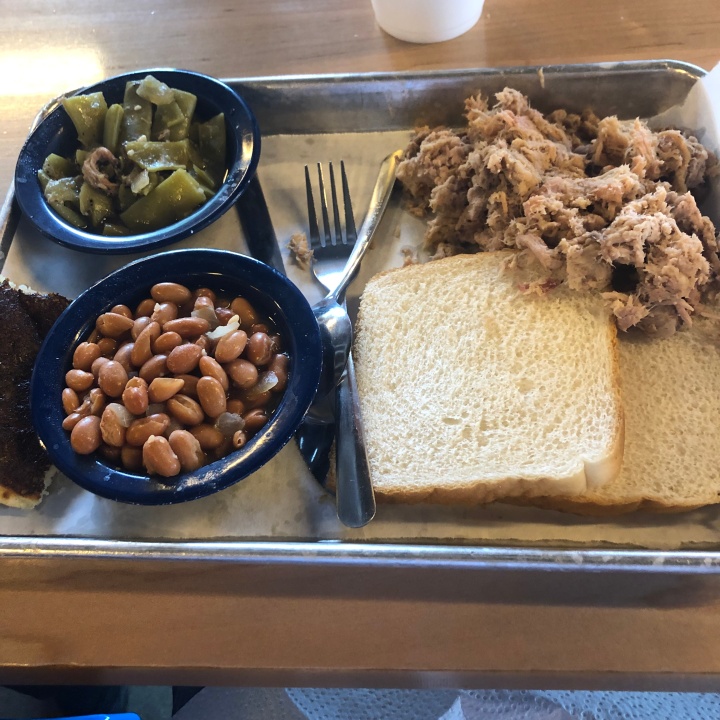 I also ordered a corn hoecake.  Nancy and Addie, Emily and Matt’s daughter, grabbed it and pretty well split it between themselves before I could grab more than a corner.  (I stress that Nancy reasonably thought that it was part of her order, so she had every right to the hoecake even beyond the standard marital joint property right to food on each others’ plates.)  I can see why.  It was very tasty.  If you’re not eating alone, you better order one for everyone at the table.

Having rescued a scrap of hoecake, I was able to turn my attention to my tray.  My customary first taste of pork was a revelation.  Delicious.  It was chopped very fine, and had both a rich pork and good smoke flavors.  I mean it was good — right up there with B.E. Scott’s and not that far from Ramey’s among the Tennesseeans!  Martin’s makes some top notch barbecue, and I’ll give it a Top Place tag.

The green beans also were very good, with a good potlikker that would have married well with a hoecake if there were any left.  Not that I’m bitter.  As it was, I made do with the white bread.  And the pinto beans were good, too, although they could have used another hunk of side meat.  I can’t say that the portions were generous, but the food was very good.  I used a bit of the bread to try their sauce — the meat not needing any.  The sauce starts with a sweetish taste that is quickly followed by the tang of vinegar and a lingering pepper flavor.  It’s a good barbecue sauce.

Nancy and my niece, Emily, both ordered baked potatoes (big, properly cooked through), and Nancy had a cup of brisket chili. I managed a taste of the chili, and it was very good.  It was meaty and well seasoned, with a nice little bite.  You should order at least a bowl, not a cup.

My nephew-in-law (Emily’s husband) Matt ordered brisket tacos.  You met Matt at Rodney Scott’s, the other new whole hog place in shoulder-centric Birmingham.  Matt really liked the tacos.  The meat was good, and the flour tortillas had been pressed and cooked on a dry griddle.  Well done, Martin’s.

My brother David had a pulled pork sandwich.  He thought it had been chopped too fine.  Whole hog generally is chopped more finely than pork shoulder, the traditional cut in Birmingham.  I think — I’m not sure — that the pulled pork at Martin’s is from shoulders cooked separately.  I should have asked.

I had gone to Birmingham in connection with my annual guest lecture at the University of Alabama Honors College for my good friend, Bob McCurley, and, incidentally, for the accompanying Alabama football game.  My trip was a success.  I had some really good barbecue and saw family, which is always good.  And Mack Jones, Alabama’s backup quarterback, acquitted himself well (it was 41-0 at halftime) playing in place of injured Tua Tagovailoa.*

Don’t wait for a guest lecturer gig or for football tickets.  Go to Birmingham and head south out to Cahaba Heights (take a left on the Pump House Road exit off 280) and park at Martin’s.  Or Miss Myra’s, or better, both.  If you eat at both, you might just decide to move to Cahaba Heights.

*Aeschylus noted how danger lurks behind an excess of good fortune, and Alabama’s loss to LSU illustrates his point.