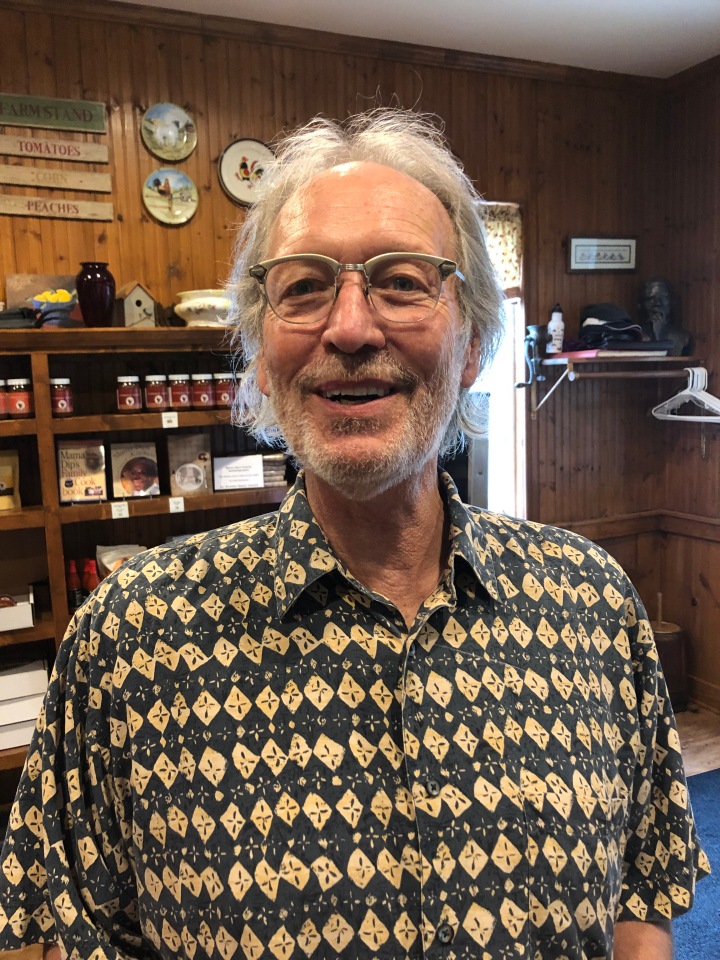 In addition to being delightfully unconventional and hugely funny, Jim is the soul of generosity.  Jim’s from Creedmore, outside Raleigh, and his Momma still lives there.  Jim visits her often, as every son should.  When last we got together, Jim and I were talking about North Carolina barbecue, of course, and I mentioned that, Bill’s having closed, my Wilson cousins, the Griffins (strong Bill’s partisans in the Bill’s vs. Parker’s debate), are now big fans of Marty’s.  Marty himself apparently is a branch of the Bill’s tree.  Next thing I know, Jim appeared on my doorstep with containers of barbecue and Brunswick stew from Marty’s.  I have a good life.

Now, you can’t really judge a restaurant based on food that has been frozen, even when you’ve re-heated it using the essential method for chopped barbecue, put some on a couple of Martin’s potato rolls (I am a convert after a comment on my Captain’s Kitchen post made the scales drop from my eyes), and heated up some of the Brunswick stew.

The pork was quite good considering that it had been frozen and re-heated, and showed well for Marty’s restaurant.  It had a relatively rough chop for an Eastern North Carolina barbecue place, and some pieces had that pink smoke ring hue.  And it retained that whiff of smoke along with the pork flavor.  I added some dill pickle chips for the touch of vinegar and the texture (it’s a Birmingham thing) and just a touch of Scott’s barbecue sauce.  I really enjoyed the sandwiches.

The Brunswick stew looks good, doesn’t it, thick and meaty?  Marty’s tasted like good Brunswick stew but, frankly, I’m usually not a big fan of Brunswick Stew.  I added some —  I guess a generous tablespoon — of Scott’s Barbecue Sauce and it really perked things up.  I really enjoyed it.  The Scott’s made it more like my grandmother’s recipe for Brunswick stew.

I plan to go to Marty’s to give it a try.  It’ll be hard, though.  My nephew, Jimbo Tanner, keeps telling me about new places I need to try in Eastern North Carolina.  The latest is Boss Hog’s Backyard Barbecue in Washington, North Carolina, (there’s another in Williamston over in Martin County) where the  “Brunswick stew and chicken pastry might beat the Q and chicken.”  Things are getting out of hand.  How am I supposed to manage Bum’s and the Skylight Inn in Ayden, not to mention and the other great places in Pitt County (and now Haddock’s in Clayroot); the soon to re-open  Wilber’s: a stop for the corn sticks at Parker’s, if nothing else; plus trying the next places Jimbo finds during duck season?  I’ll have to set aside a week just to get to the beach.  It’s possible that Nancy might have issue with her Principal Assistant Nanny taking that much time off.

But it looks like Marty’s is a must-try for me, and I’ll eventually find a way or make one.  It’s a popular place, as you can see from this photo of the drive-through I pulled for their web site,

and as I’ve heard from the expert testimony of my cousins, especially Sinclair and Eric Lee, whom you met most recently at Noble Smoke.

Those are strong endorsements, and you should give Marty’s a try — and please do report back.