Atlas Obscura had a short article about the pig ear sandwich at the Big Apple Inn,. Perhaps contrary to your expectations if you were thinking “Big Apple” rather than “pig ear”, this Big Apple is in Jackson, Mississippi.  It’s on Farish Street, a few blocks north of the Mayflower.  (I spent a lot of time in Mississippi back when I was doing voting rights work for the Justice Department, so I know Jackson pretty well.)

The Big Apple Inn has been around since 1935 and has gained wide fame for its pig ear sandwiches. 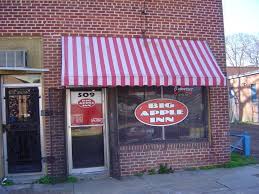 Anthony Bourdain, Guy Fieri, and, of course, Andrew Zimmern, all have made the, uh, pilgrimage.

The menu also includes chopped sausage sandwiches and hot tamales, regular or spicy.  The menu says that they also serve hamburgers, hot dogs, and fried bologna sandwiches, but those get little attention.   And they have chips. The pig ear sandwiches run $1.60 each, which doesn’t seem like much at all.  Actually, though, both the pig ear and the chopped sausage, etc., sandwiches are just sliders, not proper sandwiches.  I’m not really sure about the hot dogs.  A hot dog doesn’t really fit on a slider bun.

I’m sure many of you are wondering how one prepares pig ears.  After all, you might run across some in a store, or see them on sale on Amazon, or you may receive some as a gift, possibly from an ex-spouse.  Here’s the drill: The pig ears go into a pressure cooker for a few hours.  Then, at least at the Big Apple, they’re sliced, slapped on a bun, topped with mustard and slaw and, if you’re smart, a whole lot of hot sauce.

You’re also wondering about the flavor.  Actually, it’s the texture that really hits you.  They’re sort of gelatinous-chewy, with, as the fancy reviewers might say, a distinctive mouth-feel.  At their best, pig ear sandwiches taste like mustard, slaw, and a whole lot of hot sauce.

As you have guessed, my pig ear sandwich at the Tired Texan was a cruel disappointment.  I had assumed that the ear would have been fried or smoked, and that it would emerged crisped, much like the delicious skin of a barbecued whole hog, or perhaps like the remarkable pork skins at Sweet Lew’s in Charlotte.  It was not, and after that first pig ear sandwich, I’ve never had another, not even at the Big Apple Inn.  My Tired Texan experience mainly inspired my recommendation of a whole lot of hot sauce.

I’m not saying you shouldn’t try a pig ear sandwich any more than I’ll tell you not to eat chitlins in a place that looks like it doesn’t clean them thoroughly.   Go ahead, but proceed at your own risk.  And be sure to order a tamale chaser.