Hard on the heels of Independence Day, my travels on behalf of the Campaign for Real Barbecue took me to Richmond.  My research had identified SMoHK not only as a place that cooks exclusively with wood and charcoal, but also as one of the top barbecue places in Richmond.  Serendipitously, SMoHK also played into my decision to research Brunswick stew more carefully, as SMoHK won USA Today’s 2019 Readers’ Choice award for Best Brunswick Stew in Virginia.

I went, alas, with more hope than preparation.  I did manage to find SMoHK, which was an achievement in itself.  It’s in Scott’s Addition, a warehouse district that is now chock-a-block with breweries, lofts, and restaurants.  Only the outside seating area of SMoHK is visible from the street, and the beer kegs create a natural assumption that the space is a beer garden attached to Strangeways Brewing, behind which SMoHK is tucked. 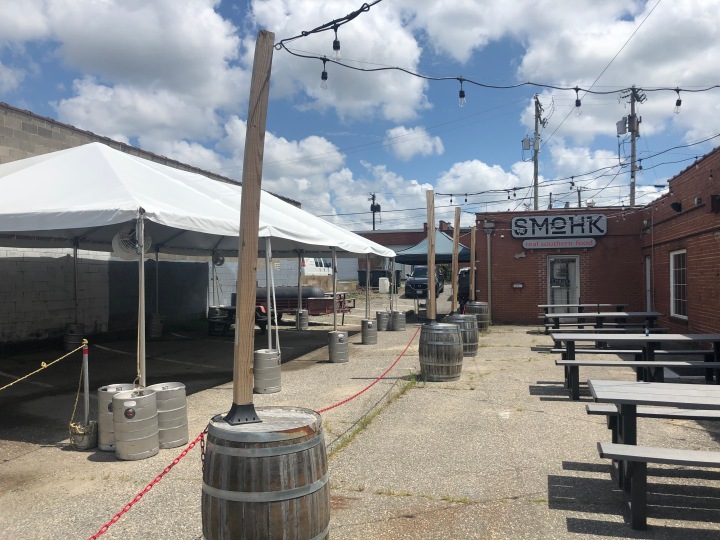 I strolled up to the door and saw two signs:  “Open” and “On Vacation.”  The door was open and people were inside, so I entered.

I was greeted by co-owner and Pitmaster Roby Williams. It turns out that they were supposed to be on vacation but had a big catering call, and were then putting the finishing touches on the order.  Mr. Williams graciously put up with me and took time to chat.

Mr. Williams turned to the barbecue business after a career as an engineer, and after years of cooking barbecue on his own.  People started asking him to cook for them, and his business began with Williams cooking and co-owner Elizabeth Sexton, a professor at J. Sargeant Reynolds Community College, handling the business side.  With the limited seating SMoHK does a lot of catering and carry-out.  It quickly gained a reputation for quality and for large — “gargantuan” to one reviewer — portions.  Roby Williams came up in Radford, Virginia, in the western part of the Commonwealth, and has a strong sense of barbecue traditions.  Roby Williams cooks True ‘Cue, with only charcoal and hickory, and only Virginia hickory.  And despite its urban setting, SMoHK has the feel — a good feel — of an Old School barbecue place.

Mr. Williams, the soul of courtesy, offered me a taste of pork and brisket and, with equal courtesy, I accepted “a taste.  Just a little.”  After all, I had a lot more eating to do.

That’s a taste — just a little?  There was even more before the pork met my fork, which seemed to have a life of its own.  As happens, the photograph took a back seat to the tasting.  The pork was quite good, tender and with a wonderful combination of rich pork and lightish hickory smoke.  I tried a little of SMoHK’s vinegar-pepper sauce on the pork.  It was very good, not over-watered or sweetened, easily the best vinegar-pepper sauce I’d had north of the North Carolina line.  This is pork worth a long drive.

The brisket was also good, tender, and with a good smoke flavor.  It had been resting in liquid as, I suppose, part of the demands of catering.  I didn’t think to ask about it.

SMoHK also serves highly acclaimed ribs (in gargantuan portions), chicken, and ribeye.  And they have a red sauce and a mustard sauce, which I’ll try on my next trip down from Washington (or Cove Point).  I’m really looking forward to a return trip when I can see the place fully opened and operating.  I’m especially eager to try the sides.  The current menu selection is good.  In addition to their award-winning Brunswick stew, SMoHK offers locally sourced greens and green beans, as well as smoked macaroni and cheese and cole slaw.  They also have baked beans.  (I’m not a big baked beans fan.)

You should hustle on over to SMoHK.  Richmond is a very nice place to visit, and SMoHK offers some great food cooked by people who take the time and care to make barbecue the right way.  So go, and feel free to bring me back some Brunswick stew.