We pause after Day 2 of our 3 1/2 day  barbecue-eating trip from Washington, DC, to the beach in North Carolina for a special bulletin.  Wilber’s has reopened, and I drove the two hours up there this morning — Wednesday, the fifth day of business, I think — to give it a try.  I checked on my way down to see if it had opened, and I would have gone sooner except that I wanted to give them a few shake-down days.  I also wanted to avoid the weekend rush.

So up I drove.  It more than two hours, as I had to stop for a new car key/fob, and also to get a My Little Pony (Princess Luna) and some swimming goggles for Ella at Target.  I wisely called ahead to Wilber’s and ordered a barbecue plate with potato salad and cole slaw.  And a pint of barbecue for later. 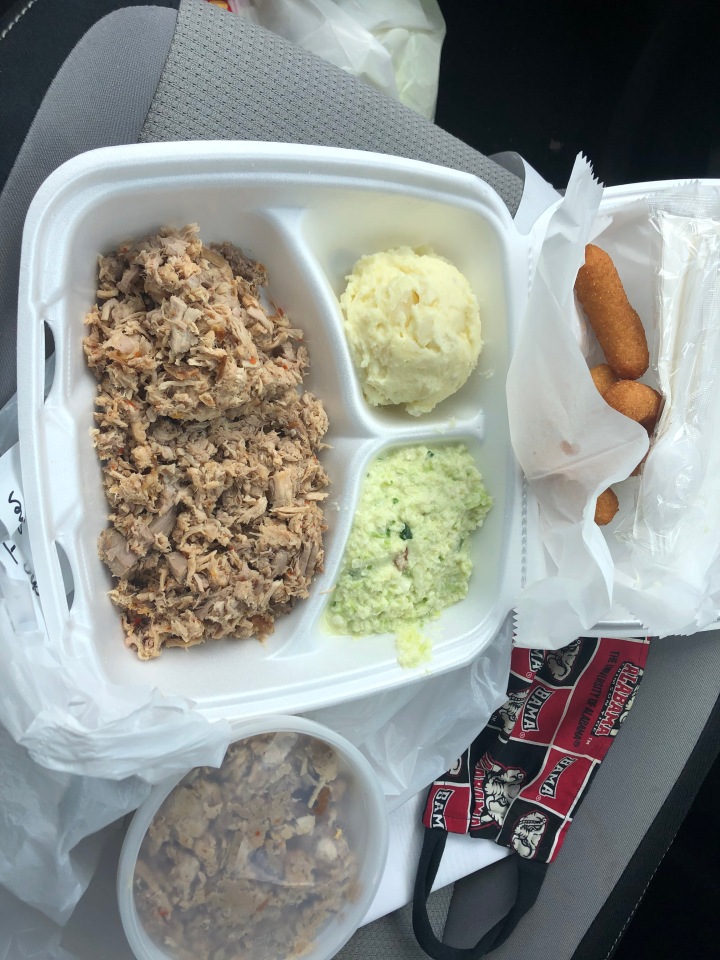 The pork is just as I remembered — delicious, a luxurious combination of rich, gently smoky pork balanced by a delicious vinegar and pepper sauce.  And that’s a lot of pork.  Take a closer look. 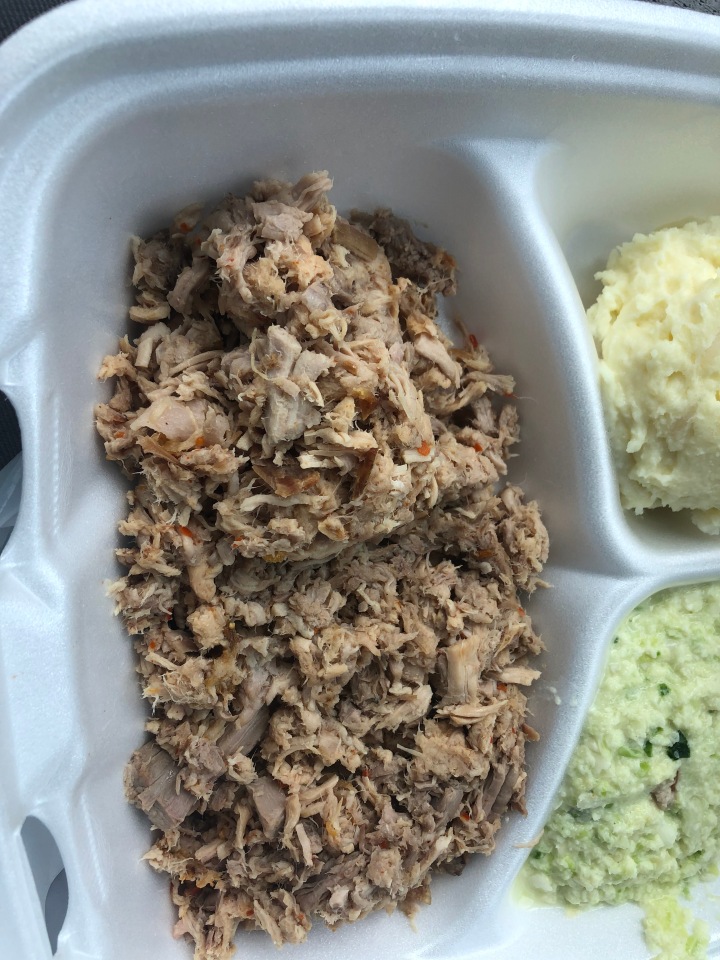 Gorgeous.  Wilber’s is back and it’s as close to the grand old Wilber’s as you can get.  The pork is the same.  The potato salad is the same straightforward potato salad as before, just potatoes and a gentle dressing that doesn’t overwhelm the potatoes.  Nothing fancy, but good.  The slaw is the same, too, another good, refreshing North Carolina slaw.  I’m anti-slaw for sandwiches (try chopped raw cabbage instead), but this slaw is just right to go alongside barbecue.

Oh, and the hushpuppies.  In a word, excellent.  In three words, hot, crisp, and greaseless.
Once again, the new Wilber’s is restoring the old glory.

After I ate, I asked if I could go around back and take some pictures.  I was greeted by  Willis Underwood, a native son of Wayne County, a lifelong Wilber’s fan, and a nice guy — that is, affable and reflexively giving credit to others.  He’s the businessman who organized the local group that has revived Wilber’s, and so far it’s been a huge success.  It’s a well organized operation, with dedicated parking spaces in front for those who call in their orders, and two parallel lines of drive-through with staff taking orders as the cars get into line.  There are a lot of staff for a carry-out operation, and the demand has been huge.  The lines have been long.  Last weekend the traffic overflowed the large parking area and backed up traffic on US 70.  I made a good choice to go early on Wednesday.

Willis gave me a tour of the pits, which are magnificent.  They’re good brick pits, I think three bricks thick, and the covers are loose so that the meat doesn’t bake.  Wilber’s can cook 23 pigs at a time.  Take a look — 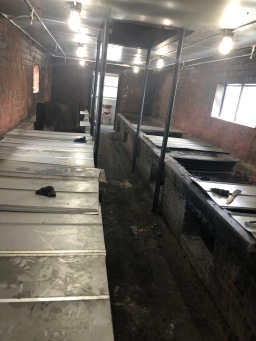 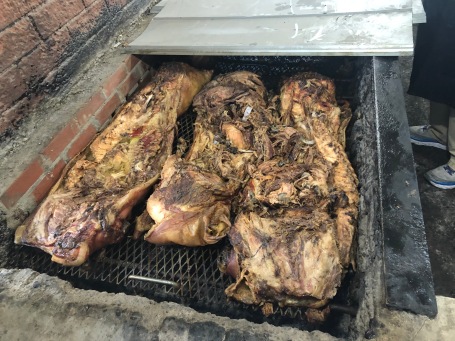 I also learned that Wilber’s had just expanded their menu beyond the original Wilber’s offerings  to include skins, bones, and ribs.  I’ve seen those choices on a couple of barbecue place menus, but haven’t explored them, although the idea of ordering skins always is tempting.  One of the attractions of Bill’s in its glory days was the skin you could snap off the whole hog that lay on the buffet every day and pop it in your mouth.   The skins are pork skin, not fried pork rinds, and they come accompanied by some pork and sauce — 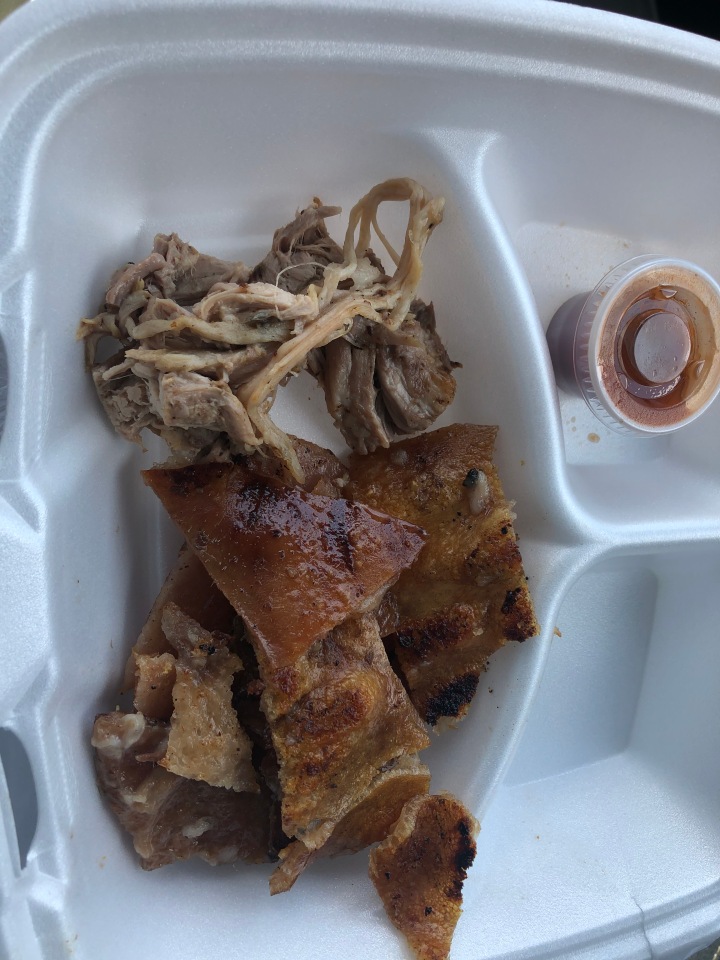 The bones include the outside and other meat attached to miscellaneous bones, again with sauce — 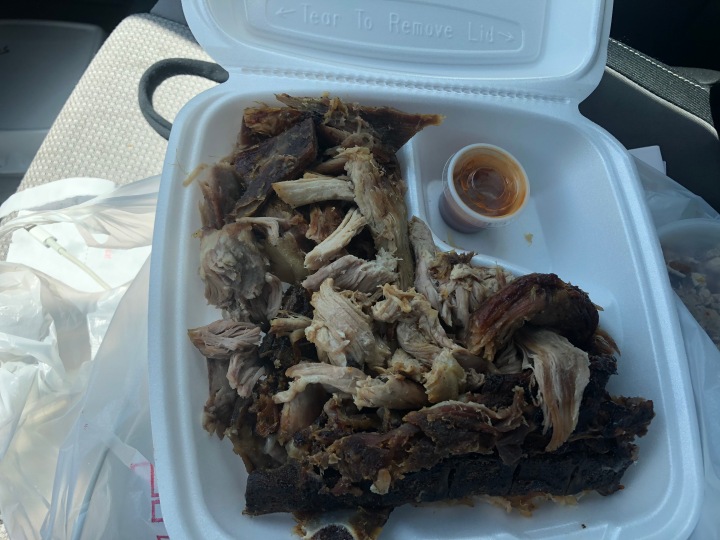 The ribs differ from regular ribs in that they are not cooked separately, but are pulled from the whole hog.  The attraction is the sweetness of meat cooked next to the bone: 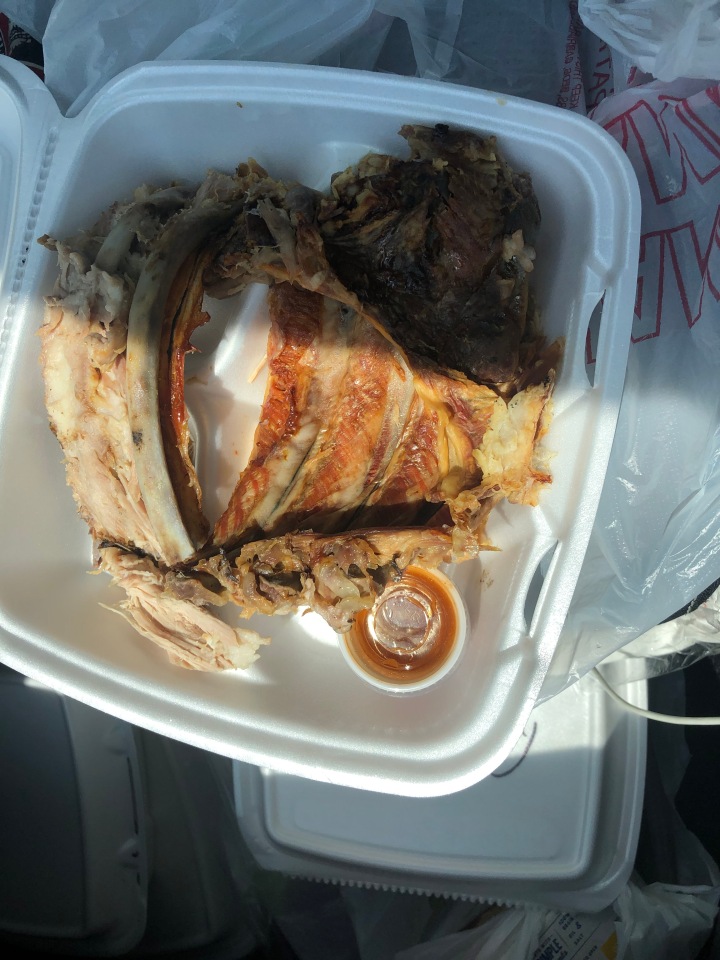 My apologies for the quality of the pictures.  The front seat of my car, much abused on this trip, isn’t exactly a photographic studio.  And, no, I did not eat all of that at once.  But none of it lasted long.  I did feel guilty, though, after my nephew, Jimbo Tanner, asked if I’d tried the chicken.  Have I lost a step?  Well, yeah.  Several.

I snuck a peek into Wilber’s interior, and was happy to see that it has the same paneling, just spruced up, like the rest of the building.  I asked, but Willis couldn’t say when we’ll be able to dine indoors at Wilber’s.  They’re being appropriately concerned for the safety and comfort of their customers.  The pickup operation that I used is very safe and contact free.  You pay by credit card, give your car’s color and make, and roll down your window when they approach to verify your name and then bring your food.  It worked like clockwork.

It was a great outing.  The Wilber’s reopening definitely is a ray of sunshine in a very gloomy year.  As a matter of policy, I’m holding the coveted Top Place tag in abeyance until I can have a normal meal indoors there.  Picture me as checking the news incessantly as I stand by my car anxiously waiting for that day.   Wilber’s is definitely worth a drive from Washington, DC.  Go there and find out for yourself.

3 thoughts on “A First Look at the New Wilber’s Barbecue, Goldsboro, North Carolina”