We went to the Ropa Viejo Grill on our last night in San Juan.  It was right down the street from our hotel, and we passed it on our way to Oceano and Orozco, as well as at other times.   As you can see, it has a large dining area open to the air.  There often was a pretty good jazz saxophonist busking out front, and there always seemed to be pleasant sounds coming from happy diners.  The restaurant’s name comes from a shredded beef stew with vegetables food throughout the Caribbean and Central America.  It translates as “Old Clothes,” a phrase belied by the smartly dressed diners.  So we went.

Things started off very nicely with a complimentary glass of coquito.  It was very good, if not as good as the really exceptional coquito Jordan Chasnoff brought to Christmas dinner at our house.  But it was still good, and a nice start to the meal.

I hadn’t eaten since my gargantuan complimentary breakfast (except for a few shrimp at Oceano, but that hardly counts).  Our waiter, Fernando, suggested that we share the risotto with pork skins.

Risotto with pork skins?  The idea of adding fried pork skins to risotto had never occurred to me, and never would have had I not seen it on the menu.  But Ferdinand recommended it so, what the heck, I ordered it to share with a somewhat alarmed Nancy.  I took a serving, took a bite, and then took another.   Nancy, who was extremely skeptical, took a No Thank You Portion.  She took a bite and then helped herself to more.   We both really liked it, and continued eating until not a scrap was left.  It was creamy with parmesan cheese, and the risotto had that nice al dente texture.  The pork skins were light and added a flavor that was at once pronounced but unobtrusive, if that makes any sense.

For my main course I ordered the “Cabrito Fresco Guisado (El Mejor del Mundo)” at Fernando’s suggestion.  Ropa Viejo translates it as “Goat Stew (Best in the World).”   I chose rice and beans and a salad as sides.

I know that some people in the US balk at goat; indeed, I’m married to one.  Did you know that goat is the most popular meat in the world?  No?  You should get out more.  Of course, many people are barred by faith from eating pork, which easily is the best meat in the world.  Goat has a leg up in sheer numbers, and it is good.

I think of Cabrito as kid, or baby goat, but this was a long way from Easter, so I guess it was no longer a baby.  (While I was at the Justice Department, I dealt with a school district in Kansas that, in their Spanish language election materials, translated school children as “cabritos,” which tickled me.  Not that kind of kids.  When I pointed it out, they changed their translator.)  At any rate, this goat, whatever its age, was in its prime.  The meat was delicious, fork tender with a lovely rich flavor.  Fernando was two for two.

Nancy ordered the grouper meunière  — grouper lightly dusted in flour and sautéed in brown butter with parsley and lemon.  And capers if you’re lucky.  I love the preparation, and might have ordered it myself had I not chatted with Fernando. 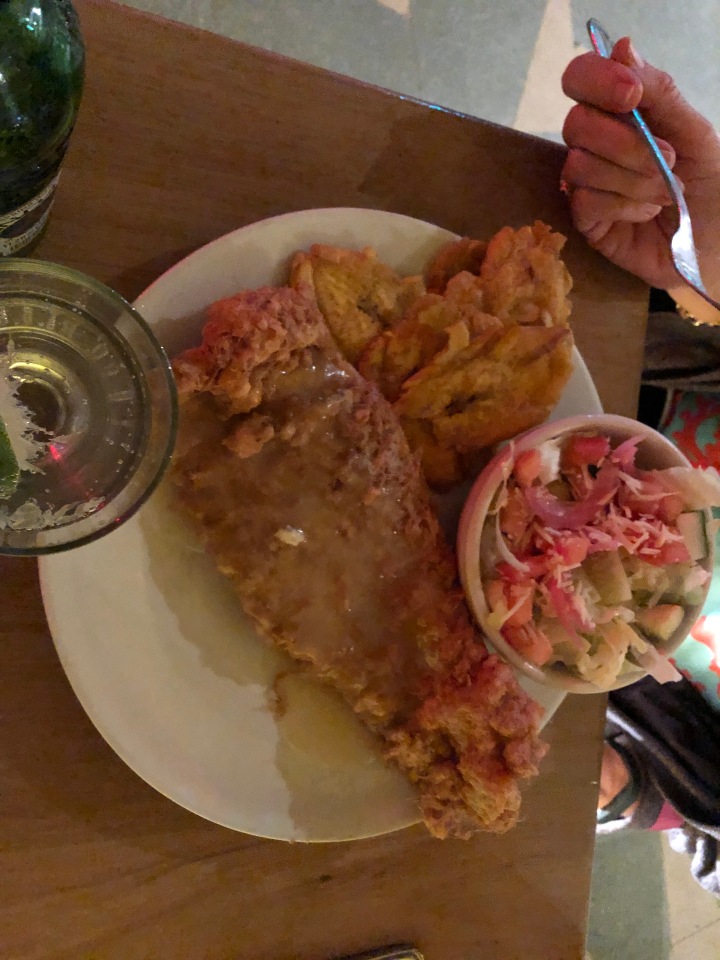 As you can see, it was horribly over-breaded, with the crust thick enough to prevent any of the sauce from actually contacting the fish.    Finding the fish itself was an exercise in spelunking, and once found, the fish was unpleasantly soft in texture.  It was a big hunk of grouper gone to waste.  So sad.

The tostones were just okay and the salad was meh.  The first glass of wine I tried, a rioja, was not very good, so I tried a glass of Joel Gott cabernet, which is usually pretty good.  It apparently had been mishandled, however.

I would go back to Ropa Viejo, but I would not consider ordering anything breaded.  And I would ask to make doubly certain that there was no breading.  Go there and try the things they brag about, the mofongo stuffed with ropa vieja (“El Mas Famoso del Puerto Rico”) or the “Ropa Vieja a la cubana ¡Del Mejor Sastre!” — old clothes by the best tailor.  I like that.  And I might have a rum drink while perusing the menu, and either trust Fernando on the wine or stick with beer for the meal.

Go to Ropa Viejo, but order with care.