Undeterred by the debacle of my Wednesday evening meal, I began Thursday filled with resolve and a very good free breakfast at the Winston-Salem Marriott (a very nice hotel, by the way) and  headed west to Little Switzerland, North Carolina.   The Switzerland Cafe there is on both the Our State list of 26 Essential NC Barbecue Places and the Campaign for Real Barbecue list of places in North Carolina that cook with wood.

As the name “Switzerland” suggests, the trip took me to the mountains of Western North Carolina — a long  drive through lovely country with not much traffic and with the constant occupation of trying to find a radio station I liked.  I left the interstate at Marion and headed up into the mountains.  The winding road got more and more interesting as I neared my destination.  My GPS started telling me to “take a sharp left turn” in 2 miles, then “one mile,” then “a half mile,” and then every few hundred feet.  The interest in an otherwise mundane computer announcement grew from the fact that to my left was nothing but a wire guardrail and a sheer drop of several hundred feet.  I enjoy watching cars go over cliffs and bursting into flames in movies, but I have no ambition to be in the doomed car.  Fortunately, when GPS sternly commanded me to “turn now” there was an actual road on which to turn, and there sat the Switzerland Cafe, perched upon the edge of  a sheer drop.

It was a welcome sight.  I pulled into the parking lot and my heart leapt as I saw a pile of wood and a small separate smokehouse. 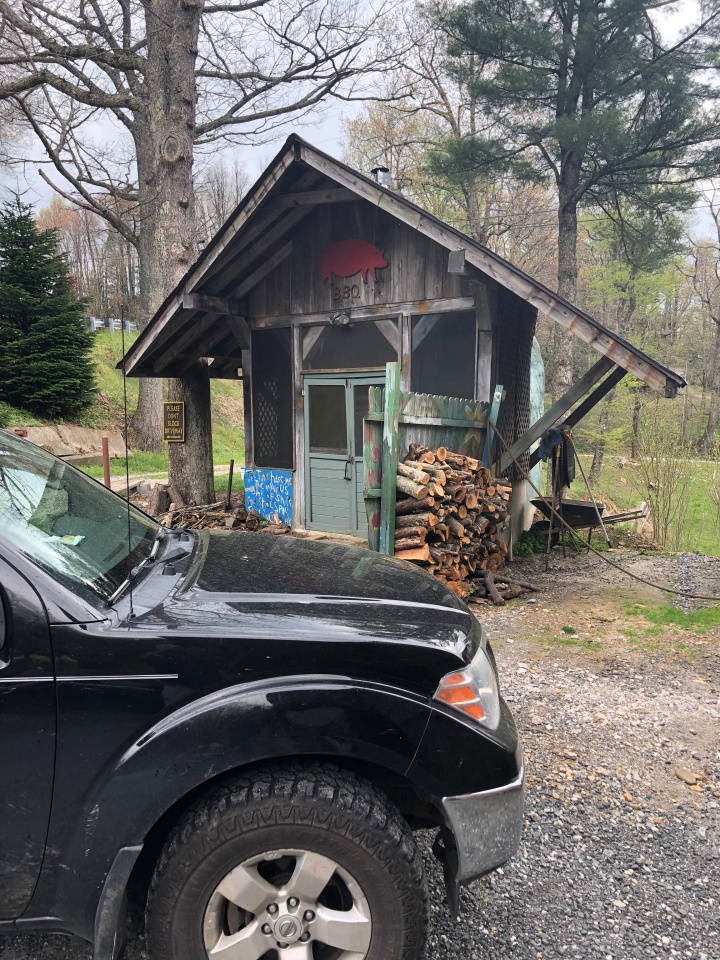 The Switzerland Cafe is in a stone and frame building that fits in nicely with the mountain setting.  There are a couple of stores adjacent to the Cafe.  It looked promising. 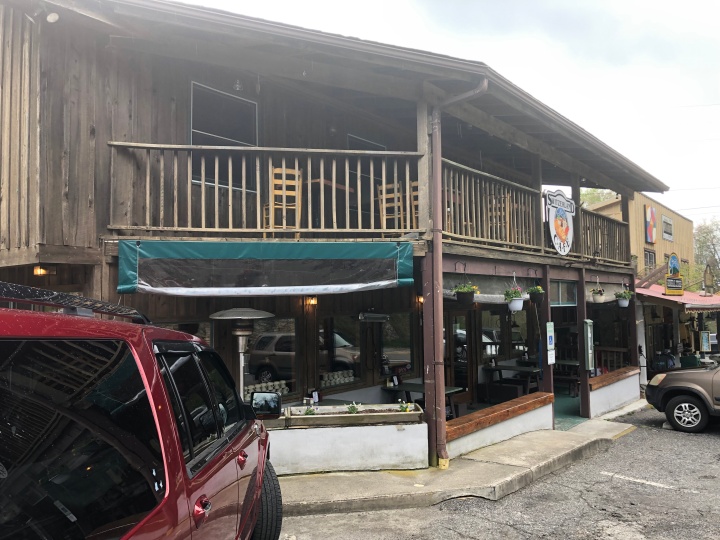 The interior is stone and beam with wood paneling.  The  Switzerland Cafe offers a wide selection of beers, presumably for passengers rather than drivers, and the service is as swift and friendly as you could hope.  I ordered the pork with a double helping of slaw.

As you can see, that’s a whole lot of pork.  You probably also can see that it was mixed with a good bit of sauce that included something dark, perhaps Lee and Perrins.  Whatever it was, it overcame the pork and smoke flavor with a taste that didn’t particularly appeal to me.  (Your views may differ.)  It wasn’t that the sauce had too much sugar, the besetting sin of barbecue sauces; indeed it was nice and peppery.  The sauce  did include a lot of oil, enough, indeed, that in the cool air it started to congeal before I gave up on it. (I don’t think it was fat from the meat, which seemed well trimmed.)

The slaw was good and the cornbread was very good, and I saw some really good looking pies and cakes on display.   There’s talent there, and I wouldn’t write off the Switzerland Cafe based on their barbecue.  It has a much broader menu.  You can get  a whole trout or smoked chicken tacos or a hot-smoked salmon BLT or a quiche.  I guess I should have known not to order barbecue in a place that sells quiche.  What I really wish I had ordered is their New South Pimiento Cheese.  (It seems to be Old South pimiento cheese with even Older South bacon).  Now that sounds good!