Let me start by  acknowledging that people generally prefer the style of barbecue that they grew up with — pork of beef, East or West North Carolina, and on and on.  Let me also state that Memphis is a great and widely respected center of barbecue, that Central BBQ is one of the top-rated barbecue places in Memphis, and that Central is on many of the national “Best” lists.  I also acknowledge that Central BBQ has mastered the wonderful art of cooking pork over wood.

I went to the Central BBQ location on Central Avenue for an early dinner as stop #2 on the Great Memphis Region Barbecue Sandwich Tour.  My afternoon had been disappointing.  After enjoying lunch at Abe’s immensely, I had driven to Helena, Arkansas, in search of some more Delta hot tamales (see my Abe’s post for background).  Helena has so fallen from its glory days that the only place with really good tamales is only open on Friday and Saturday, and here it was Tuesday, and I would be tied up in Oxford, Mississippi, on Friday and Saturday, an hour and a half away.` I was crushed.  I next went to Payne’s for the sandwiches so admired by seriouseats, and celebrated in Saveur’s BBQ Nation series; but Payne’s was closed as well.  Nil desperandum.  (That’s Latin for “no problem.”  I’m a recovering lawyer.)  Memphis is full of famous barbecue places, Central BBQ was nearby, and Southern Living put Central in its 2019 Top Ten in the South list.  This assurance of good barbecue revived my spirits, and my heart leapt as I drove up.

Even lovelier than the crepe myrtles was the pile of wood on the side. 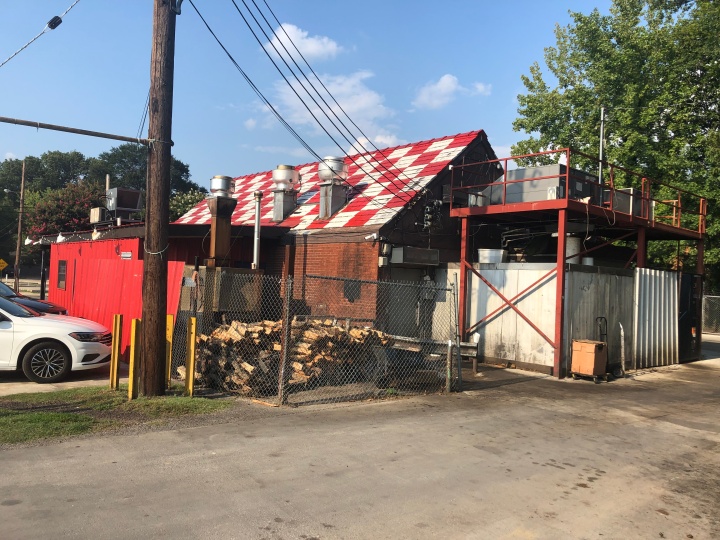 The place was busy, but I got through the line in good time, got up to the window, and ordered a pork plate with greens and green beans.  I know, this is supposed to be the Great Memphis Region Barbecue Sandwich Tour, but I saw “greens” and “green beans” and forgot.  (A growing boy needs his vegetables.)   They gave me one of those little stands with a number, and  I sauntered over to another window where I picked up a local Cat Nap IPA and a cup for water.  I found a table and eagerly awaited my meal.

My plate arrived in no time.  Voila —

That’s a lot of pork.  Let’s take a closer look.

I took a preliminary taste of the undressed pork — that bit over on the left front to be precise — and it was very good.  It was tender with both smoke and pork flavor, and the serving overall had a good bit of the outside bark.  Very good.

Do you see that thick barbecue sauce poured over that well-cooked pork?  Of course you do.  How could you miss it?  It covers almost all of the meat.  And it just ruined it.  The sauce was dominated by corn syrup with seasonings to make it taste like (shudder) molasses.  If it were any sweeter you could put it on pancakes.  The sauce utterly overwhelmed the flavor of the meat.  Think of watching your favorite singer performing live and competing with an unskilled but enthusiastic brass band.  The sauce at Central is “more cowbell” turned up to 11.

In fairness, Central BBQ offers Louisiana hot sauce and pepper vinegar, and they can help sharpen the sauce (although their claim that “one drop does it” is nonsense). 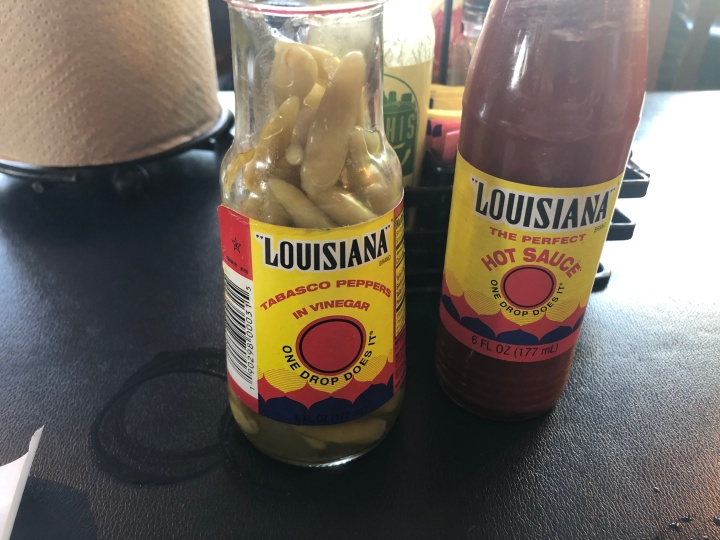 The side dishes also disappointed.  The greens were just okay, and the green beans tasted canned.  Both cried out for fatback.  The plastic cups in which they were served are, of course, terrible for the environment.  On the bright side, they are better than the usual bowl if, hypothetically, one were inclined to pick them up and drink the pot likker in the absence of corn bread.  Just sayin’.  And I do give Central BBQ credit for having some green vegetables available.  I didn’t see a lot of those on the Great Tour.

The Cat Nap IPA was a lonely bright spot.  I was happy to support a local enterprise.

After pushing the food around a bit, I  abandoned the plate, went back to my hotel, and had a bag of microwave popcorn.

Now I’ve made a lot of people mad.  I acknowledge (back to acknowledgements) my barbecue privilege:  I grew up among abundant wood-cooked pork and vinegar-based sauces.  Other barbecue sauces reinforced my preference — my bias, if you will — for vinegar-based sauces.  As it happens, my bias is supported by science, as discussed in Scientific American here.  As Dr. Bouzari, the noted biochemist, explains, the goal of a sauce is to add sourness to balance the richness of the meat.  You can get that sourness many ways, from vinegar, as in North Carolina; hamburger dill pickle chips, as in Alabama; mustard, as in South Carolina; or onions, pickles, and pickled jalapeños, as on beef in Texas, NOT from sugar.  The sour element is especially vital with pork, the richest meat.

If you lacked my privileged upbringing, if you grew up eating ultra-sweet barbecue sauce, it is understandable that you might like treacle on oven-cooked “barbecue”.  You are far from alone, and this is America where we can, and do, eat whatever we want.  I am the first to admit that I eat lots of things that some people find appalling.  It breaks my heart, though, to see food that has been labored over with consummate skill for hours on end under hard, hot conditions, subjected to an ignominious death by drowning in a glop that undoes all of that craftsmanship.

How many of you are offended?  Show of hands.  Wow.  Well, calm down.  Central BBQ does not need my blessing.  The parking lot was full of cars, many with out-of-state tags.  And, if pressed, I would go back to Central, but I would ask for them to hold the sauce, and I discretely would bring some vinegar-based sauce with me.  The meat at Central is good.  It deserves a decent sauce.