UPDATE:  This is a sad, sad day.  I just learned from the Barbecue Bros that Smiley’s has closed.  The dread North Carolina Department of Transportation has claimed another victim.  I really liked Smiley’s.  It was one of he places that made Lexington, North Carolina, one of the great barbecue destinations.  It is my sincere hope that Smiley’s, like Wilber’s, will rise from the ashes.

Note that I have refrained from comparing NCDOT to Vladimir Putin.

It was all the more troubling, therefore to read a report on Spectrum News that the State of North Carolina Department of Transportation — the dread NC DOT — has decided to put two more barbecue places out of business for no better reason than to improve traffic flow.

Here they are:  Smiley’s Lexington Barbecue 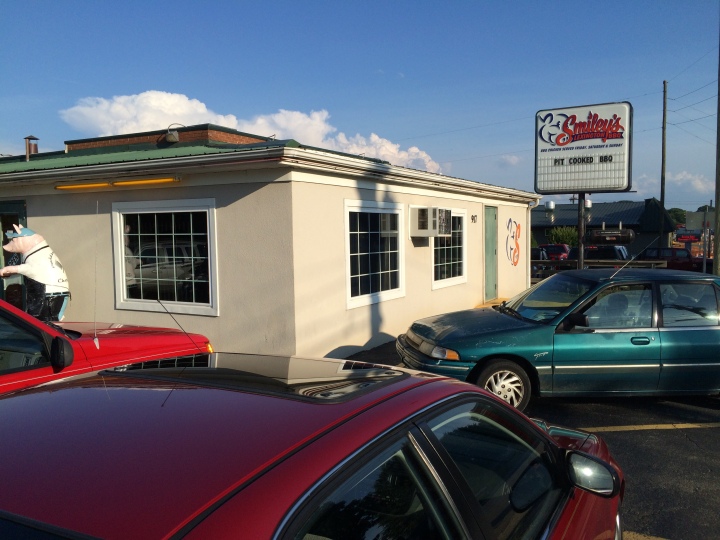 and Speedy’s Barbecue of Lexington 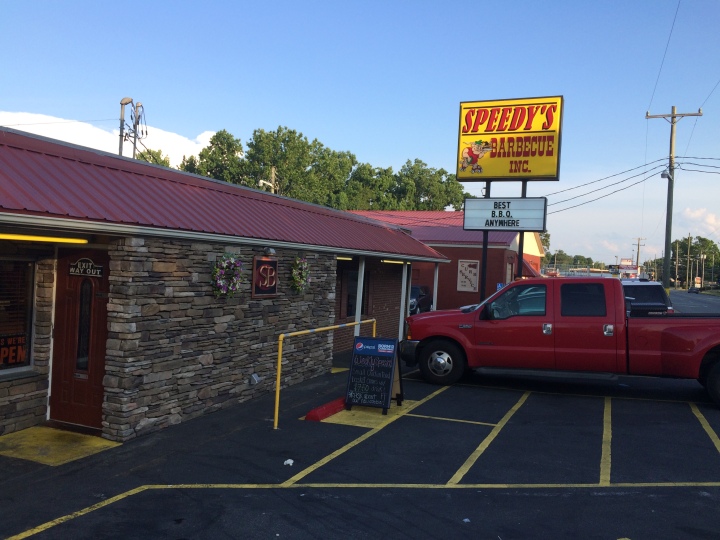 (not to be confused with Speedy Lohr’s, which I really need to try) are about four blocks apart on Winston Road in Lexington, North Carolina, just above 70/Old 85.

You’d think NC DOT would have become sensitized to the collateral damage from their projects after The Great Wilber’s Debacle.   Wilber’s, of course, was the stuff of legend, a temple of Eastern North Carolina barbecue, conveniently situated on the eastern end of what NC DOT once built as a US 70 bypass.  Like all good citizens, Nancy and I used to stop there on the way to the beach for a great lunch and to buy produce from the farm stand out front.  NC DOT constructed anther bypass from 70 west of Goldsboro to well east of town, well past Wilber’s, without adding directions to Wilber’s or even a sign at the appropriate exit (US 13) directing a hungry public to Wilber’s.  NC DOT also failed to alert GPS of their new road, so we found ourselves driving through what our GPS told us were farms and fields.  I managed to find Wilber’s, but many other travelers lacked my single-minded determination and sped on beachward.  Wilber’s business fell off, and next thing you know, there was that silly tax issue.

NC DOT, careless of the thousands of victims of The Great Wilber’s Debacle, now turns its guns on Lexington.  NC Dot has determined that the Smiley’s-Speedy’s section of Winston Road apparently gets a fair amount of traffic.  Of course it does.  It contains two barbecue places.   Smiley’s has very good barbecue — and this being North Carolina, people often slow or stop to let others turn left into barbecue places.  People know how important and urgent barbecue can be, particularly in Lexington, one of the world’s great barbecue meccas.

I admit that my viewpoint could be colored by the fact that I live in an area where bumbling local governments actively discourage traffic flow, and do so with an efficiency unknown to their other functions; and where great barbecue places are a forlorn hope.  Still, anyone who has eaten at Smiley’s in particular must think that NC DOT has gone mad, especially since, as Garden and Gun has noted, many long-time North Carolina barbecue places have closed lately.  It’s not just Wilber’s, but also Bill’s and Allen and Son.  And it looks as if Jack Cobb also has closed.

Where is NC DOT’s sense of priorities?  What is more important, traffic flow or maintaining North Carolina’s barbecue heritage?   And, really, is there any way to avoid traffic near good barbecue places?  No.  A practical approach would be for NC DOT to pay to relocate Speedy’s — at a mere fraction of the cost of widening a road — to an area of town that lacks a barbecue place.

While Texas is actively building barbecue skills among the youth of Texas by making a barbecue a varsity sport, North Carolina is bulldozing its greatest asset.  I can’t help but think that Cherie Berry would never, never let this happen.  Of course, she’s an elected official, directly responsible to the voters, most of whom in North Carolina understand  that the true value of good barbecue places is at least as great as that of a working elevator.  NC DOT is a faceless bureaucracy, run by an appointee (a political payoff to PETA?) remote from the people.

Gov. Cooper needs to clean house at NC DOT, and perhaps bring in former US Transportation Secretary Anthony Foxx, who has a record of putting barbecue before politics.

*I avoid comment on any and all state legislatures as a matter of policy.  This is a family blog.

4 thoughts on “Is the North Carolina Department of Transportation Anti-Barbecue?”