My favorite, or certainly one of my favorite, barbecue meals ever was at Red Bridges Barbecue Lodge.  You can, and should, read that review here.  It was on Day 2 of my three-day, three-a-day North Carolina Piedmont Tour de Barbecue a while back.  So while we were in Charlotte for the Griffin – Duckworth wedding, Nancy and I decided to drive to Red Bridges for an early lunch on Saturday.  Okay I decided, but Nancy said “Sure” with her usual grace and resignation.  It was only a bit over an hour and a quarter away from our hotel — far less than the two hour drive for my last visit.

Why my favorite barbecue meal ever?  Even after I waxed poetic about Lexington Barbecue #1?  First of all, Red Bridges has great, great barbecue.  The difference in the level of quality between Lexington #1 and Red Bridges is infinitesimal.  And the pork comes with top notch, I mean top notch, hushpuppies and slaw.  And very good fries.  The plates also come with baked beans — I’m not a fan of baked beans — but they’ll substitute more of that great slaw or green beans or some potato salad for the beans.  And while Red Bridges isn’t nearly as well known as many other barbecue places, a few years ago it won the Garden and Gun Barbecue Bracket (during March Madness), and Garden and Gun has a pretty barbecue-knowledgeable readership.  Along the way, Red Bridges beat the Skylight Inn, Lexington Barbecue #1, and SAW’s, each of which is considered by many reasonable people, and a fair number of unreasonable people, to serve the best barbecue in the universe.

Also, I had lunch with Mr. Joe Champion, who happened to be sitting next to me at the counter.  We naturally struck up a conversation, and he was a delightful lunch companion.  He introduced me to the Webbs, mother Debby, son Chase, and daughter Rachel Webb Ramsey, the third generation of the family to cook great barbecue at Red Bridges.

I was on the lookout for Mr. Champion when we arrived, but we were there early, shortly after they opened at 11:00, and missed him.  If you see him, say hello for me.

We sat down and I ordered a pork plate with slaw and green beans. 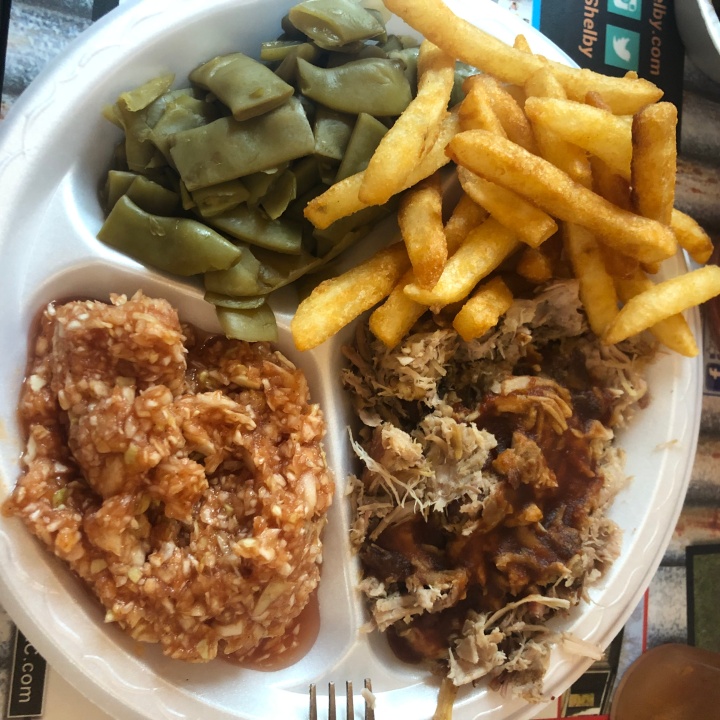 They always give you fries unless, like Nancy, you ask for potato salad instead.

And we got some hushpuppies. 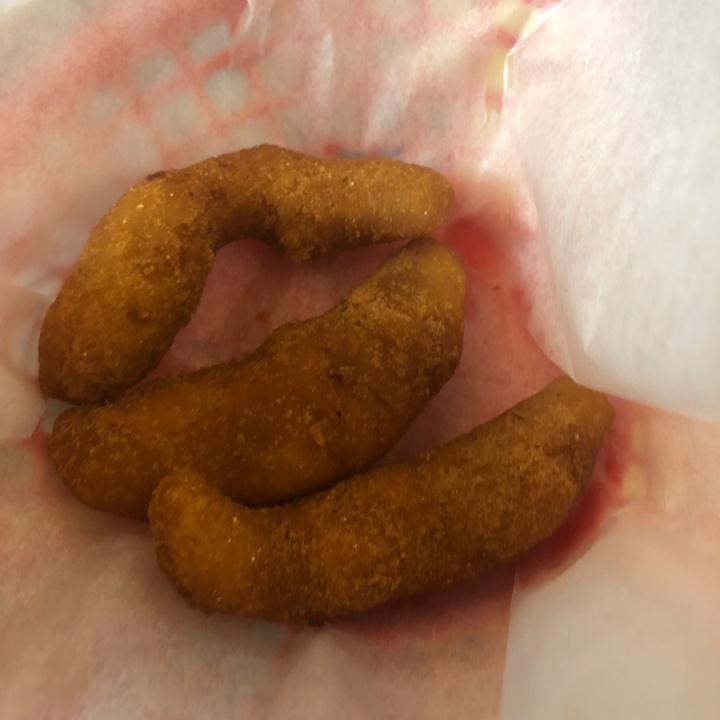 They give you more than that, but I reached for the hushpuppies and ate a couple before I reached for my camera.  First things first.  Those are large hushpuppies, much longer than you usually get.  They are delicious, with a nice crunch and very good flavor.  Great.

The pork was even better.   What do you want from pork?  Smoke flavor, rich pork flavor, moist and tender meat.  Red Bridges has it all.

The slaw is excellent, the green beans are good, the fries are very good, and the potato salad was very good, missing only, as is often the case, the crunch of celery to go along with that good potato flavor.

I had thought about using this trip to resolve the issue of which has the best barbecue in North Carolina, Red Bridges or Lexington #1.  I’ve decided it’s a fool’s errand, and fool though I am, I’ll abandon the effort, at least for now.  Both have great barbecue, and  unlike Bum’s and the Skylight Inn, located as they are within hollerin’ distance of each other in Ayden, North Carolina, Red Bridges and Lexington #1 are too far apart, really, to do a side-by-side comparison.  I’ll just eat at each of them every chance I get.

Go to Red Bridges Barbecue Lodge.  If you’re not headed that way, it is well worth a detour, easily worth the drive from Charlotte.  Go and have some of the best barbecue you’ve ever eaten.